Clonidine
Not to be confused with clomifene or Klonopin.

Clonidine is a sympatholytic medication used to treat medical conditions, such as high blood pressure, some pain conditions, ADHD and anxiety/panic disorder. It is a direct-acting α2 adrenergic agonist.

Clonidine has been investigated and prescribed first as an antihypertensive drug in the 1950s. It has found new uses later, including treatment of some types of neuropathic pain, opioid detoxification, sleep hyperhidrosis, and as veterinary anaesthetic drug. Clonidine is used to treat anxiety and panic disorder. It is also FDA approved to treat ADHD. It is becoming a more accepted treatment for insomnia, as well as for relief of menopausal symptoms.

Clonidine is increasingly used in conjunction with stimulants to treat attention-deficit hyperactivity disorder (ADHD), for which it is administered in late afternoon or evening for sleep, and because it sometimes helps moderate ADHD-associated impulsive and oppositional behavior, and may reduce tics, a problem in which a part of the body moves repeatedly and suddenly.[1] Clonidine can be used in the treatment of Tourette syndrome (specifically for tics).[2] Clonidine along with Methylphenidate has been studied for treatment of ADHD. [3][4] In 2010, the Food and Drug Administration approved the use of clonidine either as an adjunct to traditional stimulant therapy or as a monotherapy in the treatment of attention deficit hyperactivity disorder (ADHD).

This medication may also be used to ease withdrawal symptoms associated with the long-term use of narcotics, alcohol and nicotine (smoking). In addition, clonidine has also been used for migraine headaches and hot flushes associated with menopause.[5][6]

Clonidine is regularly prescribed to help alleviate opiate withdrawal symptoms. It is mainly used to combat the sympathetic nervous system response to opiate withdrawal, namely tachycardia and hypertension, in the initial days of withdrawals.[7] It helps take away the sweating, hot/cold flushes, and general restlessness. The sedation effect is also useful although its side effects can include insomnia, thus exacerbating an already common feature of opiate withdrawal.[8]

Clonidine also has several off-label uses, and has been prescribed to treat psychiatric disorders including stress, sleep disorders, and hyperarousal caused by post-traumatic stress disorder, borderline personality disorder, and other anxiety disorders.[9][10][11][12][13][14][15][16][17] Clonidine is also a mild sedative, and can be used as premedication before surgery or procedures. [18] Its epidural use for pain during heart attack, postoperative and intractable pain has also been studied extensively.[19]

Clonidine has also been found to prolong the effects of analgesia when used together with a local anesthetic such as ropivacaine or levobupivacaine.[citation needed]

Clonidine treats high blood pressure by stimulating α2 receptors in the brain, which decreases cardiac output and peripheral vascular resistance, lowering blood pressure. It has specificity towards the presynaptic α2 receptors in the vasomotor center in the brainstem. This binding decreases presynaptic calcium levels, and inhibits the release of norepinephrine (NE). The net effect is a decrease in sympathetic tone.[20]

The antihypertensive effect of clonidine is due to agonism on the I1-receptor (imidazoline receptor), which mediates the sympatho-inhibitory actions of imidazolines to lower blood pressure.[citation needed]

Clonidine is typically available as tablets (Catapres, Dixarit), as a transdermal patch (Catapres-TTS), or as an injectable form to be given i.m., i.v. or epidurally - directly to the central nervous system.

Used for opiate withdrawal to help with Restless Legs Syndrome, jitters, and hypertension.

This drug may cause lightheadedness, dry mouth, dizziness and constipation. Clonidine may also cause hypotension.[21]

Clonidine also has peripheral alpha agonist activity which can lead to hypertension - especially when it is injected intravenously. This blood pressure increase is sometimes witnessed in cases of overdose in children. As the clonidine is eliminated by the body, the peripheral effects wear off and its basic hypotensive effect becomes evident. Both the hypertensive and hypotensive effects can be harmful.[22]

Pediatric doses of clonidine are calculated based on the child's body weight. Clonidine dosage for ADHD in children is 5 micrograms per kilogram of body weight per day orally in four divided doses. Children who require a daily dosage of 0.2 mg usually can use the 0.3 mg dermal patch. If ADHD is associated with sleep disturbances, low to moderate doses of clonidine can be taken at bedtime. Oral doses in children with Tourette's syndrome range from 3 to 6 micrograms per kilogram of body weight per day divided into two to four even doses.[24]

Clonidine therapy should generally be gradually tapered off when discontinuing therapy to avoid rebound effects from occurring. Treatment of clonidine withdrawal hypertension depends on the severity of the condition. Reintroduction of clonidine for mild cases, alpha and beta blockers for more urgent situations. Beta blockers never should be used alone to treat clonidine withdrawal as alpha vasoconstriction would still continue.[25][26]

Since ADHD drugs like amphetamine and methylphenidate tend to stimulate the sympathetic nervous system, missed doses of clonidine while under ADHD stimulant therapy might entail increased risks of a more severe rebound hypertension. This has not been evaluated.

Clonidine is a centrally-acting α-adrenergic receptor agonist with more affinity for α2 than α1. It selectively stimulates receptors in the brain that monitor catecholamine levels in the blood. These receptors close a negative feedback loop that begins with descending sympathetic nerves from the brain that control the production of catecholamines (epinephrine, also known as adrenaline, and norepinephrine) in the adrenal medulla. By fooling the brain into believing that catecholamine levels are higher than they really are, clonidine causes the brain to reduce its signals to the adrenal medulla, which in turn lowers catecholamine production and blood levels. The result is a lowered heart rate and blood pressure, with side effects of dry mouth and fatigue. If clonidine is suddenly withdrawn the sympathetic nervous system will revert to producing high levels of epinephrine and norepinephrine, higher even than before treatment, causing rebound hypertension. Rebound hypertension can be avoided by slowly withdrawing treatment.

Clonidine's effect on reducing circulating epinephrine by a central mechanism was used in the past as an investigatory test for pheochromocytoma,[27] which is a catecholamine-synthesizing tumor, usually of the adrenal medulla. In a clonidine suppression test plasma catecholamines levels are measured before and 3 hours after a 0.3 mg oral test dose has been given to a patient. A positive test occurs if there is no decrease in plasma levels.

Clonidine, 2-(2,6-dichlorophenylamino)imidazoline, is synthesized from 2,6-dichloroaniline, the reaction of which with ammonium thiocyanate gives N-(2,6- dichlorophenyl)thiourea. Methylation of this product, followed by the subsequent reaction with ethylene diamine gives clonidine. 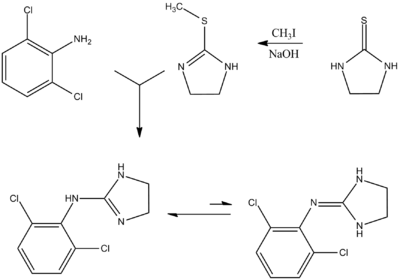