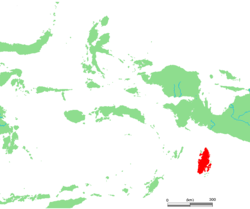 Location of the Aru Islands among surrounding islands of eastern Indonesia 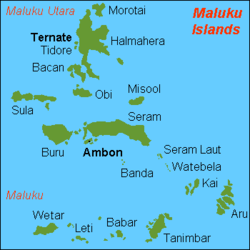 Location of the Aru Islands among the Maluku Islands

The Aru Islands (also Aroe Islands or Kepulauan Aru) are a group of about ninety-five low-lying islands in the Maluku province of eastern Indonesia. They also form a regency of Indonesia.

The islands are the easternmost in Maluku province, and are located in the Arafura Sea southwest of New Guinea and north of Australia. The total area of the islands is 8,563 km² (3,306 sq mi). The largest island is Tanahbesar (also called Wokam); Dobo, the chief port of the islands, is on Wamar, just off Tanahbesar. Other main islands are Kola, Kobroor, Maikoor, and Trangan. The main islands rise to low hills, and are separated by meandering channels. Geologically, the group is part of the Australian continent, along with New Guinea, Tanimbar, Tasmania and Timor.

Aru is covered by a mix of tropical moist broadleaf forests, savanna, and mangroves. The Islands lie on the Australia-New Guinea continental shelf, and were connected to Australia and New Guinea by land when sea levels were lower during the ice ages. The flora and fauna of Aru are part of the Australasia ecozone, and closely related to that of New Guinea. Aru is part, together with much of western New Guinea, of the Vogelkop-Aru lowland rain forests terrestrial ecoregion.

As part of the political and administrative decentralization of Indonesia since Suharto stepped down in 1998, the Aru Islands are now a separate residency (kabupaten), headquartered at Dobo, split off from the residency of Central Maluku.

Pearl farming is a major source of income for the island. The Aru pearl industry has been criticized in national media for allegedly maintaining exploitive debt structures that bind the local men who dive for pearls to outside boat owners and traders in an unequal relationship.[1]

Other export products include sago, coconuts, tobacco, mother of pearl, trepang (an edible sea cucumber, which is dried and cured), tortoiseshell, and bird of paradise plumes.

The Aru Islands have a long history as a part of extensive trading networks throughout what is now eastern Indonesia. Precolonial links were especially strong to the Banda Islands, and Bugis and Makasarese traders also visited regularly. The islands were first colonized by the Dutch beginning 1623, though initially the Dutch East India Company was one of several trading groups in the area, with limited influence over the islands' internal affairs. In 1857 the famous naturalist Alfred Russel Wallace visited the islands. His visit later made him realise, that the Aru islands must have been connected by a landbridge to mainland New Guinea during the ice age. In the nineteenth century, Dobo, Aru's largest town, temporarily became an important regional trading center, serving as a meeting point for Dutch, Makasarese, Chinese, and other traders. The period from the 1880s to 1917 saw a backlash against this outside influence, by a spiritually-based movement among local residents to rid the islands of outsiders.

The islands had an estimated population of 80,140 in 2008.[2] Most indigenous islanders are of mixed Malay and Papuan descent. Fourteen languages - Barakai, Batuley, Dobel language, Karey, Koba, Kola, Kompane, Lola, Lorang, Manombai, Mariri language, East Tarangan, West Tarangan, and Ujir - are indigenous to Aru. They belong to the Central Malayo-Polynesian languages, and are related to the other languages of Maluku, Nusa Tenggara, and Timor. Ambonese Malay is also spoken on Wamar. All are members of the Austronesian language family.

The population is mostly Christian, with a small Muslim minority, who are mainly migrants from other parts of Indonesia.