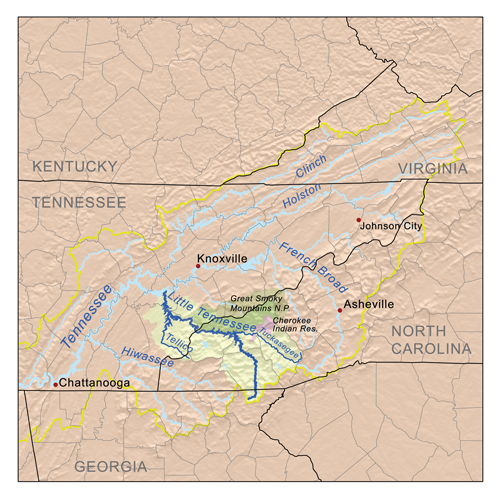 It rises in the , in the in Rabun County in northeastern Georgia. It flows north through the mountains past Dillard into southwestern . It is joined by the at Franklin, then turns northwest, flowing through the along the north side of the and past Lauada. It crosses into eastern and joins the at Lenoir City, 25 miles (40 km) southwest of Knoxville.

Calderwood and Cheoah Dams divert water through short tunnels slightly downstream of the dams themselves to hydroelectric generators. Chilhowee has power generators built straight into the dam itself. Some water is also diverted from the nearby on the to power another hydroelectric generator at the . This water is brought to the Little Tennessee River through convert|7|mi|km|0 of tunnels through the . Chilhowee, Calderwood, and Cheoah Dams and the Santeetlah Powerhouse were originally built by to power the plant at . To ensure efficiency in operation, Alcoa coordinates the operation of its hydro system with TVA, making sure that reservoir and river water levels are safe for recreational use (primarily boating and fishing) and that proper flows of water continue down the river.

The final impoundment is , which is just above its mouth into the Tennessee River at . It creates . The dam does not have its own hydroelectric generators but serves to increase the flow through those at nearby on the Tennessee by means of a which diverts much of the flow of the Little Tennessee. The plan to build the dam was the subject of environmental controversy during the 1970s regarding the , an . [Richard Polhemus, "The Toqua Site &mdash; 40MR6", Vol. I (Norris, Tenn.: Tennessee Valley Authority, 1987), 1.] It was the first major legal challenge to the .Fact|date=January 2008

The Little Tennessee River and its immediate watershed comprise one of the richest archaeological areas in the southeastern United States, containing substantial habitation sites dating back to as early as 7,500 B.C. [Jefferson Chapman, "Tellico Archaeology: 12,000 Years of Native American History" (Norris, Tenn.: Tennessee Valley Authority, 1985), 41.] Cyrus Thomas, who conducted a mound survey in the area for the in the 1880s, wrote that the Little Tennessee River was "undoubtedly the most interesting archaeological section in the entire Appalachian district." [Chapman, "Tellico Archaeology", 16.]

Substantial Archaic period (8000-1000 B.C.) sites along the river include the Icehouse Bottom site and the Rose Island site, both located near the river's confluence with the . [Jay Franklin, " [http://tennesseeencyclopedia.net/imagegallery.php?EntryID=A030 Archaic Period] ." "The Tennessee Encyclopedia of History and Culture", 2002. Retrieved: 26 January 2008.] These sites were probably semi-permanent base camps, the inhabitants of which may have sought the deposits on the bluffs above the river which they used to create tools. [Chapman, "Tellico Archaeology", 40-41.]

Evidence of (1000 B.C. - 1000 A.D.) habitation has been uncovered at numerous sites along the Little Tennessee, most notably at Icehouse Bottom, Rose Island, Calloway Island (near the river's confluence with Toqua Creek), Thirty Acre Island (near the river's confluence with Nine Mile Creek) and Bacon Bend (between Toqua and Citico Beach). Excavations in the 1970s uncovered large Woodland-period burials on Rose Island and Calloway Island. [Chapman, "Tellico Archaeology", 63-67.] Pottery fragments uncovered at Icehouse Bottom in the 1970s show evidence of interaction with the Hopewell people of what is now Ohio. [James Stoltman, " [http://mcclungmuseum.utk.edu/research/renotes/rn-17txt.htm Icehouse Bottom and the Hopewell Connection] ." "Frank H. McClung Museum Research Notes", February of 1999. Retrieved: 27 January 2008.]

Mississippian period (c. 1000-1500 A.D.) sites in the Little Tennessee Valley include the Toqua site (at the river's confluence with Toqua Creek), (adjacent to Toqua), Citico (at the river's Citico Creek confluence), and Bussell Island (at the mouth of the river). [Polhemus, "The Toqua Site &mdash; 40MR6" Vol. II, 1240-1246.] Toqua's Mississippian inhabitants constructed a convert|25|ft|m|sing=on platform mound overlooking a central plaza. By 1400, the village covered convert|4.8|acre|km2 surrounded by a clay-covered palisade. [Chapman, "Tellico Archaeology", 79.]

Several Middle towns, including , Jore, and Cowee were located along the river's North Carolina section. [William Steele, "The Cherokee Crown of Tannassy" (Winston-Salem: John F. Blair, 1977), map on inside cover.] The river was also home to most of the major towns, the most prominent of which included Chota, , Toqua, Tomotley, (near Rose Island), Chilhowee (at the river's Abrams Creek confluence), Tallassee (near modern Calderwood), Citico, and Tuskegee (adjacent to Fort Loudoun). [Chapman, "Tellico Archaeology", 100.]

Euro-American traders were visiting the Overhill towns along the Little Tennessee by the late 1600s, and there is some evidence that Hernando De Soto and Juan Pardo passed through the Little Tennessee Valley in 1540 and 1567, respectively. [Chapman, "Tellico Archaeology", 97.] Fort Loudoun, a fort built by the English in 1756, was located at the river's confluence with the Tellico River and has been reconstructed. Two early American sites are located along the Little Tennessee&mdash; the , an outpost at the river's Nine Mile Creek confluence, and Morganton, a river port and town near modern Greenback that thrived in the early 1800s. [Alberta and Carson Brewer, "Valley So Wild" (Knoxville: East Tennessee Historical Society, 1975), 94-97.] The Hazel Creek section of the Great Smoky Mountains National Park, located on the north shore of the river's Fontana Lake impoundment, was home to a substantial community in the late 1800s and early 1900s. [Duane Oliver, "Hazel Creek From Then Till Now" (Maryville, Tenn.: Stinnett Printing, 1989), 1-2.]