Vargas State (Spanish: Estado Vargas, IPA: [esˈtaðo ˈβarɣas]) is one of the 23 states of Venezuela. Named after Venezuela's first non-military president, José María Vargas, Vargas comprises a coastal region in the north of Venezuela, bordering Aragua to the west, Miranda to the east, the Caribbean Sea to the north and the Capital District to the south. It is home to both the country's largest seaport and airport. The state capital is La Guaira.

In 1999, the geographic center of Vargas state suffered major floods and landslides, known as La Tragedia de Vargas (the Vargas Tragedy), causing major losses of life and property, and resulting in forced population movements including the virtual disappearance of some small towns. Thousands died, and many more fled the area to other states.

A section of the Vargas state after the 1999 Tragedy - notice the scars in the mountains due to the mudslides.

This region of Venezuela has undergone important changes over the years, and while the geographical borders have remained, the territorial delineation has varied. The area was previously one of the departments of the Venezuela's Federal District (the other being the Libertador department, now Libertador Municipality), and the governor of this region was chosen by the national government. The area later evolved into a municipality, but was still dependent on the governor of the Federal District. In the 1990s there were increased calls for Vargas to become a separate entity, distinct from Caracas. In 1998 the government of Rafael Caldera decreed Vargas as an independent municipality, separate from the Federal District, with the statute of Federal Territory. Shortly after it became the 23rd state of Venezuela.

In mid-December 1999, after several days of ever-increasing rains pouring over the Central Mountain Range and the piedmont within the span of 24 hours along the coastline for about 45 km., the state suffered from massive floods which resulted in severe losses of life and property. In its wake as of December 16, the surviving population witnessed the massive destruction of most of the state infrastructure, including the collapse of most roads, bridges, housings, public and private buildings, and of basic services as electricity and communications; in which thousands were killed or missing. Official estimates some 50,000 dead or missing, but the real figure may be much higher. In the following weeks nearly the entire state's population was displaced. Locals refer to the Dec. 1999 disaster as "La Tragedia de Vargas" (the Vargas' Tragedy). Such climatic phenomenon (of extraordinarily high rainfall levels) appears to be periodical, having a cycle of about 70 years, and probably has occurred hundreds, perhaps thousands of times since a distant past.

The geology of the state corresponds with the Coast Mountain range. It has as geologic limit, the fault of La Victoria, where the rocks of the Gran Caracas group arise, on the igneous-Metamorphico plinth of the Sebastopol Complex of the inferior Paleozoic. Also they are located the formation: Peña de Mora of the Mesozoic, the Migmático Complex of Todasana of the superior Cretaceous, the formation of Las Pailas del plioceno tardío, and the Abisina formation composed by sea sediments.

It is formed by one narrow coastal area on the Caribbean Sea, of about 160 km of length, that falls steeply to the sea. It compares to this line rises the mountainous area of the Coast, that reaches heights superior to the 2000 ms, being the hills, Agustín Codazzi (2 425m.s.n.m), and Naiguatá (2 765 m.s.n.m) as well as the Row of Avila. 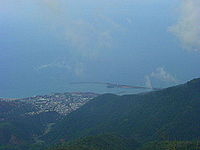 The climate is classified as tropical and warm. The annual average temperature oscillates between 25,6º and 27º Celsius. According to the climatic classification of Koeppen, the climate is of steppe characterized by dryness, because the evaporation surpasses precipitations. Annual precipitation varies from 1530 to 900 mm. 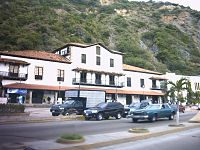 In 1825, La Guaira conforms the Province of Caracas. In 1850, Maiquetía is created. In 1864, La Guaira and Maiquetía form a District. In 1872 is created the Federal District and in 1904 is divided in two parts, one of them of the Vargas Department. In 1986 Vargas is declared independent municipality, but part of the Federal District. In 1998 the state is created. At the moment it divides in one municipality and eleven parishes.

The main economic activity of the state has turned around the Harbor and the Airport. Additionally to these primary activities, before the 1999 Tragedy, the state had an intense local and foreign visitor activity, with growing investment in residential areas, social clubs, Hotels, Restaurants and other facilities.

La Guaira Harbor: is the second port of Venezuela, in order of traffic and payload volumes, and constitutes the front door of consumer goods, destined to the metropolitan area of Caracas and the states: Vargas, Miranda and Aragua.

Simon Bolivar International Airport, Maiquetia: is located in Maiquetía, Venezuela, about 13 miles from Downtown Caracas, the capital of Venezuela. Simply called 'Maiquetia' by the local population, this is the most important airport of the twelve international airports in Venezuela, it handles flights to & from many important cities in the Americas, the Caribbean and Europe. 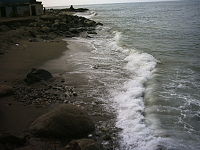 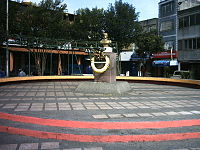 The Afro-Venezuelan music is the representation par excellence of all this region, the main folkloric celebrations where the drums and the joy of the population present, are:

Vargas Coast and its beaches 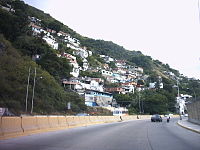 From the heights of El Ávila we can contemplate the winding coastline of the Caribbean fringed by royal palm trees. A few kilometres out of Caracas are the extensive beaches of the central coastline: Playa Grande, Catia La Mar, Macuto, Caraballeda, El Palmar, Naiguatá and Anare, however a walk around the central coast must begin at La Guaira, which since its foundation has been the port of Caracas.

La Guaira, together with its varied maritime and commercial activities has preserved the atmosphere of the colonial period. The forts of El Vigía and La Pólvora remind us the time when the city had to defense itself against the attacks of pirates and buccaneers. It could be said that history always came to La Guaira, for better or for worse, via the sea. The wealth that reached it through its port also attracted pirates who devastated it, sacking the town on many occasions.

Among the remains of the colonial period, La Guaira has preserved the following noteworthy monuments: Guipuzcoana house, Bolívar street, the San Carlos fort, the Guamacho and Muchinga gangways, the Pasaje Urrutia, and the Puente Jesús.

This state and its capital, are land of sailors, where the women tell of loneliness and where the men tell of sea-fairing and storms.

Reference: The coast and its beaches, by Maurice Wiesenthal, article appeared in the book Caracas, published in 1981.