The state is the smallest one in area, and is located off the northeast Caribbean coast of Venezuela. It is the only insular state of Venuezuela. Its name comes from the heroism shown by its inhabitants during the Venezuelan War of Independence, deemed similar to that of the Spartan soldiers of Ancient Greece. The main island of Margarita alone has an area of 934 km². In 1909 the state was constituted and in 1947 the island of Cubagua was added. Its capital city is La Asunción, but the main urban center is Porlamar. Other important towns are Juan Griego, Pampatar (home of the Port Authority), Punta de Piedras, San Juan Bautista, Las Guevaras, Las Hernández, Villa Rosa, Bella Vista (Margarita), El Valle del Espíritu Santo.

Nueva Esparta was also the name of a Destroyer Class, it was the leader of 1st Destroyer Division, a British built for Venezuela naval forces in the 50's.

Founded in 1525, the Province of Margarita was the oldest of those that in 1777 formed the Post of Captain-General of Venezuela. It was dependent on the Royal Audience of Santo Domingo until 1739, when it was annexed to the Viceroyalty of New Granada (Virreinato de Nueva Granada). In 1821, when the Greater Colombia was created, the Province of Margarita was integrated to the Orinoco Department, along with other regions. When the Republic of Venezuela arose in 1830, it was one of its 13 original provinces. In 1864, when the country was divided into 20 states and a Federal District, Margarita took the name of State of New Sparta. In 1881 its status was changed to be a mere section of the Greater Guzmán Blanco State (Called Miranda from 1889 to 1898). In 1901, two years after the autonomy of the states was restituted, it retook the name of New Sparta, but again lost it between 1904 and 1909, period in which it was included in the Federal District as "Eastern Section". Finally, in 1909 it recovered the condition of a State, and in 1948 it annexed the island of Cubagua territory. 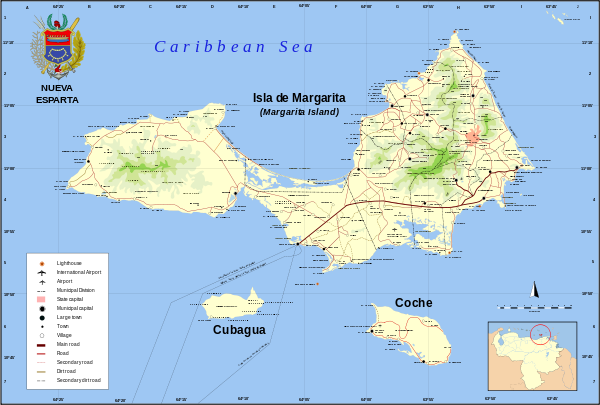