Cojedes State (Spanish: Estado Cojedes, IPA: [esˈtaðo koˈxeðes]) is one of the 23 states of Venezuela. The state capital is San Carlos. 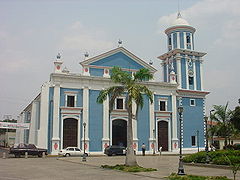 Native Americans from the Orinoco region kept moving through this region to colonize or trade with the regions around the Tacarigua Lake.

Fray Cirilo Bautista of Sevilla founded Santa Clara de Caramacate in 1750. Bishop Martí wrote some of the first reports about the area in 1760. That year missionaries Fray Gabriel de San Lucas and Fray Salvador of Cádiz the city of San Carlos. The original name was San Carlos de Austria. Nuestra Señora de la Chiquinquirá of El Tinaco was founded by Fray Pablo de Orichuela on the same year. El Pao was founded one year later, in 1661. The towns and the areas around them became cantons under jurisdiction of the Provincia de Caracas.

After the independence, the territory became part of Carabobo, one of the 11 first Venezuelan provinces. 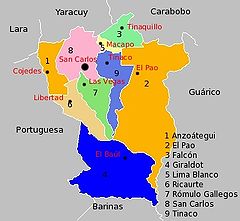