Odilo Lotario Globocnik[2] (21 April 1904 – 31 May 1945) was a prominent Austrian Nazi and later an SS leader. He was an acquaintance of Adolf Eichmann, who played a major role in the extermination of Jews and others during the Holocaust.[3][4] Globocnik was the lead administrator of Operation Reinhard.

Odilo Globocnik was born on 21 April 1904 into a family of Slovene descent in the Imperial Free City of Trieste, in what was then the capital of the Austrian Littoral administrative region of the Austro-Hungarian Empire (now in Italy). He was the second child of Franz Globocnik from the Upper Carniolan town of Neumarktl (now Tržič in Slovenia) who served as a Habsburg cavalry lieutenant in the Austro-Hungarian army. His father was unable to accumulate the money to apply to resign from the army, so was instead given a job in the reserves as a postman. In 1914, the family left Trieste for Cseklész where Franz Globocnik was recalled to active duty with the outbreak of World War I.[5]

The same year, Odilo Globocnik joined the army via a military school. The war ended his military education prematurely. Odilo and his family moved to Klagenfurt. Globocnik enrolled in a civilian high school, leaving 1923 without obtaining a certificate.[6] He performed jobs such as carrying suitcases at the train station in order to help support the family financially.

Globocnik first appeared in politics in 1922, when he became a prominent member of the pre-Nazi Carinthian paramilitary organizations and was seen wearing a swastika. At this time he was a building tradesman. He was introduced to this when he was engaged to Grete Michner. Her father, Emil Michner, talked to the director of KÄEWAG, which was a hydropower plant, and secured Globocnik a job as a technician and construction supervisor.[7] 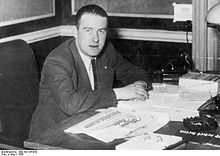 In August 1933, Globocnik was arrested for the first time, for attempting to contact imprisoned Nazis in Klagenfurt. This was also the same year that he became a member of the Austrian SS. He was arrested because of his public support for the National Socialist German Workers' Party (NSDAP, commonly known as the Nazi Party), as he had become a member of the Nazi party three years earlier, in 1930 while in Carinthia. Although he was arrested four times between 1933 and 1935, he spent little over a year in jail.[8] This was due to Heinrich Himmler’s intervention, after two years of arguments between Globocnik and the authorities.

His first documented activity for the NSDAP occurred in 1931, when his name appeared in documents relating to the spreading of propaganda for the party. By this point he had more or less abandoned his career as a building tradesman, and attached himself very closely to the NSDAP. One of his tasks for the NSDAP was to construct a courier and intelligence service, which channeled funds from the German Reich into Austria. Globocnik was inducted into the SS on September 1, 1934 with the number 292,776.

In June 1933, in Vienna, a bomb was thrown at the shop of Jewish jeweler Norbert Futterweit, killing him. This was one of the first murders in Austria attributable to the Nazis, and a number of historians believe that Globocnik was involved in the attack.[9]

His fanatical devotion to the Nazi cause paid off for Globocnik, as he quickly climbed the ladder of the party apparatus in his native Austria. He became a Deputy Gauleiter for the whole of the country in 1933 at the age of 29, and was a key player in the usurpation of the Austrian government by the National Socialists.[10] Globocnik was rewarded for his diligence, being appointed Gauleiter of Vienna on May 24, 1938 by Adolf Hitler.[11]

In his early tenure as Gauleiter, Globocnik espoused Nazi anti-Jewish philosophy: "I will not recoil from radical interventions for the solution of Jewish questions." Later that same year he opened Vienna's first anti-Semitic political exhibition, which was attended by 10,000 visitors on the first day. Prominent at the exhibition and received enthusiastically by the public was the film, "The Eternal Jew".[12]

As corrupt as he was fanatical, Gauleiter Globocnik was relieved of his post and stripped of his party honours in 1939 when it was discovered he was involved in illegal foreign currency speculations. Himmler transferred Globocnik to the Waffen SS in the rank of corporal as punishment, where he served with SS Standarte Germania during the Polish campaign.[13]

Himmler liked Globocnik and recognized the value of the ruthless Austrian. In late 1939 Globocnik was pardoned, promoted to SS-Brigadeführer, and assigned to Lublin province.[14] 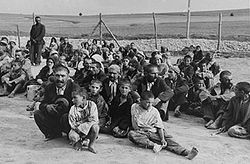 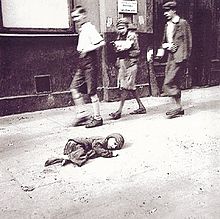 A child dying in the streets of the Warsaw Ghetto

On November 9, 1939, Himmler appointed Globocnik SS and Police Leader in the Lublin district of the General Government. After a disappointing party career, Globocnik now had a second chance in the ranks of the SS and the police.[15]

In the years that followed Globocnik was responsible for:

On October 13, 1941, Globocnik received a verbal order from Himmler to start immediate construction work on Belzec extermination camp, the first labor camp in the General Government.[18][19] Before, Belzec had been part of Himmler's and Globocnik's Burggraben project. The construction of three more camps, Sobibor and Maidanek in the Lublin district, and Treblinka at Małkinia Górna, followed in 1942. Globocnik was complicit in the extermination of more than 1.5 million Polish, Czech, Dutch, French, Russian, Slovak, German, and Austrian Jews and non-Jews in the death camps which he organized and supervised.

He exploited Jews and non-Jews as slave labourers in his own forced labour camps, and was responsible for seizing the properties and valuables of murdered inmates while in charge of Operation Reinhard. Although other arms of the Nazi state were also involved in the overall management of the greater concentration camp system, Globocnik had control over the Aktion Reinhard camps, and any orders that he received came directly from Himmler.[20] Since 1942–1943 he also oversaw the beginning of the Generalplan Ost, the plan to expel Poles from their lands and resettle those territories with German settlers (see Zamość Uprising).

Following Italian leader Benito Mussolini's downfall and having looted some of the stolen assets from the labor camps, Globocnik was transferred from the General Government of occupied Poland to the Julian March in the German-occupied portion of Italy in September 1943 and was stationed in his hometown of Trieste. He was appointed Higher SS and Police Leader of the Operation Zone of the Adriatic Littoral, as well as command of the Risiera di San Sabba concentration camp in Trieste.[21] Globocnik took with him a number of his staff from Operation Reinhard, including Christian Wirth, Franz Stangl and Franz Reichleitner.

His main task there was combating Yugoslav partisans, but again, he played a leading role in the persecution of Italian Jews. With the advance of Allied troops, Globocnik retreated into Austrian Carinthia and finally went into hiding high in the mountains in an alpine hut near Weissensee, still in company of his closest staff members.

Globocnik was tracked down and captured by a British commando unit, the 4th Queen's Own Hussars, at the Möslacher Alm, overlooking the Weissensee on May 31, 1945. The British unit, under the command of a Major Ramsey from SIS (MI6), had been tracking potential war criminals in Austria. Globocnik was taken to Paternion to be interrogated, and around 11.30 hours committed suicide in by biting on a cyanide capsule. At least two contemporary photographs show Globocnik's body shortly after his death, and there are several reliable reports, including the Regimental Diary and Field Reports of the 4th Queen's Own Hussars, detailing the circumstances of his capture and suicide. His body was taken to be buried in a local churchyard, but the priest reportedly refused to have 'the body of such a man' resting in consecrated ground. A grave was dug outside the churchyard, next to an outer wall, and the body was laid to rest without ceremony.[22]

Other sources put his death in either early May or June 1945 at the hands of either partisans or a Jewish revenge squad.

A false version of Globocnik's fate has circulated indicating that he was turned over to U.S. intelligence by the British. This is based on an "official US document signed by US CIC S/A Operations Officer Andrew L. Venters, dated 27 October 1948, more than three years AFTER his supposed death". However this document was exposed as a forgery in the 1980s by the investigative writer and historian, Gitta Sereny; she gives all details in a long article in the Observer newspaper ("Spin Time For Hitler", London, April 21, 1996).

Globocnik features as a major character in the alternate history Fatherland by Robert Harris. In the novel, which revolves around the notion that Germany had been victorious in World War II, Globocnik (commonly referred to by his nickname "Globus") has risen to become a feared leader within the Gestapo. Globocnik is the main villain in the story.

There is also a minor character in Harry Turtledove's novel In the Presence of Mine Enemies with the name Odilo Globocnik. However, the chronology of the story, set around the year 2010 in an alternate history of Nazi Germany, shows that this character cannot be the same person as the real-world Globocnik. Turtledove's character is described as being in his fifties, and thus would have been born sometime in the 1950s. The historical Globocnik, born in 1904, would have been over one hundred years old at the time in which the novel is set. It is unknown whether the Globocnik described in the novel is related to the real Globocnik.

Globocnik appears as an affable yet threatening and suspicious bureaucrat in Jonathan Littell's novel The Kindly Ones.