The Municipal District of Peace No. 135 is a municipal district in northwestern Alberta, Canada.

It is located in Census Division 19. The municipal seat is set in the Village of Berwyn.

The following communities are located in this municipal district:[3] 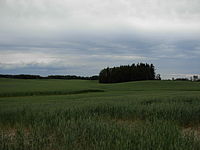 Grain fields in the Peace Country.

Agriculture is a significant part of the area's economy, with the region being dubbed as most northern agricultural industry oasis in the world.[4] The region has unique growing combination of a northern climate, fertile soils, and a watershed system fed by glacial run offs.