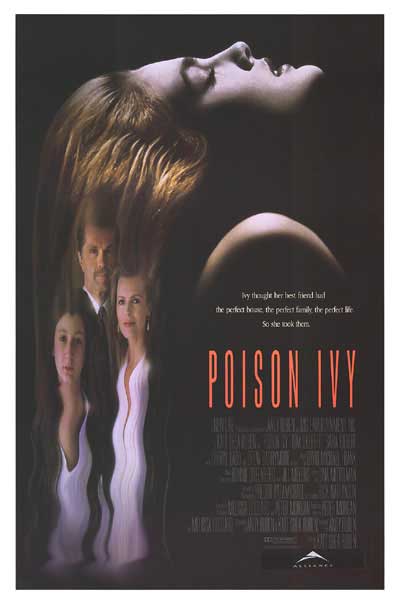 "Poison Ivy" is a 1992 thriller and directed by . (who also produced the film) transformed 's story into the . It stars , , and . The original music score is composed by . This film was shot in .

It was nominated for the Grand Jury prize of Best Film at the . Sara Gilbert was nominated for Best Supporting Female at the . Although it did not fare very well at the with its limited theatrical release, the film received favourable word-of-mouth, and became a success on cable and in the mid 1990s. The film has spawned several sequels and is marketed with the tagline "What Ivy wants, Ivy gets." The most recent sequel, "Poison Ivy 4: The Secret Society" is scheduled for release in Summer 2008.

Set in , this film follows the lives of a wealthy but dysfunctional American family. Sylvie Cooper () is a misanthropic student at a private high school for the privileged. She befriends "Ivy" (), a poor but intelligent and seductive girl attending the school on a scholarship. Sylvie thinks Ivy is sweet but very different and they became best friends after wandering home one school day. Ivy's actual name is unknown, as Sylvie based it on a tattoo on Ivy's leg that depicts a crucifix covered with . Clearly, Ivy becomes seduced by Sylvie's wealthy and privileged home life and sets out to derail her family one by one. Ivy, naturally, steals the affections of Sylvie’s mother Georgie (), to gain her trust. Georgie is convinced she is dying, and constantly spends her time cooped up in her bedroom. It is Ivy who tells her that life is better lived.

It is then implied that Ivy has moved out of her disruptive home life and moved in with Sylvie. Before an important party, Ivy receives a call for Sylvie over tutoring kids to read, a project that she is involved with at school. Ivy, knowing it’s her father, Darryl's () party, schedules the reading project for that exact day. This causes tension between daughter and father. During the party, Ivy openly flirts with Darryl — wearing Georgie's red sequined dress. While in the kitchen after the party, Ivy is caught by Darryl dancing seductively, and Ivy and Darryl fall into a passionate embrace. They are then caught by Georgie, and Ivy dismisses it as a sympathy hug for Darryl, who was upset. Ivy then takes Georgie upstairs and gives her the medication. Georgie then falls asleep, and Ivy fellates Darryl in front of an unconscious Georgie. After this, Darryl and Ivy begin an intense love affair. While driving Ivy home in the rain, Darryl and Ivy have sex on the top of Darryl's for the very first time in the rain. After a few weeks, Ivy finds Georgie attempting suicide on the edge of a balcony in her bedroom. Ivy, knowing Georgie has been contemplating suicide for weeks, pushes Georgie off the edge, killing her. After her funeral, it is implied that Ivy and Sylvie have a relationship bordering on lesbianism.

In the weeks that follow, Ivy and Sylvie go for a ride in her mother's old . Ivy begins humming a tune that sounds eerily similar to the music that was playing in Georgie's room the day she allegedly committed suicide. Sylvie then naturally questions over whether or not she was there and what she said. To avoid the potentially threatening conversation, Ivy crashes the car, causing Sylvie to be knocked unconscious. Ivy then places Sylvie in the driver’s seat to indicate to Darryl that Sylvie was driving without a license. When it becomes clear what Ivy has done, Sylvie is in the hospital. She escapes, fearing Ivy may have gotten to Darryl. Upon returning home, Sylvie finds Ivy and Darryl in the throes of love-making. Darryl chases after Sylvie to stop her from running away, yet slips. Ivy then follows Sylvie and asks her to be a "whole new family". Sylvie and Ivy struggle on the edge of the balcony where Ivy pushed her mother, and Sylvie pushes Ivy over the balcony. Ivy is hanging onto Sylvie by her necklace which breaks, causing Ivy to fall to her death just as her father drives back, coming to a stop before her broken body.