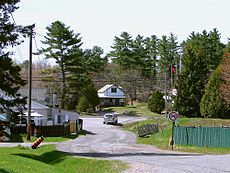 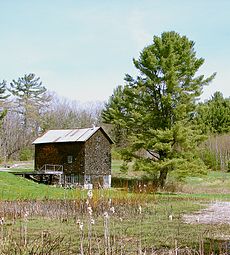 Nobel is a village located on the shores of Parry Sound, Ontario, Canada. It is located in the Municipality of McDougall in the District of Parry Sound. The community is named after Alfred Nobel, the inventor of dynamite.

Nobel was the home, in World War I, of two explosives factories: The British Cordite Limited and Canadian Explosives Ltd. Both sites closed in 1922. Explosives and munitions were also produced at Nobel in World War II.

Nobel is of historical interest to Canadians because it was home of the Orenda Engines testing facility, where the Orenda Iroquois gas turbine engine was being developed. This engine was slated to power the ill-fated Avro Arrow until the project was cancelled by the Diefenbaker government.

In 2010, a stretch of the new highway 400 alignment opened up which now bypasses Nobel. Some businesses in the town were already affected by the new highway due to a sharp decline in traffic, a lack of customers and had to closed down. The former route of highway 69 through the town will be renamed as Nobel Drive and reduced in width from four to two lanes, with the decommissioned lanes to be converted into a recreational trail. [2] [3] [4]