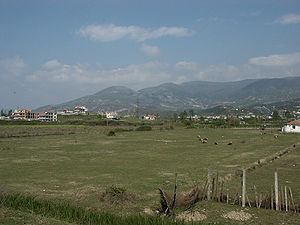 A coastal plain is an area of flat, low-lying land adjacent to a seacoast and separated from the interior by other features. One of the world's longest coastal plains is located in eastern South America. The southwestern coastal plain of North America is notable for its species diversity. The Gulf Coastal Plain of North America extends northwards from the Gulf of Mexico along the Lower Mississippi River to the Ohio River, which is a distance of about 500 miles (about 800 km). During the Cretaceous age, the central area of the United States was covereperornis]] and Ichthyornis, found in western Kansas, indicate that the shallow sea was rife with fish. The coastal plain lying alongside the lower Mississippi River may be associated with a shallow sea which had existed 7 thousand years ago. Coastal plains are low lands.