Clécy is a French Commune in the Calvados department in the Basse-Normandie region in northwestern France.

In 1932 it was awarded the title The Capital of Swiss Normandy by the Tourism Minister Monsieur Gourdeau.

Clécy is on the River Orne, in the middle of Swiss Normandy, about 35 kilometres (22 mi)s south of Caen. Covering 2,463 hectares (6,090 acres) it is the largest communne in the canton of Thury-Harcourt.

Called the "Capital of Swiss Normandy", this village owes its fame to the rugged and verdant Armorican massif, with valleys through which the Orne flows.

The name "Clécy" is mentioned in 860 in the reign of Charles the Bald.

When French cantons were created, Clécy was the capital of the canton. This ceased to be the case after restructuring in 1801.

Clécy has a wealth of historical treastures: Châteaux and manor houses are spread all over Clécy and its surroundings. The Château de la Landelle is one of the oldest.

More recently, painters such as Pissaro, Moteley and Hardy have painted landscapes around Clécy. 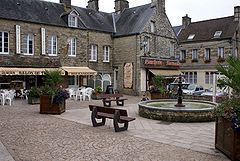