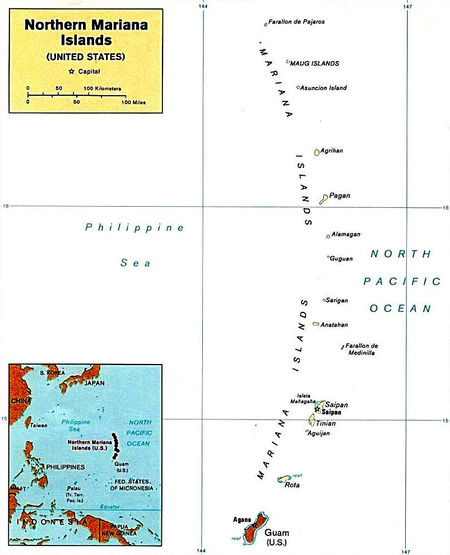 Northern Islands Municipality is one of the four main political divisions of the Commonwealth of the Northern Mariana Islands. It consists of a long string of the northernmost islands of the Northern Marianas, including (from north to south) Farallon de Pajaros, the Maug Islands, Asuncion, Agrihan, Pagan, Alamagan, Guguan, Zealandia Bank, Sarigan, Anatahan, and Farallon de Medinilla. The total land area of the islands, including offshore islets and rocks, is 154.755 km² (59.75 sq mi).

As of April 1, 2000, the 2000 census reported a municipality-wide population of only 6 persons (all on the island of Alamagan), but Pagan and Agrihan are also known to have seasonal populations. Many Northern Island inhabitants have secondary residences on Saipan due to economic, educational or other needs. Some islands had also been evacuated due to volcanic activities such as in the case of Anatahan (2003) and Pagan (early 1980s, since reinhabited).

The mayor's office and municipality administration, traditionally in the village of Shomushon on Pagan, is now "in exile" on Saipan. There are more than 100 registered voters in the municipality. [1] For the NMI House of Representatives, Northern Islands voters are grouped with one of the Saipan districts.

Most of the Northern Islands can only be reached by boat, except for an airstrip that serves Pagan. There are no electricity or telephone systems, and residents rely on generators for electricity and radio for communications.

Agriculture and fishing are essentially the only economic activities, although on Pagan pozzolan-mining became a small industry after the early-1980s volcanic eruptions.

Official site of the Northern Islands