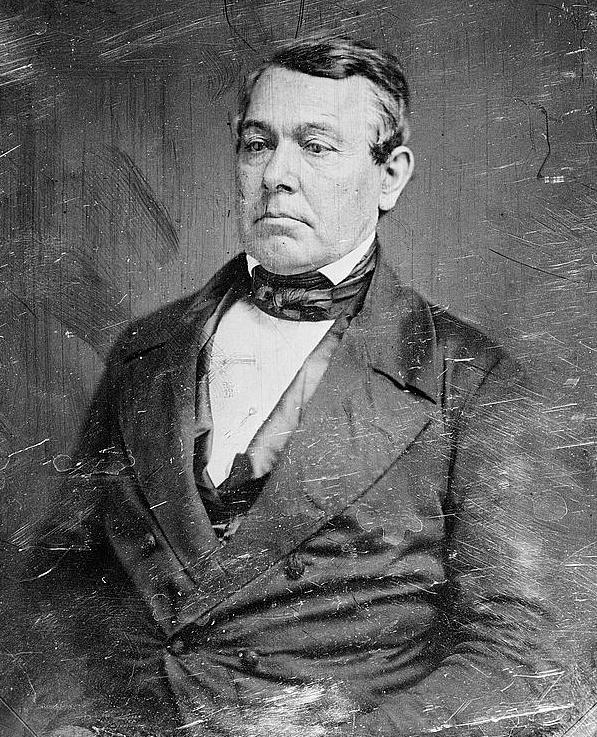 Thomas Corwin, also known as Tom Corwin and The Wagon Boy (, ndash , ) was a politician from the state of who served as a , a member of the , , and , and as and Secretary of the Treasury.

Corwin, whose brother and nephew were also U.S. Representatives, was born in , and moved with his parents to , in 1798. During the , he served as a wagon boy in General 's Army.

He studied law, and was admitted to the bar in 1817, commencing practice in Lebanon; he was prosecuting attorney of Warren County from 1818 to 1828.

In 1822-1823 and 1829, he was a member of the Ohio House of Representatives, where he made a spirited speech against the introduction of the whipping post into Ohio.

Thomas Corwin, as quoted by Canadian humorist Stephen Leacock --cquote|The world has a contempt for the man who amuses it. You must be solemn, solemn as an ass. All the great monuments on earth have been erected over the graves of solemn asses.

He resigned from the Senate to become President 's Secretary of the Treasury shortly after the death of President . Like his immediate predecessor, , Corwin believed in a protective tariff, but he did not want to make sudden or drastic changes in the free-trade tariff law of 1846. He objected to that law's provisions, which taxed some imported raw materials at a higher rate than the imported manufactured goods made from those materials, stating in a report to Congress that "such provisions certainly take from the manufacturer and artisan that encouragement which the present law was intended to afford." As a longtime Whig, however, Corwin was unsuccessful in passing any tariff legislation in a Congress controlled by Democrats. He retired as Secretary at the end of Filmore's administration.

He was again elected to the House of Representatives in 1858, and returned to that body as a Republican and served from to .

He resigned only a few days into the 37th Congress after being appointed by the newly inaugurated President to become Minister to Mexico, where he served until 1864. Corwin, well-regarded among the Mexican public for his opposition to the while in the Senate, helped keep relations with the Mexicans friendly throughout the course of the Civil War, despite Confederate efforts to sway their allegiances.

After resigning from his post as Minister, he settled in , and practiced law until his death at age 71. His interment was in Lebanon Cemetery, .

Thomas Corwin is perhaps best known for his successful sponsorship during the 36th Congress in early 1861 of the proposed to the which remains to this day technically still pending for ratification before the state legislatures. That amendment would have prohibited any amendments to the Constitution from interfering with slavery in the United States. When it was approved by Congress and sent out to the state legislatures for consideration, it was a last-ditch effort to avert the outbreak of the Civil War.