Club Universidad Nacional was originally an amateur club affiliated with UNAM, although the relationship with the university no longer exists. Since its founding, the UNAMitas have evolved into one of the most popular Mexican teams and have gained an international following.

The team's blue and gold colors were selected as a tribute to the University of Notre Dame, whose football coaches helped to develop an American-style football team at the university. The nickname was inspired by Roberto 'Tapatio' Mendez, who coached the team from 1946–1964 and whose motivational speeches often compared his players to pumas. The nickname stuck with the public, and ever since all the athletes representing the University have been called Pumas.

Their home ground is the Estadio Olímpico Universitario, which was the setting for the 1968 Summer Olympics. It has a capacity for 62,700 fans and is within the University, allowing it to be very close to its main supporters, the students. The Pumas also have training facilities within the University but their main complex is the Cantera, located near the University.

In the first decades of the 20th century, the most popular sport among the UNAM student body was American football[citation needed], although association football (soccer) was becoming a stronger presence on campus. In 1927, the dean of the University, Luis Chico Goerne, made the first attempt to affiliate a representative of UNAM to the top football Mexican championship of the day, by filing a petition to join the Liga Mayor de Fútbol Professional del Distrito Federal. The petition was rejected in favor of Club Marte de Morelos.

By the 1940s, the dean Gustavo Baz Prada assigned the task to prepare the UNAM representative to Rodolfo "Butch" Muñoz, then player of Club España. The new manager formed its new team with members of the student body of the many schools and faculties of the university. The UNAM representative joined many university tournaments, with successful results, and "Butch" Muñoz went on to manage the team for 13 years. This prepared the team to complete their later transition to professional status.

In August 1954, the Club Universidad was accepted as a member of the Segunda División, in those days the second tier division of professional football in Mexico. This achievement was accomplished with the support of the dean Nabor Carrillo and Guillermo Aguilar Alvarez Sr., a benefactor of the club. Aguilar Alvarez was appointed by the dean as the chairman of the club.

On September 12, 1954 UNAM played its first professional game, an away match against CF Monterrey. The transition was not easy after only three years; Club Universidad requested a special permit to leave the Segunda División for a year while they underwent a rebuilding process. The process was completed within the year, Hector Ortiz was appointed as the new manager of the club, and a Board of Patrons was formed.

After eight years in the Segunda División, UNAM finally achieved its objective and won promotion to the Primera División. Club Universidad won the promotion on January 9, 1962 by defeating Club Cataluña de Torreón by a score of 5–1 in Ciudad Universitaria. At the end of the game the celebration was moved from the stands to the pitch when the fans invaded the field to congratulate their heroes, and carried the players on the shoulders. this was the first step towards the consolidation of the club.

Once the team had established itself in the first division, the Board of Patrons took one of the most important decisions in the history of the club, deciding to create a modern youth system to develop new generations of players.

After two years under the management of Alfonso 'El Pescado' Portugal, the Spaniard Ángel Zubieta took the reins of the team. In doing so, he opened the door to foreign reinforcements, but he also gave continuity to the tradition of the club of employing players that had been trained in its youth system.

The first half of the decade was marked by the arrival of three of the most important foreign players in the history of the club; the Peruvian Juan José Muñante, the Serbian Velibor "Bora" Milutinović, and Evanivaldo Castro "Cabinho". They arrived to join a solid base of Mexican players such as Miguel Mejía Barón, Héctor Sanabria, Arturo Vázquez Ayala, José Luis "Pareja" López, and Leonardo Cuellar. In the second half of the decade those same players would give the club its first titles in the top division.

In 1975 the club adopted a new administration consisting of an independent civil association that helped the University to support the club. In the 74–75 season, Universidad won the Copa México and the Campeón de Campeones. In the 76–77 season, Club Universidad became league champion for the first time in its history. That championship was followed by two sub championships. The culmination of a successful decade for Club Universidad came with the debut of Hugo Sánchez.

In the 1980–81 season, Universidad won its second league championship. That season was also the last season Hugo Sánchez played for the club. In the following season, the Pumas won the CONCACAF Championship and the Interamerican Cup.

This decade also marked the national recognition of the work performed by the club, and the revolutionary and dynamic style of play that helped Mexican football overall. For the 1986 FIFA World Cup, the Mexican Football Federation appointed the manager of Universidad, "Bora" Milutinović as the manager of the Mexico national football team. Milutinović called numerous Pumas and former Pumas to the nation team, including Hugo Sánchez, Félix Cruz Barbosa, Rafael Amador, Raúl Servín, Miguel España, Manuel Negrete and Luis Flores. This generation of players gave great satisfactions not only to the followers of Pumas, but also to the Mexican football fans.

This decade began with one of the most celebrated championships in club history, the 1990–91 League Championship against arch-rivals Club América. A new generation of players arrived, including Luis García, Jorge Campos, Claudio Suárez, Antonio Sancho, Israel López, Braulio Luna, Rafael García, Jaime Lozano, and Gerardo Torrado. This decade is, however, considered as one of the least successful in terms of championships and development of players. Towards the end of the decade, Hugo Sánchez became manager of the club for the first time.

In 2004, Sánchez led the Pumas to their first championship in thirteen years. The Pumas were able to retain the championship later that year, becoming the first team since the Mexican league was split into two seasons to win back-to-back championships. As of 2010, they remain the only team to achieve this feat. Along with two domestic titles, the Pumas were also able to win both the Campeon de Campeones and the Santiago Bernabeu trophy, defeating Real Madrid in the latter, becoming, as of 2010, the only non-European team to win the cup in Real Madrid's stadium.

In 2005, the Pumas reached the Copa Sudamericana final, where they lost to Boca Juniors in a penalty shoot out. Domestically, the Pumas struggled after their 2004 success and, by 2006, were facing the threat of relegation. Tuca Ferretti was appointed as manager that year in an effort to lead Pumas away from the relegation zone. The stability and discipline that Ferretti brought to the team paid off as the Pumas climbed out of the relegation zone and reached a final in 2007 against Atlante, which they lost 2–1 on aggregate. In 2009, Ferretti once again led the Pumas to a final, this time being victorious against Pachuca in extra time to claim the team's sixth championship. In 2011, Pumas became champions of Clausura 2011 tournament, winning their seventh championship against Monarcas Morelia.

Universidad has strong rivalries with Club América and Cruz Azul. These games are passionate and followed by the whole city. There is also a more recent rivalry with Guadalajara.

The rivalry with Club América, compared to the others, is quite old and began during the '60s, when Universidad won its promotion. The mere fact that both clubs are located in Mexico City generated the right atmosphere to see a rivalry born and grow. A few years later América bought UNAM idol Enrique Borja, even though the player had made a public statement that he did not want to be sold to América. In the '80s the rivalry grew when América defeated Universidad twice in the league finals, always with controversial refereeing decisions[citation needed]. The '90s began with a "victory" of the Pumas over their rivals in the league finals, although it was actually a tie; the first leg was lost 3–2, and only the second leg was a 1–0 win. The aggregate score was 3–3, but UNAM scored two goals as the visiting team, giving them the edge. A new generation of players from the youth system grew up hating their adversaries; this decade is also marked by the birth of Las Barras, who supported both sides but had a much longer background story of rivalry. This rivalry is often referred to as the most violent of the country, with security measures exceeding those of any other game.

The rivalry with Cruz Azul comes out of the fact that both clubs are located in Mexico City, and they have played two league finals against each other as well as many other important matches.

The rivalry with the Chivas originated recently when Jorge Vergara mocked the Pumas after a defeat. The rivalry later intensified when the Pumas and Chivas faced off in the 2004 final, with Universidad Nacional being victorious. In 2005, the Mexican rock group Molotov composed the song "Me Vale Vergara", ridiculing the owner of the Chivas and proclaiming the band's allegiance to Universidad. 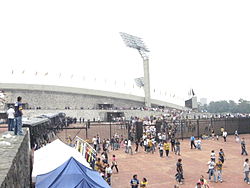 Pumas fans leaving the Ciudad Universitaria Olympic Stadium after a game on Aug 24, 2008