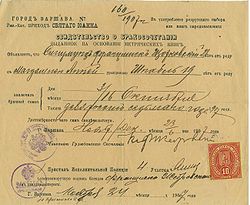 Marriage certificate issued in Russian language in the Congress Poland, 1907 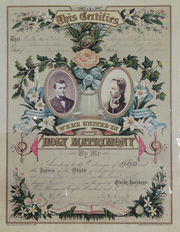 A wedding certificate issued in 1883.

In the United States, the certificate of marriage is recorded on the same document as the marriage license and application for marriage, thus allowing for all information relating to the marriage to be recorded on one document. While each state creates their own form for use with the recording of marriages, most states have a specific portion of the record to be completed by the official performing the ceremony. In some states, this portion also includes places for the parties to indicate a change in name, if any. If there isn’t a place for a name change, the name is changed as requested on government documents with proof of marriage. 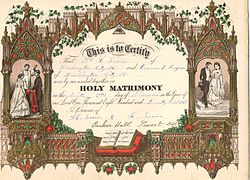 On 1 July 1837 civil registration was introduced in England and Wales, providing a central record of all births, deaths and marriages. A Registrar General was appointed with overall responsibility and the country was divided into registration districts, each controlled by a superintendent registrar. Under this system, all marriage ceremonies have been certified by the issuing of a marriage certificate whose details are also stored centrally. From that date, marriage ceremonies could be performed, and certificates issued either by a clergyman of the Church of England, in a parish church, or by a civil registrar in a civil register office. Marriages performed according to the ceremonies of Quakers and Jews also continued to be recognised as legal marriages, and certificates were issued.

The marriage certificate itself is given to the couple who have married. Copies are made in two registers: one is retained by the church or register office; the other, when the entire register is full, is sent to the superintendent registrar of the registration district. Every quarter, the minister or civil registrar prepares a further copy of all the marriage entries and sends them to the Registrar General.[1]

The certificate lists the date of the marriage, and the full names of both the bride and groom. Their ages are included (it is also permissible to write “full”, meaning of age, and until 1850 some 75% of certificates said that; if the certificate reads “minor” or “under age”, it means that, until 1929 when the law changed to 16, the bride was between 12 and 20 and the groom 14 and 20 years of age).

The certificate also records the previous marital status of the bride and groom. Those not previously married are “bachelor” or “spinster.” From 1858 to 1952 a previously divorced groom was listed as “the divorced husband of…” with his ex-wife’s maiden name listed, and vice versa for a divorced bride. The currently used wording is “previous marriage dissolved” with no further details given.

Unlike birth and death registrations, the local (church) copies of marriage registers for churches are treated as ecclesiastical records and thus are deposited in diocesan record offices or county record offices (often but not always the same office) when full or when the church is closed. Such records are thus available for inspection in their original form (or a direct filmed copy) without the requirement to pay a search fee or the purchase of certified copies. The availability can be somewhat random, some churches have not yet filled their original 1837 registers while others might have deposited a register in recent weeks.