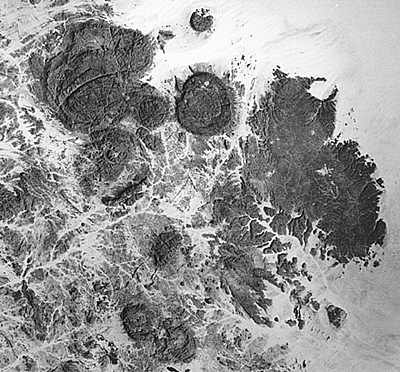 
map_caption =
map_background =
map_location =
map_locator =
website =
footnotes = The Aïr Mountains (also known as the Aïr Massif; the name is Ayăr in Tuareg and Azbin /Abzin in eastern / western Hausa) is a triangular , located in northern , within the . Part of the ecoregion, they rise to more than 6,000 ft (1 830 m) and extend over 84 000 km². [Thorp, M.B. 1969: Some aspects of the geomorphology of the Air Mountains, southern Sahara. Transactions, Institute of British Geographers, 47, 25-46.] Lying in the midst of desert north of the 17th parallel, the Aïr plateau, with an average altitude between 500 and 900 m, forms an island of climate which supports a wide variety of life, many pastoral and farming communities, and dramatic geological and archaeological sites.

The Aïr Mountains consist of intrusions which appear dark in colour (unusual since most granitic masses are light-toned in the field). In the Sahara Desert such mountains often stand out in stark relief as topographic heights amidst lowlands covered by sand. [ [rst.gsfc.nasa.gov/Sect17/Sect17_3.html Use of Remote Sensing in Basic Science Studies] , Section 17, /Primary Author: Nicholas M. Short, Sr. (Site last updated: June 18, 2007).] The terrain consists of high plateau, mountain ranges, and broad, sandy valleys and seasonal wadis which once contained rivers. Areas of these deep, often intersecting, valleys also contain waterborne clay and silt deposits. Underground watercourses in some of these valleys continue to provide yearround oasis and seasonal vegetation.

The Aïr mountains themselves consist of nine almost circular massifs rising from a rocky plateau, bordered by the sand dunes and plain of the Ténéré Desert to the east.

The massif is an eroded , punctuated by a series of flat-topped, granite intrusion peaks, which include (Niger's highest point at 2022 m), [ [http://www.peakbagger.com/peak.aspx?pid=11062 Peakbagger, Mont Bagzane, Niger] : incorrectly calls peak Mont Bagzane. Name of the peak is "Idoukal-n-Taghès", part of the plateau named "Bagzane". Also note, official and international sources believed Mont Greboun to be the highest peak as late as 2001.] (1988 m), (1944 m) [ [http://www.peakbagger.com/peak.aspx?pid=11061 Peakbagger, Mont Greboun, Niger] .] , , , , , , , and . Volcanic features include the extinct caldera of Arakao and one of the largest ring dike systems in the world. [Paul D. Lowman Jr. [http://volcano.und.edu/vwdocs/volc_images/africa/air.html VolcanoWorld: Air, Niger] . North Dakota and Oregon Space Grant Consortia, administered by the Department of Geosciences at Oregon State University.] At , lie the marble Blue Mountains, and the lower is surrounded by white marble hills.

Because of its altitude (on average between 500 and 900 m) and despite its low rainfall (50 to 160 mm/year on the lower plateau), the Aïr forms a green region in comparison with the surrounding deserts, especially after the August-September seasonal rains. The climate is classified as , like that of the regions well to its south. While the mountains are largely bare of vegetation, the dry river valleys (known by the Hausa term "Kori") channel and hold rainwater in s (stone pools, such as that near the town of ), creating oases which provide forage for animals, and in some areas, farming. The high Bagzane plateau of the central Aïr in particular provides adequate rainfall for intensive agriculture. Other, vast, areas of the region are entirely devoid of plant life and with their volcanic protrusions and rock fields present an otherworldly appearance.

The town of in the heart of the country is the capital of Aïr. Much of the Tuareg population of Aïr until recently led a nomadic life, relying essentially on camel and goats from which they take milk, meat and skins used in the production of local handicrafts. Most sedentary populations were either dependents of higher cast Tuareg pastoralists or the ( "Bouzou" in Hausa / "Bella" in ), former slaves and captives of the Tuareg from and other southern peoples. These peoples were settled in northern oases, to tend the plantations held by the noble clans.

Agriculture products from oases such as , and are traditionally exchanged against clothes, or salt, brought by camel caravans () from the remote Tenere oases of and to the east.

The Aïr is known for its , dating from 6000 BC to around AD 1000. During the the region was a area, as is illustrated by images of cattle and large mammals. During the , however, a process of began and the from further north migrated into the region. Later art indicated , depicting s and s. In particular, a five-meter-high carving of a at discovered in 1999 is internationally famous. Cave art in the region is predominantly rock , initially with sharp rock, and from around 1200 BC perhaps with metal. [Trust for African Rock Art. ROCK ART OF SAHARA AND NORTH AFRICA:THEMATIC STUDY. [http://www.icomos.org/studies/rockart-sahara-northafrica/07sous-zone3.pdf David COULSON. Sub-Zone 3: Niger] (June 2007).]

When the Tuareg tribes were pushed south by Arab invaders in the eighth and ninth centuries, there were Gobirwa in the southern Aïr. Successive Tuareg "Tel"s have controlled the area since at least the twelfth century. Agadez, as well as to the east, were the farthest outposts of the in the early 15th century. In the sixteenth century the area fell under the newly created Tuareg , and remained so until the arrival of the French at the end of the 19th.

The emergence of the French weakened the Tuareg Kels and provoked both infighting and resistance to colonialism. From the 1880s, Toubu raids increased, and when the Tuareg rose against the French in 1917, many towns were destroyed on his way to the siege of Agadez. When the French retook Agadez, a brutal through the Aïr left many formerly populous places abandoned, razed by Kaosen and the French successively. [Jolijn Geels. Niger. Bradt London and Globe Pequot New York (2006). ISBN 1841621528]

While the Kel Owey continued to dominate the settled oasis towns and pastoral herding, the sedentary farmers (Tuareg, Hausa, or Songhai) expanded farming and sedentary livestock cultivation in the mid 20th century.

The famines of the 1970s and 1980s brought an end to this expansion, and as and grew, the towns of the Aïr have shrunk. The of the 1990s saw brutal government reprisals which depopulated many villages in the Aïr. Peace from the mid 1990s, as well as the uranium mines of brought unprecedented growth to the region, with many small towns gaining valuable tourism revenue. In 2004, a locust invasion ravaged many gardens, bringing scarcity and contributing to the (beginning in 2007) which continues to plague the region, effectively ending the nascent tourist industry. [Geels (2006)]