The Brotherhood of the Bell

The Brotherhood of the Bell

Infobox Film
name = The Brotherhood of the Bell 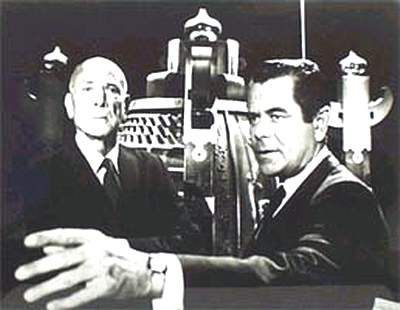 The film relates how a successful professor, Dr. Andrew Patterson, discovers that an elite fraternity he had joined 22 years before in college is really a callous banking and business cabal that obtains wealth and power for its members through nefarious practices.

Twenty-two years after his initiation into a known as the "Brotherhood of the Bell" or "the Bell," Dr. Andrew (Andy) Patterson () is requested to be the "senior" of a new initiate, Phillip Everest Dunning (). The initiation takes place in "the secret chamber of the bell" in the Beta Epsilon Lambda fraternity house of St. George College in at sunrise. Patterson is coldly greeted by the house proctor Weber, who directs him to the library where he meets his "senior" Chad Harmon () of San Francisco, a member for forty years. The initiation takes place before a large bell in the center of points of the depicted on the floor. Phillip Dunning had been studying the articles and letters of the brotherhood since midnight. He is then instructed by Harmon to give them to him to be destroyed. He is sworn to secrecy, and he takes his appropriate place at the due east compass point with Harmon at the south point, Patterson at the west point, and Weber at the north point. He is reminded that he will be given an assignment or "due bill" at some indeterminate time in the future, and instructed that he is obliged to carry it out without question. The four men recite the oath of loyalty and secrecy and end by tolling the bell.

As they leave the fraternity house Chad Harmon gives Patterson a business card with an address written on it, telling him to stop by there before he takes the return flight to . In a parting conversation with his new junior Phillip Dunning, he makes the point of telling him that they are not only part of the establishment but "the" establishment.

Patterson arrives at the address on the business card to find that it is a mansion that is probably unoccupied—the furniture in the parlor he goes to is covered with dust sheets. A tall gray-haired man asks him for the card, and hands him two envelopes. A legal envelope contains the assignment, and a large manila envelope contains materials that assist in carrying out the assignment. Patterson is told to open them one hour after leaving the mansion.

Chad Harmon is then shown in his office being seated for luncheon when Patterson is ushered in. When the two of them are alone, Patterson tells Harmon his assignment: to see to it that a colleague at his institute, Dr. Constantine Horvathy (), decline a deanship of the College of Linguistics in the eastern United States to which he has been appointed. The materials to assist in that assignment are photostated dossiers (pictures and descriptions) of all the men and women in a Communist nation that helped him to defect to the west. Patterson is instructed to send them to the embassy of that nation if Horvathy refuses to comply.

Since Horvathy is a dear friend of Patterson and his wife, Harmon tries to calm Patterson with advice to make his appeal to Horvathy on a personal level, which might eliminate the need of blackmail. Patterson summarily complies when he returns to Los Angeles by seeing Dr. Horvathy just before an evening scholarly presentation.

Dr. Horvathy does not agree to comply with Patterson's request that he decline the deanship, and demands reasons why he should do so. Patterson hands him the dossiers, which terrify Horvathy into hurrying back to his apartment and committing suicide that evening.

Harry Masters and Patterson meet with a Thaddeus Byrnes, whom Masters says is an agent of the "Federal Security Services" (fictitious name for the FBI). They meet in what Byrnes calls a cover office. Byrnes persuades Patterson to surrender the papers he has, which he does. When there is no follow up, Patterson returns to the building, which also houses an ostensible office of the Federal Security Services. An Agent Shepherd () gives Patterson the astounding news that there is no agent Thaddeus Byrnes, and that there is no record of his report to the FSS with information on the Brotherhood of the Bell. Harry Masters when called by Shepherd denies having taken Patterson to see Byrnes, and tells him that Patterson is emotionally disturbed and needs to consult a psychiatrist.

Coincidentally, when Patterson goes again to Harry Master's home he finds him in his study with a psychiatrist. Patterson ends the visit with the statement, "You're a damned liar, Harry!" Patterson then finds out that his entire branch of economics at his college must be discontinued by the Dean Dr. Jerry Fielder () due to a rash stoppage of grant money. Patterson is then "black-listed" so that he cannot acquire employment elsewhere as a professor. The strain of all of this causes Vivian and him to separate as he realizes that all he has ever had in life for the past 22 years has been given to him because he was a brother of the Bell.

Patterson holds a press conference in which he discloses the existence of the Brotherhood of the Bell and his assignment from them that brought about Constantine Horvathy's death. It is denied by Chad Harmon, and the local district attorney discounts it on lack of evidence.

His father Mike Patterson (), who is a road construction contractor, is also ruined by a sudden audit of Patterson Construction's books. The elder Patterson suffers a stroke in a confrontation with Harry Masters and dies shortly thereafter.

Dr. Patterson has now become a crusader to expose and destroy the Brotherhood of the Bell. He appears on a local television talk show hosted by Bart Harris (), who conducts an on-the-air forum of people, who respond to his guests. Since Patterson alleges a conspiracy, two eccentric forum participants claim that they know all about it as something altogether different. Harris humiliates Patterson by telling him that he is too is part of a lunatic fringe in the , which finds conspiracy everywhere. Patterson attacks Harris physically and is led off to jail.

Help comes from an unexpected quarter when his friend Dr. Fielder bails him out of jail and has him stay at his home. He encourages Patterson to find another brother of the Bell to come forward with him. Patterson can think of no one who would do this but his own junior Phillip Dunning. He flies to San Francisco, and confronts Dunning in his dorm room early in the morning. Feeling he has failed to convince Dunning, he dejectedly returns to the airport. He is shown walking down a deserted corridor of the airport when he hears footsteps of someone running towards him. It is Dunning rushing to meet up with him to go back to Los Angeles and do what Dr. Fielder had suggested.

The film has been interpreted as a highly speculative portrayal of real-life, academic-based s, such as and others. It has also been seen by some as a satire on the "unexamined life" and on the hidden, unsavory undercurrents of ordinary society.

Filming locations
The picture was filmed at when scenes at the fictional College of St. George take place. [ [http://www.pomona.edu/magazine/PCMsp05/FScampusfilm.shtml Balchunas, Michael] . "Pomona College Magazine", "The Duke on the Quad and other Hollywood tales on the Pomona College campus," Spring 2005.]

*
*
* [http://einsiders.com/reviews/videorisks/brotherhoodofthebell.php "The Brotherhood of the Bell"] at Entertainment Insiders