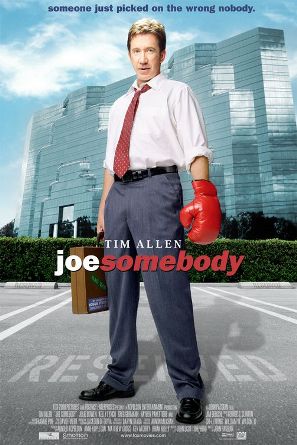 "Joe Somebody" is a 2001 film starring as a man pushed to do something about a work-place bully. It was released on .

Everybody wants to be somebody and Joe Scheffer is no exception. But Joe feels like he's a nobody. A talented audio-video specialist at work, he's been regularly passed over for promotion. And Joe is faring no better in his personal life, as he still pines for ex-wife Callie.

It's "Take Your Daughter To Work Day" at STARKe Pharmeceuticals, Joe's place of employment, which segregates its parking areas by tenure. As Joe frantically tries to find a space, office bully Mark McKinney whizzes past Joe's bland in his massive SUV, cutting him off and shooting for the parking spot Joe is after. Angry, Joe gets out of his car and confronts McKinney, who threatens him by telling him that he has five seconds to get back in his car or face humiliation in front of his daughter. Joe protests, and Mark delivers the promised blows.

STARKe human resources personnel, Meg and Jeremy (who have a history), then get involved, sending McKinney to anger management courses. After Joe fails to show up for work after three days, Meg Harper shows up at his home, trying to convince him to come back to work. She ignites a fuse in him when she says "What do you want?" in a fit of frustration after Joe refuses to listen to her. Floored at the thought of someone caring enough to ask him this for the first time, Joe finally confides in Meg.

Joe comes back to work, where Meg and Jeremy expect him to call McKinney to patch things up. Instead, Joe challenges McKinney to a rematch over the phone. The first step: martial arts instruction. Joe enlists the help of Chuck Scarett, a washed-up martial-arts B movie actor turned instructor, who builds Joe's confidence as well as his body.

Next: a makeover that reaps unexpected dividends. As news spreads of the rematch, Joe makes an unexpected ascent up the corporate ladder. But his daughter Natalie makes it clear she liked her dad the way he was. Also unimpressed with Joe's transformation is the plucky Meg, who's sparked Joe's romantic interest. Meg also learns from Jeremy that Joe's 'promotion' was created as part of the company's 'presidential compliance' policy, which essentially gives Joe anything he wants until the statute of limitations runs out where Joe can't sue STARKe for creating a hostile work environment. When Meg asks what happens after the statute runs out, Jeremy appears unconcerned, knowing that she has feelings for Joe.

Knowing that she could one day be forced to fire or demote the man she's falling for, Meg quits STARKe to take a teaching job, where the pay is lower, but it brings her greater satisfaction. She begs Joe not to fight McKinney, but her attempts are futile.

As the showdown with the once-feared colleague nears, Joe is determined to show Meg, Natalie - everybody - that this one-time nobody is now a somebody to be reckoned with. The morning of the fight, the movie shows parallels of both Joe and McKinney, who wakes up with a picture of him and his son visible on a nightstand, but no wife. McKinney also doesn't wear a wedding band, further suggesting that he too is a single father, and his own emotional hurts could be the reason behind the confrontation with Joe.

McKinney wakes up, trying to steady his trembling hands. Joe looks in the mirror, trying to coax the fear out of him. He gets in his car and drives to the school where the fight is to take place. Natalie rides up on her bike in a last-ditch effort to stop him, but he drives off without seeing her. He arrives at the school, where a large crowd of his co-workers have gathered, along with McKinney and Scarett. As the crowd parts in half to allow him access to McKinney, Joe says to himself "I can do this". As he says it, he looks down and sees McKinney's trembling hand. Knowing that Joe has seen his hand, McKinney shouts "Come on! You want some?", and is immediately on the defensive.

Joe remains still, saying again "I can do this". McKinney, seeing Joe not react to him, says "Are we gonna fight or not?" Joe thinks for a moment, then looks in McKinney's eyes and forcefully says "We're not!" McKinney breathes a sigh of relief and the bloodthirsty crowd groans. Scarett, though bewildered at Joe's actions, is satisfied, knowing that Joe has learned the important lesson of the martial arts: to be used for defense only.

As Joe turns to leave, a contrite, subdued McKinney apologizes to him, which Joe accepts. While Joe is walking away, a bloodthirsty Jeremy, who was aching to see Joe get throttled by McKinney, tells him he's going to fight McKinney or fight him. Jeremy shoves Joe, who answers back with a defense move to the windpipe that Scarett taught him after he first walked into his dojo.

Joe then drives to Meg's school, in an effort to patch things up with her, knowing she'll be angry with him for fighting over a parking space. He does so by parking in her own reserved space. When Joe comes up to her SUV and tells her he's crazy about her, she gets out of her vehicle and angrily says "You're crazy about me?" as she shoves him around the parking lot until he grabs her wrists, forcing her to stop. She begins to cry as Joe tells her he chose not to fight McKinney, as the whole reason wasn't worth fighting for...but she is.

Finally won over, she says "You put up one hell of a fight, Joe".

The film currently has a "Rotten" rating of 20 % at the review scaling site . [http://www.rottentomatoes.com/m/joe_somebody/] Critics compared it to a sitcom and cited a formulaic plot and dialogue.