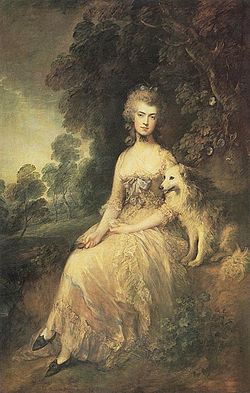 Mary Robinson (née Darby) (27 November 1757 – 26 December 1800) was an English poet and novelist. During her lifetime she is known as 'the English Sappho'.[1][2] She was also known for her role as Perdita (heroine of Shakespeare's The Winter's Tale) in 1779 and as the first public mistress of George IV.

Mary Darby was born in Bristol, England to John Darby, a naval captain, and Hester Seys. According to her memoirs,[3] Mary gives her birth in 1758 but the year 1757 seems more likely according to recently published research (see appendix to Byrne, 2005). Her father deserted her mother and took on a mistress when Mary was still a child. The family hoped for a reconciliation, but Captain Darby made it clear that this was not going to happen. Without the support of her husband, Mrs Darby supported herself and the five children born of the marriage by starting a school for young girls (where Mary taught by her 14th birthday). However, during one of his brief returns to the family, Captain Darby had the school closed (which he was entitled to do by English law). Mary, who at one point attended a school run by the social reformer Hannah More, came to the attention of actor David Garrick.

Mary's mother encouraged her to accept the proposal of an articled clerk, Thomas Robinson, who claimed to have an inheritance. Mary was against this idea, however after being stricken ill, and watching him take care of her and her younger brother, she felt that she owed him, and she did not want to disappoint her mother who was pushing for the engagement. After the early marriage, Mary discovered that Thomas Robinson did not have an inheritance. Mr. Robinson continued to live an elaborate lifestyle however, and had multiple affairs that he made no effort to hide. Subsequently, she supported their family. After her husband squandered their money, the couple fled to Wales (where Mary's only living daughter was born in November). The family lived under house-arrest after Thomas Robinson was imprisoned for debt. During this time, Mary Robinson found a patron in Georgiana, Duchess of Devonshire who sponsored the publication of Robinson's first volume of poems, Captivity.

After her husband obtained his release from prison, Robinson decided to return to the theater. She launched her acting career and took to the stage, playing Juliet, at Drury Lane Theatre in December 1776. Robinson was best known for her facility with the 'breeches parts', her performances as Viola in Twelfth Night and Rosalind in As You Like It won her extensive praise. But she gained popularity with playing in Florizel and Perdita, an adaptation of Shakespeare, with the role of Perdita (heroine of Shakespeare's The Winter's Tale) in 1779. It was during this performance that she attracted the notice of the young Prince of Wales, later King George IV of Great Britain and Ireland, who offered her twenty thousand pounds to become his mistress. With her new social prominence, Robinson became a trend-setter in London, introducing a loose, flowing muslin style of gown based upon Grecian statuary that became known as the Perdita. It took Mary a considerable amount of time to decide to leave her husband for the Prince, as she did not want to be seen by the public as that type of woman. Throughout much of her life she struggled to live in the publics eye and also stay true to the values that she believed in. She eventually gave in to her desires to be with a man whom she thought would treat her better than Mr. Robinson. However, The Prince ended the affair in 1781, refusing to pay the promised sum.[4] "Perdita" Robinson was left to support herself through an annuity promised by the Crown (but rarely paid), in return for some letters written by the Prince, and through her writings. She again was alone and broke, and could no longer return to the stage because the public would not support her after her affair with the Prince. 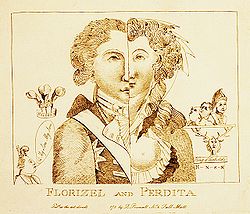 Caricature of the Prince of Wales as Florizel and Mary Robinson as Perdita, 1783

After seeing her as Perdita, and declaring himself enraptured with her, the Prince of Wales offered Mary Robinson twenty thousand pounds to become his mistress. However, he soon tired of her and abandoned her after a year, refusing to pay the money. Her reputation was destroyed by the affair, and she could no longer find work as an actress. Eventually, the Crown agreed to pay Robinson five thousand pounds, in return for the Prince's love letters to her. Some time later she was able to negotiate a small annuity (five hundred pounds) from the Crown, but this was rarely paid.

Mary Robinson, who now lived separately from her philandering husband, went on to have several love affairs, most notably with Banastre Tarleton, a soldier who had recently distinguished himself fighting in the American War of Independence. Their relationship survived for the next 15 years, through Tarleton's rise in military rank and his concomitant political successes, through Mary's own various illnesses, through financial vicissitudes and the efforts of Tarleton's own family to end the relationship. They had no children, although Robinson had a miscarriage. However, in the end, Tarleton married Susan Bertie, an heiress and an illegitimate daughter of the young 4th Duke of Ancaster, and niece of his sisters Lady Willoughby de Eresby and Lady Cholmondeley.

In 1783, at the age of 26, Robinson suffered a mysterious illness that left her partially paralyzed. Biographer Paula Byrne speculates that a streptococcal infection resulting from a miscarriage led to a severe rheumatic fever that left her disabled for the rest of her life. From the late 1780s, Mary Robinson became distinguished for her poetry and was called "the English Sappho." In addition to poems, she wrote six novels, two plays, a feminist treatise, and an autobiographical manuscript that was incomplete at the time of her death. Like her contemporary Mary Wollstonecraft, she championed the rights of women and was an ardent supporter of the French Revolution. She died in late 1800 in poverty at the age of 42, having survived several years of ill health, and was survived by her daughter, who was also a published novelist.

After years of scholarly neglect, Robinson's literary afterlife continues apace. In addition to regaining cultural notability because of scholars who study her writing, she again attained a degree of celebrity in recent years when several biographies of her appeared, including one by Paula Byrne that became a top-ten bestseller after being selected for the Richard & Judy Book Club. However, most of the literature written about Mary has focused on her as a sex symbol, emphasizing her affairs and elaborately clad body. It wasn't until the 1990's that she began to receive the attention of feminists, but even their works are highly specified towards the Romantic Period of literature. Fortunately there is current research going on about Mary and other women like her.