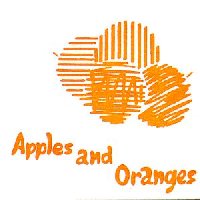 The Pink Floyd, along with Barrett, mimed the song on their first US televised performance on "". After Barrett was replaced by , the band recorded a promotional film in Belgium in a fruit market with Waters lip synching.

This was the group's first single that failed to break into the U.K. charts, and their U.S. label Tower Records issued a U.S.-only single instead: "Flaming" b/w "" (Tower 378.) The failure of "Apples and Oranges" has been cited as one of the major causes of 's increasing mental instability during 1967.Fact|date=July 2008 Waters blamed the single's sales performance on Norman Smith: "'Apples and Oranges' was destroyed by the production. It's a fucking good song."

Both sides of the single were mixed for stereo, but Columbia elected to release it in mono since stereo singles were not a standard in the U.K. at that time. Therefore the mono and stereo versions are identical (when heard in mono), but "Apples and Oranges" in particular has been regarded as sounding muddy in mono, probably because it was mixed to sound best in stereo, without regard to how reduction to mono would sound. The stereo mix of "Paintbox" first appeared on the "Relics" compilation (1971), and both tracks appeared in stereo on the "Masters of Rock" compilation (1974). The other four early U.K. singles were mixed for mono originally, and some ("", "", "", and "") only exist in mono or false stereo, while others ("" and possibly "") were remixed for stereo at a later time, for inclusion on "Relics". Even though mono and stereo versions of the tracks for this single are essentially the same, both masters are included in the 40th Anniversary Deluxe Edition release of "". [ [http://www.pinkfloyd.co.uk Official website] ]

*"It's a happy song, and it's got a touch of Christmas. It's about a girl who I saw just walking round town, in Richmond." – Syd Barrett