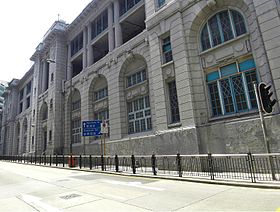 Central Police Station (Chinese: 中區警署) is a former police station, located at the eastern end of Hollywood Road, in Central, Hong Kong. It is awaiting development following its decommissioning. 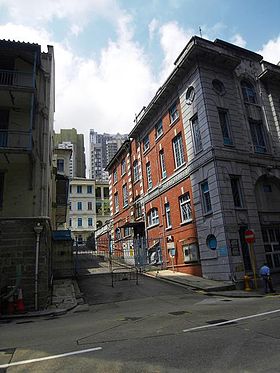 The oldest structure within the police station was built in 1864; it is a three-storey barrack block constructed adjacent to Victoria Prison. A storey was later added to the block in 1905. Other blocks were added between 1910 and 1925. In 1919, Headquarters Block facing Hollywood Road was constructed. Subsequently in 1925, the two-storey Stable Block was constructed at the north-west end of the parade ground and later used as an armoury.

Many police stations were built during this period due to the large number of people who moved to Hong Kong from mainland China and the corresponding increase in difficulty with maintaining law and order.

The compound is bordered on the North by Hollywood Road, on the South by Chancery Lane, on the East by Upper Albert Road and on the West by Old Bailey Street. 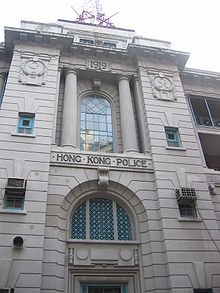 The letters "G" and "R" above the entrance to the police station is a symbol of George V of the United Kingdom.

With its long history and antiquated architectural style, the Central Police Station is one of the last physical reminders of Hong Kong's colonial heritage.

However, the Central Police Station will have to face a reconstruction in the near future since the Government intends to convert the Police Station and the former Central Magistracy into modern food plazas, a museum and an art gallery. Victoria prison may also be converted into either a theatre or a museum. By adaptive reuse, the renovated police station compound will then become a tourist destination with historical significance, a rarity amongst Hong Kong attractions.

On 20 October 2010, Hong Kong Jockey Club announced that a heritage-led plan to conserve and revitalise the Central Police Station ("CPS") and transform it into a centre of heritage, arts and leisure. The Hong Kong Jockey Club Charities Trust has agreed to support the capital cost of the revitalisation of the CPS. As a not-for-profit organisation, the Trust does not expect an investment return.[1]

Herzog & de Meuron (HdM), Purcell Miller Tritton (PMT) and Rocco Design Architects Ltd (RDA) have worked together and examined many different alternative schemes in order to establish the best design for adaptive re-use. Given the physical constraints of the site, two new buildings will be added, the "Old Bailey Wing" and "Arbuthnot Wing". The new buildings, occupying 22% of the total floor area, will provide arts, culture and building services space which cannot be accommodated in the heritage buildings.[1]

In addition to the existing public entrance at Pottinger Gate, an Old Bailey Gate, an Arbuthnot Gate and a footbridge connection to the Mid-levels Escalator are planned. Stairs and lifts will be provided to facilitate pedestrian connectivity between the upper courtyard near Chancery Lane and lower courtyard near Hollywood Road, and between SoHo and Lan Kwai Fong.[1]