Lewis William Walt ( &ndash; ), also known as Lew Walt, was a officer who served in , the , and the . His decorations included two es and two Distinguished Service Medals. He retired with the rank of four-star general.

After leading the attack on Aorgiri Ridge during the , the ridge was renamed renamed Walt's Ridge in his honor.

Lewis William Walt was born on , in . He graduated from high school in , then entered , and was awarded a degree in upon graduation in 1936. Highlights of his student activities include: honor graduate, President of Student Body and Student Council, Captain of football team and wrestling team, Cadet Colonel of the ROTC, President of chemistry club and Captain of . He enlisted in the Colorado National Guard at the age of 17. Upon graduation he was commissioned a second lieutenant in the Army Field Artillery Reserve, but resigned that commission to accept an appointment as a Marine second lieutenant on .

Lieutenant Walt completed at Philadelphia, and in April 1937 was assigned to the 6th Marine Regiment in as a platoon leader. Embarking for in August 1937, he took part in the defense of the International Settlement of until February 1938, at which time he returned to San Diego. In June 1939, he began his second tour of overseas duty when he was assigned to the Marine Barracks, , . He was promoted to first lieutenant in October 1939.

Returning to the United States in June 1941, shortly before his country's entry into , Lieutenant Walt was assigned as a company commander in the Office Candidates' Class, Marine Corps Schools, Quantico, Virginia. He was promoted to captain in December 1941.

Early in 1942, Captain Walt volunteered to join the 1st Marine Raider Battalion, and in April 1942 arrived with the battalion on . On , as commander of Company A, 1st Raider Battalion, he landed his company in the assault on Tulagi Island in the . He was awarded the Medal for conspicuous gallantry during this landing. Following this action, he joined the on where he took part in combat as of the 2nd Battalion, 5th Marines. He was promoted to major in September 1942. 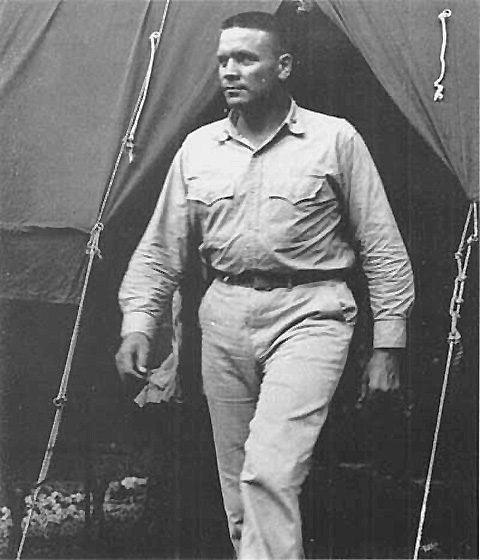 In October 1942, as Battalion Commander, 2nd Battalion, 5th Marines, 1st Marine Division, Major Walt was but continued in combat. On , he was spot promoted to lieutenant colonel for distinguished leadership and gallantry in action during the Guadalcanal campaign.

In December 1943, following hospitalization and training in , Lieutenant Colonel Walt led the 2nd Battalion, 5th Marines, in the assault at Cape Gloucester, , and shortly thereafter was assigned as Regimental Executive Officer. In the middle of this campaign he was ordered to take over command of the 3rd Battalion, 5th Marines, during the intense battle for Aogiri Ridge. During this action, he earned his first Navy Cross and Aogiri Ridge was named "Walt Ridge" in his honor by General , 1st Marine Division Commander.

Departing Cape Gloucester in late February 1944, Lieutenant Colonel Walt was ordered to the Naval Hospital, , for treatment of wounds and . In June 1944, he returned to the Pacific area. That September, he landed at Peleliu as Regimental Executive Officer, 5th Marines. On he was again ordered to take over command of the 3rd Battalion, 5th Marines, in the midst of the battle for the beachhead, when the Commanding Officer and Executive Officer were both killed. His second Navy Cross was awarded to him for gallantry this action.

In November 1944, Lieutenant Colonel Walt returned to the United States, and the following month assumed duty at Marine Corps Schools, Quantico, as Chief of the Officer Candidates' School Tactics Section.

Assigned to Camp Pendleton in January 1947, Lieutenant Colonel Walt served as Assistant Chief of Staff, G-3, 3rd Marine Brigade, and then as G-3, 1st Marine Division. In November 1947, he assumed duty as Operations and Training Officer, 1st Provisional Marine Brigade on Guam, and later served as Chief of Staff of that organization from February to April 1949. Returning to Marine Corps Schools, Quantico, in May 1949, he saw duty as a battalion commander with the Special Training Regiment; and in September, he entered the Amphibious Warfare School, Senior Course. On completing the course in June 1950, he remained at Marine Corps Schools to serve as Chief of Tactics Section, S-3, and finally, Executive Officer, The Basic School. He was promoted to colonel in November 1951.

Colonel Walt was ordered to in November 1952. He was in combat with the 1st Marine Division until August 1953, serving consecutively as Commanding Officer, 5th Marines, Assistant Chief of Staff, G-3, and Chief of Staff of the Division. The and Bronze Star, both with Combat "V", were awarded to him for exceptionally meritorious service during this assignment. The Republic of Korea government also awarded Colonel Walt the Ulchi Medal and the Ulchi Medal with Silver Star for this period of combat.

Transferred to Washington, D.C., Colonel Walt served as Assistant Director of Personnel until August 1959, then entered the , Washington, D.C.. He completed the course in June 1960.

In July 1960, Colonel Walt began a one-year assignment as Marine Corps Representative on the Joint Advanced Study Group of the . Upon completing this assignment, he was promoted to brigadier general and reported for duty at Camp Lejeune as Assistant Division Commander, 2nd Marine Division. In September 1962, General Walt returned to Marine Corps Schools, Quantico, serving as Director of the Marine Corps Landing Force Development Center there until May 1965.

That same month, he was promoted to major general, and in June 1965 assumed command of III Marine Amphibious Force and 3rd Marine Division in . He was also Chief of Naval Forces, Vietnam and Senior Advisor, I Corps and I Corps Coordinator, Republic of Vietnam.

Ten months later, General Walt was nominated for lieutenant general by President , and his promotion was approved by the Senate on . He continued in Vietnam as Commanding General, III Marine Amphibious Force, and Senior Advisor, I Corps and I Corps Coordinator, Republic of Vietnam. During this period, General Walt was awarded his first Distinguished Service Medal. In addition, the Vietnamese government awarded General Walt the Vietnamese National Order, 3rd Class; the Vietnamese National Order, 4th Class; the Gallantry Cross with Palm; the Chuong My Medal, and the Vietnamese Armed Forces Meritorious Unit Citation of Gallantry Cross with Palm. He was also awarded the senior Ulchi Medal by the Government of South Korea.

As a testament to his vital role in Vietnam, "Life" magazine featured General Walt in a May 1967 cover story. The article noted the success of an innovative program initiated by General Walt in August 1965 called Combined Action Company (CAC). This program sent squads of Marine volunteers into the countryside to assist local part-time militia men known as Popular Forces. As "Life" noted, "His CAC units all had the same orders: help protect the villages, get to know the people, find the local Communist infrastructure and put it out of business." General Walt stressed the importance of using CAC to win the confidence of average, ordinary Vietnamese citizens. The magazine observed, "If these people could be located and won over, Walt argued, the Communists would be hit where it hurts." Because of his CAC program, the number of "secure" villages under General Walt's protection rose between 1965 and 1967 from 87 to 197, while the number of Vietnamese living in "secure" areas in general rose from 413,000 to 1.1 million. [cite news
title=The Two Wars of General Walt
author=Colin Leinster
work=LIFE Magazine
pages=83-84
date=May 26, 1967]

Upon his return to the United States, General Walt saw duty from June 1967 until the following December as Deputy Chief of Staff (Manpower)/Director of Personnel, at . On , he was designated Assistant Commandant of the Marine Corps.

While visiting the Taiwan Defense Command in April 1970, General Walt was presented the with Grand Cordon, by General of the Republic of China. Presented by the Chief of the General Staff, the citation recognized the Assistant Commandant's "exceptionally meritorious conduct in the performance of outstanding service to the Chinese Marine Corps." The citation noted that General Walt had "contributed immensely in the furtherance of military cooperation and traditional friendship between the United States of America and the Republic of China."

General Walt retired from active duty on and subsequently served as Director of the United States Marines Youth Foundation. He later coordinated a U.S. Senate investigation on international . In the mid-1970s General Walt served as the senior military member of President 's board, and he later advised the Department of Defense on weapons development and combat training.

A complete list of General Walt's medals and decorations includes:

* (with Gold Star in lieu of second award)

* (with Gold Star in lieu of second award)

* (with bronze star in lieu of second award)

* (with one bronze star)

:"This article contains text in the from the ."