Otter
This article is about the carnivorous mammals. For other uses, see Otter (disambiguation).

The Otters are twelve species of semi-aquatic (or in one case aquatic) mammals which feed on fish and shellfish, and also other invertebrates, amphibians, birds and small mammals.

The word otter derives from the Old English word otor or oter. This and cognate words in other Indo-European languages ultimately stem from the PIE root *wódr̥ which also gave rise to the English word water.[1][2]

An otter's den is called a holt or couch. A male otter is a dog, a female a bitch, and a baby a whelp, kit, or pup.[citation needed] The collective nouns for otters are bevy, family, lodge or romp, being descriptive of their often playful nature, or when in water raft.

The time of gestation in otters is about 60 to 86 days. The newborn pup is taken care of by the mother, the father, and all the other offspring. Female otters reach sexual maturity at approximately two years of age, while males can produce offspring at approximately three years of age. After one month, the young otter can come out of the cave, and after two months, it is able to swim. It lives with its family for about one year so that it can learn and be kept safe until maturity. Otters live up to 16 years.

Otters have long, slim bodies and relatively short limbs, with webbed paws. Most have sharp claws on their feet, and all except the sea otter have long muscular tails. The twelve species range in adult size from 0.6 to 1.8 metres (2 to 6 feet) in length and 1 to 45 kilograms (2.2 to 100 pounds) in weight. The Oriental small-clawed otter is smallest otter species and the giant otter and sea otter are the largest. They have a very soft, insulated underfur which is protected by an outer layer of long guard hair. This traps a layer of air, and keeps them dry and warm under water.

Many otters live in cold waters and have very high metabolic rates to help keep them warm. Eurasian otters must eat 15% of their body weight a day, and sea otters 20 to 25%, depending on the temperature. In water as warm as 10°C (50°F), an otter needs to catch 100 grams (3.5 oz) of fish per hour to survive. Most species hunt for three to five hours a day, and nursing mothers up to eight hours a day.

For most otters, fish is the staple of their diet. This is often supplemented by frogs, crayfish and crabs.[3] Some otters are expert at opening shellfish, and others will feed on available small mammals or birds. Prey-dependence leaves otters very vulnerable to prey depletion.

Otters are very active, chasing prey in the water or searching the beds of rivers, lakes or the seas. Most species live beside water, but river otters usually enter it only to hunt or travel, otherwise spending much of their time on land to avoid their fur becoming waterlogged. Sea otters are highly aquatic and live in the ocean for most of their lives.

Otters are playful animals and appear to engage in various behaviors for sheer enjoyment. Different species vary in their social structure, with some being largely solitary, while others live in groups – in a few species these groups may be fairly large. 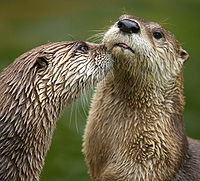 The northern river otter (Lontra canadensis) became one of the major animals hunted and trapped for fur in North America after European contact. River otters eat a variety of fish and shellfish, as well as small land mammals and birds. They grow to one meter (3 to 4 ft) in length and weigh from five to fifteen kilograms (10 to 30 lb).

In some areas, this is a protected species, and some places have otter sanctuaries, which help sick and injured otters to recover. 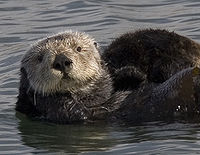 Sea otters (Enhydra lutris) live along the Pacific coast of North America. Their historic range included shallow waters of the Bering Strait and Kamchatka, and as far south as Japan. Sea otters have about 26,000 to 165,000 strands of hair per square centimetre of skin,[6] a rich fur for which humans hunted them almost to extinction. By the time the 1911 Fur Seal Treaty gave them protection, so few sea otters remained that the fur trade had become unprofitable. Sea otters eat shellfish and other invertebrates (especially clams, abalone, and sea urchins),[7] frequently using rocks as crude tools to smash open shells. They grow to 1.0 to 1.5 metres (2.5 to 5 ft) in length and weigh 30 kilograms (65 lb). Although once near extinction, they have begun to spread again, from remnant populations in California and Alaska.

Unlike most marine mammals (such as seals or whales), sea otters do not have a layer of insulating blubber.[7] As with other species of otter, they rely on a layer of air trapped in their fur, which they keep topped up by blowing into the fur from their mouths. They spend most of their time in the water, whereas other otters spend much of their time on land. 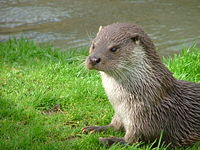 This species (Lutra lutra) inhabits Europe, and its range also extends across most of Asia and parts of North Africa. In the British Isles, they occurred commonly as recently as the 1950s, but became rare in many areas due to the use of chlorinated hydrocarbon pesticides and as a result of habitat loss and water pollution (they remained relatively common in parts of Scotland and Ireland). Population levels attained a low point in the 1980s, but are now recovering strongly. The UK Biodiversity Action Plan envisages the re-establishment of otters by 2010 in all the UK rivers and coastal areas they inhabited in 1960. Roadkill deaths have become one of the significant threats to the success of their re-establishment.

The giant otter (Pteronura brasiliensis) inhabits South America, especially the Amazon river basin, but is becoming increasingly rare due to poaching, habitat loss, and the use of mercury and other toxins in illegal alluvial gold mining. This gregarious animal grows to a length of up to 1.8 meters (6 ft), and is more aquatic than most other otters.

For countless generations, fishermen in southern Bangladesh have bred otters and used them to chase fish into their nets. Once a widespread practice passed down from father to son throughout many communities in Asia, this traditional use of domesticated wild animals is still in practice in the district of Narail, Bangladesh.

Norse mythology tells of the dwarf Ótr habitually taking the form of an otter. The myth of Otter's Ransom[8] is the starting point of the Volsunga saga.

In some Native American cultures, otters are considered totem animals.

The otter is held to be a clean animal belonging to Ahura Mazda in Zoroastrian belief, and taboo to kill.[9]

In popular Korean mythology, it is told that a person who sees an otter (soodal) will attract 'rain clouds' for the rest of the life.

Tarka the Otter, by Henry Williamson, published 1927, gives a vivid portrayal of an otter's life in the rivers of Devon at a time when otter hunting was still legal. It was made into a film of the same name in 1978, co-scripted by Gerald Durrell and narrated by Peter Ustinov.

Emmet Otter's Jug-Band Christmas is a children's storybook by Russell Hoban that was adapted by Jim Henson and Paul Williams into a musical television special and by The Jim Henson Company into a live musical stage show.

In Brian Jacques' Redwall series, otters are depicted as kind, intelligent, creatures on land and sea. However, when it comes to defending their abbey home, they are fierce and strong warriors.

PB&J Otter, a Disney animated cartoon, ran from 1998 to 2000. Its main characters were otters.

Gavin Maxwell's book Ring of Bright Water tells the tale of how he brought a Smooth-coated Otter (Lutrogale perspicillata) back from Iraq and raised it in 'Camusfearna' (Sandaig), on the west coast of Scotland.[10]

In the book and movie Harry Potter and the Order of the Phoenix, Hermione Granger's Patronus takes the shape of an otter.[12]

Rigby's counterpart Doug Shlibowski from Regular Show episode "Temp Check" is an evil otter that tries to replace him as Mordecai's friend.