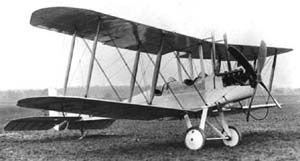 A B.E.2a of No.2 Squadron R.F.C. was the first aircraft of the Royal Flying Corps to arrive in after the start of the First World War, on August 26, 1914.

Well into 1917 the last front-line B.E.2e was withdrawn, long after the type was obsolete. It continued in service throughout the war as a home defence fighter, in which role it was for a time a surprising success, and as a trainer.

Some 3,500 B.E.2s were built by over 20 different manufacturers: an exact breakdown between the different models has never been made, although the B.E.2c was almost certainly the most numerous. The B.E.2c formed the basis for a dedicated single-seater version, the B.E.12, which was built in numbers.

Faults of the type

The B.E.2 has always had a very bad press, and had become an unpopular aircraft by 1916.

By this time it had at least three serious weaknesses as a warplane. The first was that its small air-cooled inline motor made it seriously underpowered, and was unreliable even by the standards of the time. When bombs were to be carried or maximum endurance was required, the observer and his gun had to be left behind. [Cheesman, 1962] Although the B.E.2 had a reasonable performance for 1914/15 it remained in service long after much more powerful aircraft had become available to the enemy.

The second weakness stemmed from this. As was often flown as a single-seater, it was necessary to have the observer's cockpit over the centre of gravity, in front of the pilot. The gunner was hampered by the struts and wires supporting the centre section of the top wing (see illustration), and at best had to shoot back over his pilot's head.

The third weakness is more controversial. In 1912 and following years there was a good deal of controversy about two competing aircraft design philosophies. One, typified by the , said that an aeroplane should be inherently unstable, and that deviations from straight and level flight should be corrected by the pilot. Aircraft designed on this principle tended to be agile, but required constant vigilance and attention and a fair degree of skill from the pilot. The opposing philosophy strove towards an aircraft that, while it could be steered, largely kept itself steady in the air, and diverged from straight and level flight only when its pilot wanted it to. This tendency naturally worked against desired changes in flight attitude as well as involuntary ones, and reduced maneuverability. Since the standard of pilot training was so poor in the RFC a stable aircraft had real advantages, but it did make it difficult to escape a more aerobatic enemy, even if pilot skills had permitted it. There is however a good deal of evidence in contemporary accounts that suggests that the B.E.2 was less stable and more maneuverable than it was supposed to have been.

The essential vulnerability of the B.E.2 became plain in late 1915, with the advent of the first German fighters. This led the British press to dub it "", while German pilots nicknamed it "kaltes Fleisch" ("cold meat"). British ace summed it up as "a bloody awful aeroplane". Unable to cope with such a primitive fighter as the , it was virtually helpless against the newer German fighters of 1916-17. The aircraft's poor performance against the and the failure to improve the aircraft or replace it caused great controversy back in England, with attacking the B.E.2 and the Royal Aircraft Factory in the British House of Commons on 21 March 1916, saying that RFC pilots in France were being "rather murdered than killed".

An incident illustrating both the poor level of piloting skills with which new RFC. pilots were sent to France in 1917 and the level of popularity of the B.E.2e on the is recorded by Arthur Gould Lee, then a young R.F.C. novice, in his book "No Parachute". On May 19, 1917 six pilots newly arrived in France and still to be allocated to a squadron were each given a new B.E.2e to ferry between RFC depots at and Candas. One crashed in transit, three crashed on landing and one went missing (the pilot was killed). Lee, the pilot of the only aircraft to arrive safely, wrote in a letter to his wife:

:"I felt rather a cad not crashing too because everyone is glad to see death-traps like Quirks written off, especially new ones."

Fortunately the B.E.2e was by this time already being rapidly replaced on the Western Front by the R.E.8 and F.K.8, but for far too many young airmen this was more than a year too late.

From 1917 onwards, the B.E.2 was mostly withdrawn from the front line but continued in use for spotting and as a trainer. Before this it had already been the first effective .

As early as 1915 the B.E.2c had been used in attempts to intercept and destroy the German raiders, known as "s" by the British, although several of them were built by other makers. The "interceptor" version of the B.E.2c was flown as a single-seater with an auxiliary fuel tank on the centre of gravity, in the position of the observer's seat in the reconnaissance version. After an initial lack of success while using darts and small incendiary bombs to attack airships from above, a was mounted to fire incendiary ammunition upwards, at an angle of 45°. The tactic proposed was to attack the airship from below, in a similar manner to that later employed by German night fighters in the Second World War (). This proved very effective.

The first successful attack took place on the night of September 3, 1916, when a B.E.2c flown by Captain William Leefe Robinson downed the first German airship to be shot down over Britain, winning Robinson a and cash prizes totalling £3,500 that had been put up by a number of individuals for the first Zeppelin kill over the British Isles.

This was not an isolated victory: five more German airships were destroyed by Home Defence B.E.2c interceptors between October and December 1916.

The performance of the B.E.2 was inadequate to intercept the aeroplane raiders of 1917/18, and it was replaced by later types of night fighter, using techniques pioneered by the B.E.2c.

Thereafter the surviving B.E.2s (mainly B.E.2es) were used as trainers. In spite of the type's stability it was capable of comprehensive (if somewhat stately) aerobatics, and was by no means as bad a trainer as might have been expected.

* B.E.2: prewar version - important pioneer tractor biplane
* B.E.2a: built in small numbers from late 1912 - still a standard type at the outbreak of war in late 1914
* B.E.2b: basically the same as the "a" with higher sides to the cockpits, late examples used ailerons instead of wing warping
* B.E.2c: extensively redesigned - really a new aeroplane. The most produced version 1914-1916
* B.E.2d: essentially a "c" variant with a larger gravity fuel tank
* B.E.2e: the final version, with new wings. Expected to be a great improvement on the "c", it was a major disappointment. Nicknamed the "Quirk".