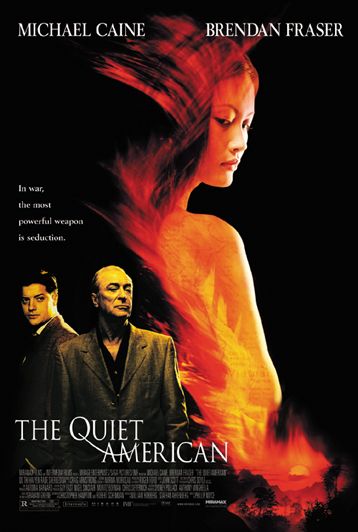 The 2002 version of "The Quiet American", in contrast to the 1958 version, depicted Greene's original ending and treatment of the principal American character, Pyle. Like the novel, the film illustrates Pyle's moral culpability in fostering intrigue within the South Vietnamese government. Going beyond Greene's original work, the film used a montage ending with superimposed images of American soldiers from the intervening decades of the .

The film was a commercial success in the . had paid $5.5 million for the rights to distribute the film in North America and some other territories [http://query.nytimes.com/gst/fullpage.html?res=9C04E6D7173DF934A25753C1A9649C8B63&sec=&spon=&pagewanted=1] , and this film went on grossing US $12.9 million in limited theatrical release in the . The film was even nominated for one Academy Award: Best Actor for Michael Caine.

Set in the early 1950s in , , during the end of the , on one level "The Quiet American" is a love story about the triangle that develops between a British journalist in his fifties, a young American idealist and a Vietnamese girl, but on another level it is also about the political turmoil and growing American involvement that led to the . Fowler, who narrates the story, is involved in the war only as an observer, apart from one crucial instant. Pyle, who represents America and its policies in Vietnam, is a operative sent to steer the war according to America’s interests, and is passionately devoted to the ideas of , an American foreign policy theorist who said that what Vietnam needed was a “third player” to take the place of both the colonialists and the Vietnamese rebels and restore order. This third player was plainly meant to be America, and so Pyle sets about creating a “Third Force” against the Viet Minh by using a Vietnamese splinter group headed by corrupt militia leader General Thé (based on the actual ). His arming of The's militia with American weaponry leads to a series of terrorist bombings in Saigon. These bombings, dishonestly blamed on the Communists in order to further American outrage, kill a number of innocent people, including women and children. Meanwhile, Pyle has stolen Fowler’s Vietnamese mistress Phuong, promising her marriage and security, and when Fowler finds out about his involvement in the bombings, he makes one definitive action to seal all of their fates

, the novel upon which the movie is based
, the 1958 film adaptation