The Seeds of Death

The Seeds of Death

Although is solely credited as the story's author, series script editor rewrote Episodes 3 through 6 of the script, partially as he considered Hayles's original ending lackluster and unworkable but also because originally was to have been replaced by a new companion called Nik by this story, but then actor postponed his departure. Dicks was co-credited on the sleeve of the release for his writing duties on the serial.

Patrick Troughton does not appear in Episode 4 as he was on holiday when it was being recorded. A double stands in for him in some shots where the Doctor is seen unconscious on the floor.

*This story is the first story to feature Alan Bennion in the role of an Ice Lord, this one named Slaar. Bennion would return as the Ice Lords Izlyr in "" (1972) and Azaxyr in "" (1974).
*Sonny Caldinez, who played Slaar's second in command, is the only actor to appear as an Ice Warrior in all four televised "Doctor Who" stories to feature the Ice Warriors. Caldinez also appeared in "" as Kemel.
*Ronald Leigh-Hunt played Commander Radnor in this story. Leigh-Hunt would play Commander Stevenson in "" (1975).
*Steve Peters, who played an Ice Warrior, was billed simply as "Alien" in the "" listing for episode one, so as not to spoil the surprise of the Ice Warriors' appearance. 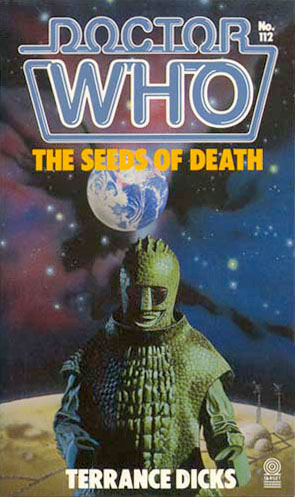 Episode 5 of "The Seeds of Death" exists both as a 16 mm film print and a 35 mm broadcast print.

"The Seeds of Death" was released on and in 1985 in an omnibus format (the first BBC Video release not to feature as the Doctor). The story was one of three omnibus releases that never had an episodic VHS re-release (the other two being and ).

In February 2003, an unedited remastered, d version was released on . The story was chosen to represent the Patrick Troughton era as part of the "Doctor Who" 40th Anniversary releases.

A novelisation of this serial, written by Dicks, was published by in July 1986.