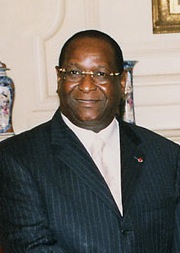 Lansana Kouyaté (born 1950) is a n diplomat and political figure who served as Prime Minister of Guinea from 2007 to 2008.

Kouyaté was born in Koba, . He studied administration at the before joining the . In 1976, he was appointed as Director of Labour, then the following year, moved to become Director of Trade, Prices and Statistics, where he had responsibility for state-owned companies. [http://62.210.150.98/lusaka/newslatf.asp?code=eng004651&dte=04/06/01]

In 1993, he was appointed as the Deputy Special Representative of the Secretary-General in for the mission, then in February 1994 became the Acting Representative. [http://www.un.org/Depts/DPKO/Missions/unosom2b.htm] In June 1994, he became the Assistant Secretary-General in the UN Department of Political Affairs, [http://www.un.org/ecosocdev/geninfo/afrec/vol11no3/watch.htm] one of his first missions being a tour around ECOWAS member states to discuss the situation in . He continued his involvement in discussions to build regional support for a resolution of the . [http://www.un.org/Depts/dpko/dpko/co_mission/unomilFT.htm] He left this job in September 1997 to become the Executive Secretary of the (ECOWAS), a post he held until February 2002.

On , a decree restructuring ministries increased the powers of the Secretary-General of the Presidency at the expense of those of the Prime Minister, and on Conté dismissed and replaced , the Minister of Communication and Government Spokesman, without consulting Kouyaté. On , Kouyaté demanded that Morel be restored to his position and said that he would not sit at the Council of Ministers with Morel's replacement. Labor unions announced plans to begin a new "unlimited general strike" on , demanding that Conté's agreement with the unions be properly implemented and that Morel be restored. [ [http://www.jeuneafrique.com/fluxafp/fil_info.asp?art_cle=41779 "Tensions en Guinée: préavis de grève générale à partir du 10 janvier"] , AFP (Jeuneafrique.com), January 4, 2008 fr icon.] Kouyaté's government chose to attempt to resolve the situation through dialogue with Conté in hopes of maintaining peace. [ [http://www.afriquenligne.fr/actualites/politique/guinee%3a-le-gouvernement-privilegie-la-concertation-avec-conte-2008010514499/ "Guinée: Le gouvernement privilégie la concertation avec Conté"] , Panapress (afriquenligne.fr), January 5, 2008 fr icon.] On , the unions withdrew their call for a strike. [ [http://www.jeuneafrique.com/fluxafp/fil_info.asp?art_cle=41906 "Guinée: mot d'ordre de grève générale levé, selon un syndicaliste"] , AFP (Jeuneafrique.com), January 9, 2008 fr icon.]

Tensions between Kouyaté and Conté increased over the decision by Kouyaté's government to repatriate Chantal Cole, Conté's advisor in charge of communications at the presidential palace, to France; in addition, they disagreed over Kouyaté's decision to allow Libyans to manage luxury hotels. [ [http://apanews.net/apa.php?page=show_article_eng&id_article=64226 "Guinean Prime Minister removed from office"] , African Press Agency, May 20, 2008.]

Kouyaté was widely considered a disappointment in his role as Prime Minister, and his unpopularity meant that his dismissal was not greeted with major unrest of the kind that led to his appointment a year earlier; in particular, his time in office was associated with rising food prices, deepening the country's economic problems. He was also accused of having presidential ambitions. Because he had not consulted with the opposition when forming his government and had not invited opposition politicians to participate in it, the opposition welcomed his dismissal and urged Souaré to avoid his mistakes. The Secretary-General of the (UFDG), Amadou Oury Bah, described Kouyaté as "a danger to the democratic process". [ [http://www.jeuneafrique.com/pays/guinee/article_depeche.asp?art_cle=AFP82428limogetnett0 "Limogeage de Lansana Kouyaté, syndicats et opposition dans l'attente"] , AFP (Jeuneafrique.com), May 21, 2008 fr icon.] One union leader, Rabiatou Serah Diallo, said that until the composition of Souaré's government was announced, she had nothing to say.

Many soldiers, dissatisfied over their failure to receive wage arrears, were unhappy with Kouyaté's dismissal, feeling that it left them with no one to whom they could address their grievances. On , unrest broke out among the soldiers as they demanded their wage arrears. [ [http://www.int.iol.co.za/index.php?set_id=1&click_id=86&art_id=nw20080528150242534C407099 "Angry soldiers embark on rampage in Guinea"] , Sapa-AFP, May 28, 2008.]