Party leaders of the United States House of Representatives

Party leaders of the United States House of Representatives 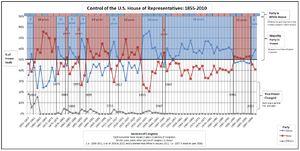 Party leaders of the United States House of Representatives are elected by their respective parties in a closed-door caucus by secret ballot and are also known as floor leaders.[4] The U.S. House of Representatives does not officially use the term "Minority Leader", although the media frequently does. The House instead uses the terms "Republican Leader" or "Democratic Leader" depending on which party holds a minority of seats.

Unlike in Westminster style legislatures, as well as in the case of the Senate Majority Leader, the House Majority Leader is subordinate to the Speaker of the House, who is by tradition the actual head of the majority party in the House of Representatives, although the Speaker usually does not participate in debate and rarely votes on the floor. In some cases, though, Majority Leaders have been more influential than the Speaker.[5]

The floor leaders and whips of each party are elected by their respective parties in a closed-door caucus by secret ballot.[citation needed] The Speaker-elect is also chosen in a closed-door session although they are formally installed in their position by a public vote when Congress reconvenes.[4]

By contrast, Party leaders of the United States Senate have often ascended to their position despite relatively few years of experience in that chamber,[citation needed] such as Lyndon B. Johnson, William F. Knowland, and Bill Frist. Current House Majority Leader Eric Cantor also had a comparatively quick rise to his current post.

Before 1899, the majority party floor leader had traditionally been the Chairman of the House Ways and Means Committee, the most powerful committee in the House, as it generates the Bills of Revenue specified in the Constitution as the House's unique power.[6]

The office of Majority Leader was created in 1899 by Speaker David B. Henderson for Sereno Payne.[citation needed] Henderson saw a need for a party leader on the House floor separate from the Speaker, as the role of Speaker had become more prominent, and the size of the House had grown from 105 at the beginning of the century to 356.

Starting with Republican Nicholas Longworth in 1925, and continued through the Democrats' control of the House from 1931–95, save for Republican majorities in 1947–49 and 1953–55, all majority leaders have directly ascended to the Speakership brought upon by the retirement of the incumbent. The only exceptions during this period were Charles A. Halleck who became Republican House leader and Minority Leader from 1959–65, Hale Boggs who died in a plane crash, and Dick Gephardt who became the Democrats' House leader but as Minority Leader since his party lost control in the 1994 midterm elections. Since 1995, the only Majority Leader to become Speaker is John Boehner, though indirectly as his party lost control in the 2006 midterms elections. He subsequently served as Republican House leader and Minority Leader from 2007-2011 and then was elected Speaker when the House reconvened in 2011. In 1998, with Speaker Newt Gingrich announcing his resignation, both Majority Leader Dick Armey and Majority Whip Tom DeLay did not contest the Speakership which eventually went to Chief Deputy Whip Dennis Hastert.

While the Speaker has long been the de facto party leader in the House, there have been some exceptions. In 1995, Speaker Newt Gingrich delegated the day-to-day House operations to Majority Leader Dick Armey,[citation needed] leaving Gingrich free to travel the country to rally support for his Contract with America agenda. Majority Leader Tom Delay generally overshadowed Speaker Dennis Hastert from 2003-2006.[7]

When the Presidency and both Houses of Congress are controlled by one party, the Speaker normally takes a low profile and defers to the President.[citation needed] For that situation the House Minority Leader can play the role of a de facto "leader of the opposition", often more so than the Senate Minority Leader, due to the more partisan nature of the House and the greater role of leadership.