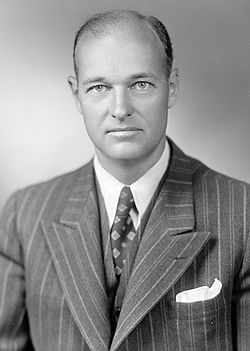 George F. Kennan in 1947, the year the X Article was published.

The X Article, formally titled The Sources of Soviet Conduct, was published in Foreign Affairs magazine in July 1947. The article was written by George F. Kennan, the Deputy Chief of Mission of the United States to the USSR, from 1944 to 1946, under ambassador W. Averell Harriman.

G. F. Kennan had been stationed at the U.S. Embassy in Moscow as minister-counselor since 1944. Although highly critical of the Soviet system, the mood within the U.S. State Department was friendship towards the Soviets, since they were an important ally in the war against Nazi Germany.

In February 1946, the United States Treasury asked the U.S. Embassy in Moscow why the Soviets were not supporting the newly-created World Bank and the International Monetary Fund. In reply, Kennan wrote the Long Telegram outlining his opinions and views of the Soviets; it arrived in Washington on February 22, 1946. Among its most-remembered parts was that while Soviet power was impervious to the logic of reason, it was highly sensitive to the logic of force.

In writing the Long Telegram, his reply to the U.S. Treasury Department, Kennan was profoundly aware of the matters at stake; its preface says:

Answer to Dept’s 284, Feb. 3,13 involves questions so intricate, so delicate, so strange to our form of thought, and so important to analysis of our international environment that I cannot compress answers into single brief message without yielding to what I feel would be a dangerous degree of oversimplification. I hope, therefore, Dept will bear with me if I submit in answer to this question five parts...I apologize in advance for this burdening of telegraphic channel; but questions involved are of such urgent importance, particularly in view of recent events, that our answers to them, if they deserve attention at all, seem to me to deserve it at once.[1]

Kennan described dealing with Soviet Communism as “undoubtedly greatest task our diplomacy has ever faced and probably greatest it will ever have to face”. In the first two sections, he posited concepts that became the foundation of American Cold War policy:

According to Kennan, the Soviet Union did not see the possibility for long-term peaceful coexistence with the capitalist world. It was its ever-present aim to advance the socialist cause. Capitalism was a menace to the ideals of socialism, and capitalists could not be trusted or allowed to influence the Soviet people. Outright conflict was never considered a desirable avenue for the propagation of the Soviet cause, but their eyes and ears were always open for the opportunity to take advantage of “diseased tissue” anywhere in the world.

In Section Five, Kennan exposited Soviet weaknesses and proposed U.S. strategy, stating that despite the great challenge, “my conviction that problem is within our power to solve—and that without recourse to any general military conflict.” He argued that the Soviet Union would be sensitive to force, that the Soviets were weak, compared to the united Western world, that the Soviets were vulnerable to internal instability, and that Soviet propaganda was primarily negative and destructive. Kennan advocated sound appraisal, public education, solutions of the internal problems of U.S. society, proposing for other nations a positive picture of the world the U.S. would like to see, and faith in the superiority of the Western way of life over the collective ideals of Soviet Communists.

In July 1946, President Truman enlisted the services of one of his senior advisers, Clark Clifford, to prepare a report on Soviet relations that would provide detail on Soviet disregard for post-war agreements. The President, who was growing frustrated by Soviet actions, wanted “to be ready to reveal to the whole world the full truth about the Russian failure to honor agreements.”[2] With the assistance of George Elsey, Clifford set out to write a report that would take the analysis of the Long Telegram and translate it into concrete policy recommendations. The pair solicited the input of senior officials in the Departments of State, War, and Justice, the Joint Chiefs of Staff, and the Central Intelligence Group, and utilized the expertise of George Kennan and Charles Bohlen in writing their report.

The final report, entitled American Relations with the Soviet Union, was presented solely to the President on September 24, 1946, and it did not circulate beyond his desk. In fact, President Truman ordered that all copies of the report be delivered to him because the report was of great value to him “but if it leaked, it would blow the roof off the White House...we’d have the most serious situation on our hands that has yet occurred in my Administration.” The report would remain top secret and un-circulated until it appeared in Arthur Krock’s Memoirs in 1968.[2]

The report provided Truman with the background of wartime relations with the Soviet Union, insight into existing agreements, and most important, detail on Soviet violations of agreements with the United States. It also stressed the importance of a well-informed public because “only a well-informed public will support the stern policies which Soviet activities make imperative”.[3]

The first mention of the concept of “restraining and confining” the Soviet influence appeared in the Clifford-Elsey Report.

Origin of the article

The Sources of Soviet Conduct began as a private report prepared for Secretary of Defense James Forrestal in January 1947.[4] It was never intended as a public document, but on the urging of Hamilton Fish Armstrong, editor of Foreign Affairs, Kennan obtained permission from Forrestal to publish the article under the pseudonym “X”.[4] When published, the article was not intended to be a statement of the government’s official views of the Soviet situation. But when it was revealed that the author was George Kennan, the connection to official policy was made and some high ranking officials, including Secretary of State George C. Marshall, questioned the approval for the publication.[4][5]

Kennan was heavily involved in the evolution of US policy toward the Soviet Union following World War II. Both his writing of the Long Telegram and his input into the Clifford-Elsey Report factored into the content of the article. When he wrote the Long Telegram, it was a review of the facts of how the Soviet Union saw the world. The Clifford-Elsey Report took those facts and interpreted how they affected the world and what the US should do about it. The X Article took the information presented in the two prior reports and constructed a road map for the Cold War. The article proved to be the public face of American foreign policy in the Cold War — even though Kennan himself has noted that he felt that he was misunderstood — in the statement that the “United States policy toward the Soviet Union must be that of a long-term, patient but firm and vigilant containment of Russian expansive tendencies.”[4][5]

This policy was misinterpreted to mean that the US would contain the Soviet Union globally. Much of the meaning that was interpreted from the article, even within the government, was not the true meaning that Kennan intended. He admitted that there were serious deficiencies in the article and he was afflicted with ulcers over the response that the article received.[6]