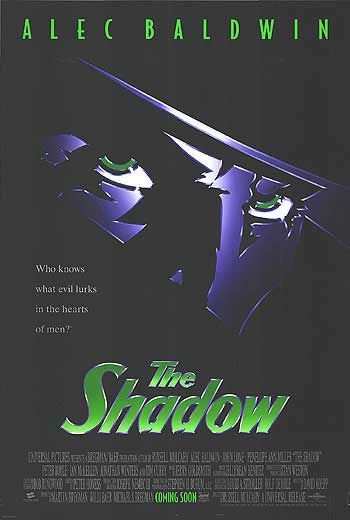 "The Shadow" is a 1994 , directed by , and based on the character of the same name created by in 1931. starred in the title role. The film is one of many featuring The Shadow, but it is the most expensive of those productions, with an estimated $40 million budget.

The film was meant to be a summer blockbuster and the starting point for a new movie franchise with toy and clothing lines. But critics and fans panned the movie, and it flopped. The planned franchise never materialized, although some toys were offered during its release period.

Lamont Cranston () is a former American soldier, and a veteran of . Tired of being a servant to greater powers, Cranston disappears following the armistice and hides himself away in , eventually rising to power as an iron-fisted producer and warlord named Yin-ko. Living his life in opulence, Yin-ko sees little reason for reform, controlling the majority of the country's opium fields and casually using brutal violence to achieve and maintain his power. One night he is kidnapped from his chambers by unknown assailants, who spirit him away from his estate and bring him before the . The Tulku, who is clearly much more than a simple holy man, confronts Yin-ko and reveals to him that he knows his true identity as Lamont Cranston. He tells Cranston that he had him brought to the temple so that he could learn to overcome the darkness in his heart in order to become a force for good. Cranston's objections are quickly silenced by a run-in with the , a living knife animated by the Tulku's mental abilities, and so begins Cranston's reluctant tutelage under the powerful mystic. For seven years, Cranston is taught to "cloud men's minds", which permits him to control or alter people's perceptions and thoughts by force of concentration. His most apparent use of this power allows him to become invisible, removing himself from people's vision in every part except for his shadow, the only thing he can never hide.

With his newfound abilities, Cranston returns to the , where he resumes the life he had before the war as an opulent playboy. His alter ego, The Shadow, terrorizes the criminal element of the city and is regarded by the public as an urban legend. He utilizes a vast network of spies and agents, identified by their rings, recruited from the various citizens he saves which affords him a large talent pool to draw from should he require their expertise or knowledge. His activities go as planned until Shiwan Khan (), the last living descendant of , enters the country with his infamous ancestor's holy crypt, arriving inside the Natural History museum. Khan, a fellow student of the Tulku, exhibits psychic powers even more focused than Cranston's, but was not brought over to the side of good before he left the Tulku. Able to hypnotize others into doing his bidding, Khan is able to mull along secretly until he decides to reveal himself to The Shadow. Khan, an admirer of Cranston's previous atrocities as Yin-ko, wishes to let Cranston in on his forthcoming plans to complete Genghis Khan's global domination and once again allow his darker nature to rule him. The Shadow is tempted but rejects Khan's offer. Cranston meets and is immediately intrigued by Margo Lane, a wealthy socialite, who seems to have suppressed mental abilities. He cannot allow himself to interact with her, however, because she has the ability to read his thoughts without apparent effort and is immune to his hypnosis. Her father Reinhardt, a scientist working for the war department, ends up missing as his implosion device is key to Khan's plan. When she goes to find him she is mesmerized by Khan's stronger power and is sent to kill The Shadow in his mansion. When Cranston confronts her and releases her from Khan's control, she realizes that he is in fact The Shadow. In their next encounter, Khan tells Cranston that he sent Margo not to kill him but to be killed by him, so that his instincts would reawaken and Cranston would go back to his corrupt persona.

With Reinhardt's implosion device in hand, Khan acquires the final piece of his plan: a beryllium sphere from Farley Claymore, Reinhardt's unscrupulous assistant. Claymore actually joined Khan by his own free will in exchange for power in the new world order, and with the two devices Khan has the ability to create an atomic weapon (a decade before the ). The Shadow infiltrates Khan's headquarters, a massive hotel that he actually kept invisible to the entire population of New York, just as the atomic bomb is given two hours to detonate. He kills Farley Claymore and makes his way to Khan, but when he engages him Khan's control over his powers proves to be sharper. Using the Phurba, Khan cuts away at The Shadow until he begins to lose his concentration and reverts to Lamont Cranston. Unable to keep his powers from fading. Cranston struggles with the Phurba amidst Khan's condescensions until he is forced to regain control, overpowering the Phurba and sending it into Khan's torso.

With his concentration broken, Khan's hypnotic control over his building and underlings fails, revealing the once-invisible hotel to the surprised New York populace. Reinhardt Lane, now free, helps his daughter disarm the atomic weapon while The Shadow pursues Khan. The Shadow chases him into the subsections of the building where, among a maze of mirrors, he uses his psychic powers to tear apart the glass and send a large shard into Khan's forehead. When Khan awakes he finds himself in a mental hospital, stripped of his abilities due to a life-saving lobotomy that apparently removed the usually-dormant part of the brain that granted him his hypnotic skills. When the attending doctor explains the situation to a frustrated and bewildered Khan, the fire opal ring on his finger reveals him to be an agent of The Shadow.

Producer bought the rights to "The Shadow" in 1982. Screenwriter had listened to "The Shadow" radio show as a child when radio re-ran it on Sunday nights. He was hired in 1990 to write a new draft and was able to find the right tone that the studio liked.

He usually didn’t write with an actor in mind, but early on envisioned Alec Baldwin as Lamont Cranston/the Shadow. Koepp also sat in on rehearsals and incorporated a lot of the actor’s humor into the script.

While making "" in 1984, director heard that Bregman had the rights to "The Shadow", but didn’t seriously pursue it when he heard that might direct. While working on a film called "Blue Ice" for Bregman, he found out that no director was attached to "The Shadow" film. He asked the producer about it and Bregman agreed to have him direct.Fact|date=March 2008 While working on the Bregman-produced "", the film’s star, , recommended her then-husband, Baldwin, to star in "The Shadow".Fact|date=March 2008 According to Bregman, very few actors were considered for the role. Over the years, both and were suggested.Fact|date=March 2008

The film was shot on the Universal backlot in Hollywood on five soundstages over 60 days with a five day mini-unit tour of location shooting and a week lost when an earthquake destroyed the Hall of Mirrors set.

Mulcahy said, “There are a lot of FX in this film, but it’s not an FX film. It’s a character/story-driven film. The FX are part of the story.”

According to visual effects supervisor Alison Savitch, the film originally was intended not to be an effects movie.Fact|date=March 2008 They planned to have only 50 to 70 shots. By the time the film was completed, they had 230 effects shots. This included creating 1930s New York City through miniatures and matte paintings.Fact|date=March 2008

While making the film, Mulcahy mentioned that a sequel might feature the Voodoo Master as the villain.Fact|date=January 2008

The film received a 31% on "", with the consensus as "Visually impressive, but ultimately forgettable." The more detailed summary described the story as having "impressive" visuals and a story that does not "strike a memorable chord." [" [http://www.rottentomatoes.com/m/1054125-shadow/ The Shadow (1994)] ." "".]

A Shadow video game was developed to tie in with the 1994 movie, but was never released.

Midway (under the "" label) released a Shadow themed pinball machine in 1994. Brian Eddy ("", "") designed the game. It was his first pinball game design and was moderately successful. composed original music for the game.

The label released a soundtrack album in 1994. The soundtrack featured selections from 's score and other songs from the film.