Mono Lake (pronounced /ˈmoʊnoʊ/ moh-noh) is a large, shallow saline lake in Mono County, California, formed at least 760,000 years ago as a terminal lake in a basin that has no outlet to the ocean. Because it lacks an outlet, dissolved salts make the lake very alkaline and saline.

This desert lake has an unusually productive ecosystem based on brine shrimp that thrive in its waters, and provides critical nesting habitat for two million annual migratory birds that feed on the shrimp.[2][3] Mono Lake is also notable for containing GFAJ-1, a rod-shaped extremophilic species of bacteria that may be capable of metabolizing the usually poisonous element arsenic.[4]

The human history of Mono Lake is associated with its productive ecosystem. The native Kutzadika'a people derived nutrition from the larvae of the alkaline flies that live in the lake. When the city of Los Angeles diverted water from flowing into the lake, it lowered the lake level, which imperiled the migratory birds. The Mono Lake Committee formed in response, winning a legal battle that forced Los Angeles to partially restore the lake level. 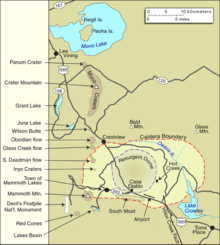 Mono Lake formed because it lies in the Mono Basin, an endorheic basin that has no outlet to the ocean. Dissolved salts in the runoff thus remain in the lake and raise the water's pH levels and salt concentration. The tributaries of Mono Lake include Lee Vining Creek, Rush Creek and Mill Creek which flows through Lundy Canyon.[5]

From 4.5 to 2.6 million years ago, large volumes of basalt were erupted around what is now Cowtrack Mountain (east and south of Mono Basin); eventually covering 300 square miles (780 km2) and reaching a maximum thickness of 600 feet (180 m).[6] Later volcanism in the area occurred 3.8 million to 250,000 years ago.[7] This activity was northwest of Mono Basin and included the formation of Aurora Crater, Beauty Peak, Cedar Hill (later an island in the highest stands of Mono Lake), and Mount Hicks.

Mono Lake is believed to have formed at least 760,000 years ago, dating back to the Long Valley eruption. Sediments located below the ash layer hint that Mono Lake could be a remnant of a larger and older lake that once covered a large part of Nevada and Utah, which would put it among the oldest lakes in North America. At its height during the most recent ice age, the lake may have been 900 feet (270 m) deep.[8] Prominent old shore lines, called strandlines by geologists, can be seen above Lee Vining and along volcanic hills northeast of the current lake.

Currently, Mono Lake is in a geologically active area at the north end of the Mono–Inyo Craters volcanic chain and is close to Long Valley Caldera. Volcanic activity continues in the Mono Lake vicinity: the most recent eruption occurred 350 years ago, resulting in the formation of Paoha Island. Panum Crater (on the south shore of the lake) is an excellent example of a combined rhyolite dome and cinder cone. 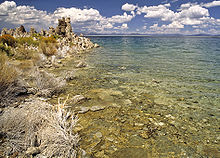 The limnology of the lake shows it contains approximately 280 million tons of dissolved salts, with the salinity varying depending upon the amount of water in the lake at any given time. Before 1941, average salinity was approximately 50 grams per liter (g/l) (compared to a value of 31.5 g/l for the world's oceans). In January 1982, when the lake reached its lowest level of 6,372 feet (1,942 m), the salinity had nearly doubled to 99 g/l. In 2002, it was measured at 78 g/l and is expected to stabilize at an average 69 g/l as the lake replenishes over the next 20 years.[9]

An important, and unintentional, consequence of ending the water diversions was the onset of a period of "meromixis" in Mono Lake.[10] In the time prior to this, Mono Lake was typically "monomictic"; which means that at least once each year the deeper waters and the shallower waters of the lake mixed thoroughly, thus bringing oxygen and other nutrients to the deep waters. In meromictic lakes, the deeper waters do not undergo this mixing; the deeper layers are more saline than the water near the surface, and are typically nearly devoid of oxygen. As a result, becoming meromictic greatly changes a lake's ecology.

Mono Lake has experienced meromictic periods in the past; this most recent episode of meromixis, brought on by the end of the water diversions, commenced in 1994 and had ended by 2004.[11]

The hypersalinity and high alkalinity (pH=10 or equivalent to 4 milligrams of NaOH per liter of water) of the lake means that no fish are native to the lake.[12] An attempt by the California Department of Fish and Game to stock the lake failed.

The lake is famous for the Mono Lake brine shrimp, Artemia monica, a tiny species of brine shrimp, no bigger than a thumbnail, that are endemic. During the warmer summer months, an estimated 4-6 trillion brine shrimp inhabit the lake. Brine shrimp have no food value for humans, but are a staple for birds of the region. The brine shrimp feed on microscopic planktonic algae which reproduce rapidly during winter and early spring after winter runoff brings nutrients to the surface layer of water.

The whole food chain of the lake is based on the high population of single-celled algae present in the warm shallow waters. By March the lake is "as green as pea soup" with photosynthesizing algae.[13] Alkali flies, Ephydra hians live along the shores of the lake and walk underwater encased in small air bubbles for grazing and to lay eggs. These flies are an important source of food for migratory and nesting birds.

Mono Lake is a vital resting and eating stop for migratory shorebirds and has been recognized as a site of international importance by the Western Hemisphere Shorebird Reserve Network.[14] Nearly 2,000,000 waterbirds, including 35 species of shorebirds, use Mono Lake to rest and eat for at least part of the year. Some shorebirds that depend on the resources of Mono Lake include American avocets, killdeer and sandpipers. Over 1.5 million eared grebes and phalaropes use Mono Lake during their long migrations.

Late every summer tens of thousands of Wilson's phalaropes and red-necked phalaropes arrive from their nesting grounds, and feed until they continue their migration to South America or the tropical oceans respectively.[2]

In addition to migratory birds, a few species spend several months to nest at Mono Lake. Mono Lake is the second largest nesting population of California gulls, Larus californicus, second only to the Great Salt Lake in Utah. Since abandoning the landbridged Negit Island in the late 1970s, California gulls have moved to some nearby islets and have established new, if less protected, nesting sites. Cornell University and Point Reyes Bird Observatory have continued the study of nesting populations on Mono Lake that was begun over 20 years ago. Snowy Plovers also arrive at Mono Lake each spring to nest along the remote eastern shores.

On December 2, 2010, NASA announced the discovery of an organism in Mono Lake, named GFAJ-1, that utilizes arsenic in its cellular structure.[15] This would constitute the first discovery of a life form capable of replacing one of the six essential elements (carbon, hydrogen, oxygen, nitrogen, sulfur and phosphorus) in its biomolecules.[16][17][18]

The early indigenous people of Mono Lake were called the Kutzadika'a, who were the Native American band of Northern Paiutes.[19] They spoke the Northern Paiute language.[20] The Kutzadika'a foraged alkali fly larvae, called kutsavi in their language.[21] Mono Lake was also referred to as Teniega Bah. The origin of the name "Kutzadika'a" is uncertain but could be a Yokut Native American term for "fly eater".

The term "Mono" came from "Monachi", a Yokut term for the tribes that lived on both the east and west side of the Sierra Nevada.[22]

During early contact the first known Mono Lake Paiute chief was Captain John. He was also referred to by the Paiute names of Shibana or Poko Tucket. Captain John was the son of a Northern Paiute named 'older Captain John.'

In order to provide water needs for the growing City of Los Angeles, water was diverted from the Owens River into the Los Angeles Aqueduct in 1913. In 1941 the Los Angeles Department of Water and Power extended the Los Angeles Aqueduct system farther upriver into the Mono Basin. So much water was diverted that evaporation soon exceeded inflow and the surface level of Mono Lake fell rapidly. By 1982 the lake was reduced to 37,688 acres (15,251.8 ha) having lost 31 percent of its 1941 surface area. As a result alkaline sands and once-submerged tufa towers became exposed and Negit Island became landbridged, exposing the nests of gulls to predators (chiefly coyotes) and forcing the breeding colony to abandon the site.

In 1974, Stanford University graduate student David Gaines studied the Mono Lake ecosystem and was instrumental in alerting the public of the effects of the lower water level.[24] The National Science Foundation funded the first comprehensive ecological study of Mono Lake, conducted by Gaines and undergraduate students from UC Davis, UC Santa Cruz, and Earlham College. In June 1977 the UC Davis Institute of Ecology published their report, "An Ecological Study of Mono Lake, California," which alerted California to the ecological dangers posed by the redirection of water away from the lake for municipal uses.[24]

Gaines formed the Mono Lake Committee in 1978. He and Sally Judy, a UC Davis student, led the committee and pursued an informational tour of California. They joined with the Audubon Society to fight a now famous court battle, the National Audubon Society v. Superior Court, to protect Mono Lake through state public trust laws.[24] While these efforts have resulted in positive change, the surface level is still below historic levels and exposed shorelines are a source of significant alkali dust during periods of high wind.

Owens Lake, the once navigable terminus of the Owens River which had sustained a healthy ecosystem, is now a dry lake bed during dry years due to water diversion beginning in the 1920s. Mono Lake was spared this fate when the California State Water Resources Control Board issued an order to protect Mono Lake and its tributary streams on September 28, 1994. Since that time, the lake level has steadily risen. In 1941 the surface level was at 6,417 feet (1,956 m) above sea level and as of August 2006 it was at 6,385 feet (1,946 m).[25] As of May 2011, Mono Lake is at 6382.5 feet above sea level and is projected to rise 1.6 feet by September in response to the heavy snowpack in the mountains this year. The lake level of 6,392 feet (1,948 m) above sea level is the goal, a goal made more difficult during years of drought in the American West.