Lake Van ( _tr. Van Gölü, _ku. Gola Wanê, _hy. Վանա լիճ, _fa. Daryacheye Van ("Lake of Van")) is the largest in , located in the far east of the country. It is a saline and soda lake, receiving water from numerous small streams that descend from the surrounding mountains. Lake Van is one of the world's largest s (having no outlet). The original outlet from the basin was blocked by an ancient volcanic eruption.

The lake water is strongly ( 9.7–9.8) and rich in and other s, which are extracted by evaporation and used as s.Fact|date=November 2007 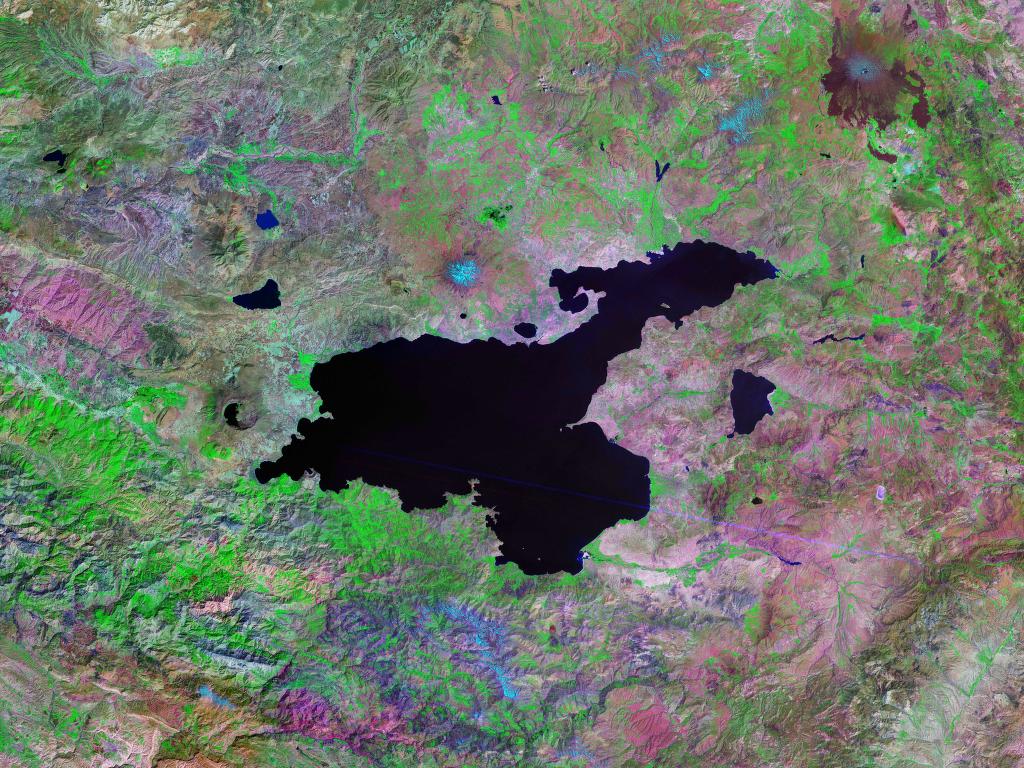 left|thumb|270px|right|Lake_Van_ photo] The lake's outlet was blocked at some time during the , when from Nemrut volcano blocked westward outflow towards the Muş Plain. Now dormant, Nemrut Dağı is close to the western shore of the lake, and another dormant , Süphan Dağı dominates the northern side of the lake.

The water level of the lake has often altered dramatically: near Tatvan, Oswald (see Geology of Armenia, 1901) noted a raised beach high above the present level of the lake as well as recently drowned trees. Investigation by Degens and others in the early 1980s determined that the highest lake levels (72m above the current height) had been during the last ice age, about 18,000 years ago. About 9,500 years ago there was a dramatic drop to more than 300m below the present level. This was followed by an equally dramatic rise around 6,500 years ago.

Similar but smaller fluctuations have been seen recently. The level of the lake rose by at least three metres during the 1990s, drowning much agricultural land, and (after a brief period of stability and then retreat) seems to be rising again. The level has risen about two meters in the ten years immediatey prior to 2004.

As a deep lake with no outlet, Lake Van has accumulated great amounts of sediment washed in from surrounding plains and valleys, and occasionally deposited as ash from eruptions of nearby volcanoes. This layer of sediment is estimated to be up to 400m thick in places, and has attracted climatologists and vulcanologists interested in drilling cores to examine the layered sediments.

In 1989 and 1990, an international team of geologists led by Dr. Stephan Kempe from the University of Hamburg (now Professor at the Technische Universität Darmstadt) retrieved ten sediment cores from depths up to convert|446|m|ft|0|abbr=on. Although these cores only penetrated the first few meters of sediment, they provided sufficient to give climate data for up to 14,570 years BP.

A team of scientists headed by palaeontologist Professor Thomas Litt at the has applied for funding from the (ICDP) for a new, deeper drilling project to examine the lake's sediments. Litt expects to find that "Lake Van stores the climate history of the last 800,000 years—an incomparable treasure house of data which we want to tap for at least the last 500,000 years."

The only known to live in the of Lake Van is "" the Pearl Mullet or "inci kefalı", [ [http://www.springerlink.com/content/p4050j7u81790t3k/ Journal; Fish Physiology and Biochemistry] ] a fish related to and , which is caught during the spring floods. In May and June, these fish migrate from the lake to less alkaline water, spawning either near the mouths of the rivers feeding the lake or in the rivers themselves. After spawning season it returns to the lake. [ [http://www.incikefali.net/ozet-en.htm Inci kefali summary] ]

In 1991, researchers reported the discovery of convert|40|m|ft|0|abbr=on tall microbialites in Lake Van. These are solid towers on the lake bed created by mats of coccoid ("" group) that create in combination with precipitating out of the lake water.

The Lake Van region is the home of the rare breed of , noted for among other things its unusual fascination with water.

Since about 1995 there have been reported sightings of a 'Lake Van monster' about convert|15|m|ft|0 in length named "Van Canavarı" ("Monster of Van").

The lake is surrounded by and grain-growing areas.

, the capital of , was located near the shores of Lake Van, on the site of what became medieval Van's castle, west of present-day Van city. [The Concise Encyclopædia of Archaeology - Page 488 by Leonard Cottrell - 1960] The ruins of the medieval city of Van are still visible below the southern slopes of the rock on which is located.

In the second half of the 11th century the situation on the southeast border of the Byzantine empire had reached such a point that Emperor launched a campaign to re-conquer Armenia and head off growing Seljuk control. Diogenes and his large army crossed the and confronted a much smaller Seljuk force led by at the , north of Lake Van on . Despite their greater numbers, the cumbersome Byzantine force was defeated by the more mobile Turkish horsemen and Diogenes was captured.

Alp Arslan divided the conquered eastern portions of the Byzantine empire among his Turcoman generals, with each ruled as a hereditary , under overall sovereignty of the . Alp Arslan gave the region around Lake Van to his commander Sökmen el Kutbî (literally "Sökmen the Slave"), who set up his capital at Ahlat on the western side of the lake. The dynasty of (also known as "Sökmenler") ruled this area from 1085 to 1192.

The Ahlatshahs were succeeded by the dynasty.

Near the and the southern shore, on lies the Church of the Holy Cross (Armenian: Սուրբ Խաչ, Surb Khach), which served as a royal church to the Armenian kingdom.

The railway connecting Turkey and built in the 1970s uses a across Lake Van between the cities and Van, rather than building railway tracks around the rugged shore line. Transfer from train to ship and back again limits the total carrying capacity.