ATV is a television station in Melbourne, Australia, part of Network Ten - one of the three major Australian commercial television networks. 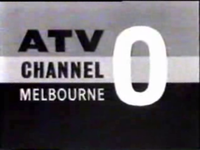 The licence to operate Melbourne's third commercial television station was awarded to transport magnate Sir Reginald Ansett's Austarama Television in April, 1963. The new channel, ATV-0 (pronounced as the letter O, never the number zero), began transmission on 1 August 1964 from a large, modern studio complex located in the then-outer eastern suburb of Nunawading,[2] in the locality now known as Forest Hill, but referred to at the time as East Burwood.

The new station opened with a preview program hosted by news presenters Barry McQueen and Nancy Cato. Reception difficulties in parts of the city resulted in the station's position as third in the television ratings.

ATV had been experimenting with colour transmissions since 1967, when the station was the first to mount a colour Outside Broadcast in Australia, from the Pakenham races.[3] Many other colour test transmissions occurred subsequently. Full time colour transmission was introduced to ATV-0 in March 1975 in line with other stations around the country.

Rupert Murdoch gained a controlling interest in ATV-0 and Sydney television station TEN-10 in 1979. As a result of interference and falling ratings, the station moved frequency and call-sign from ATV-0 to ATV-10 by January the next year, but had to obtain agreement from neighbouring Gippsland station GLV-10 to change its frequency to become GLV-8.

On January 20, 1980, the new ATV-10 was launched with a new jingle campaign ("You're on Top With Ten"), Graham Kennedy's introductory presentation and a 30-minute Eyewitness News, then anchored by Jana Wendt. By May, David Johnston became the new co-anchor, and Eyewitness News was back to its one-hour duration, proof that it was "First in Melbourne" for many years[citation needed] due to its many innovations and historic moments and the fact that this ATV being the first of the Network Ten stations to adopt the Eyewitness News brand and the one-hour newscast in the 1970s.

The 1986 transfer of Neighbours to ATV and the entire Network Ten (from the Seven Network) proved to be a success. ATV's Nunawading studios, aside from its suburban sets in Melbourne itself, were used to produce it. These venues still do this today.

On September 7, 1992, ATV-10 relocated from the station's famous Nunawading studios to the Como Centre in inner suburban South Yarra. The Nunawading complex is now operated by Global Television, Network Ten leases the facility for production of programs such as Neighbours while the Como studios in South Yarra are used for The Project & The Circle as well as news, current affairs, entertainment and sports programs.

ATV-0's first news presenter was its news director, Brian Wright, before Barry McQueen took over regular news presenting duties.[citation needed] The station's initial news format on weeknights was a 45-minute bulletin starting at 6.15pm, aimed at competing with the 30-minute bulletins offered by rival stations GTV-9 and HSV-7. The news format was changed a number of times, with the eventual adoption of the network's one-hour format in the early 1970s, and its take on the Eyewitness News format and brand in 1972, then anchored by Geoff Raymond.

The flagship weeknight bulletin was formerly presented by David Johnston, who was replaced by Mal Walden following his move to HSV-7 in 1996. Co-anchor Jennifer Hansen, who with Walden formed one of the longest-serving news duos in Australian television history, was replaced by Helen Kapalos in 2006.

Regular weekend bulletins from Melbourne were axed in the early 1990s in favour of a national bulletin from Sydney. However, localised editions of Ten Weekend News were reintroduced on Saturdays during the AFL and presented by George Donikian, followed by a localised edition of Sports Tonight for Victoria. Permanent weekend bulletins were reintroduced in January 2011 (alongside a short-lived 6:30pm bulletin on weeknights) but discontinued ten months later.