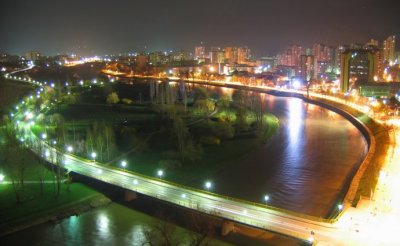 Zenica (: Зеница) is an industrial city in . It is the capital of the of the entity. Zenica is located about convert|70|km|mi|0|abbr=on north of and is situated on the Bosna river, surrounded by mountains and hills.

The town's Stara čaršija (old quarter) contains several attractions, including a , which is now the City Museum and Art Gallery. There is also a (Čaršijska mosque), an Austrian fountain and an old bey's farm house (Hadžimazića House). Today Barracks of the is also based in Zenica within the peace-keeping activities of European forces in the country.

The urban part of today's Zenica was formed during several specific periods which can be chronologically dated to the time of Neolithic community, Illyrian old towns ruins, Roman Municipium "Bistua Nova", and the most important archaeological find, an II to IV century AD, Early Christian double Basilica; there is only one more like it identified so far in the whole of Europe. Ruins of an ancient settlement were found not far from Bilimišce (part of the town on the south-eastern side) in the villages of Putovici and Tišina, with objects like Villa Rustica, baths, Pagan temples and a variety of different structures which dominated the scenery of the environment.

The age of independence of the medieval is directly connected with Zenica, above all with the stone table of the Grand Magistrate Gradiša and the rule of Bosnia by (Governor) in the second half of the XII century. An Act of Abjuration was sign in (where the city's football is today) by Kulin with the representatives of the Pope, and that action symbolized the end of an era. The Act determines the facts of the political powers of that time. The closeness to the stony fortress of Vranduk, then to the residence of the Kings of Bosnia at Bobovac and to the village Janjici where the Did, the High Priest of the Bosnian Church use to preside along with its Stecaks (type of a medieval tombstone founded only on the territory of Bosnia and Herzegovina and some parts of , and ) in the villages of Puhovac and Pojske and the local population with its clerks, writers and builders of that time, who had left their own mark in history, points to the facts and gives evidence of the special significance of this region in the Middle Ages. By its old names Bistua Nova, (Bilin's Field), Brod and finally Zenica from the 20th of March this town has remained connected to the central parts of the Bosnian State and stands in the middle of the river Bosna's flow.

Zenica is the place of origin of the Serbian dynasty that migrated in the 14th century to and would rule for over two centuries.

During the rule of the (1463-1878) and by the fact that the changes to the main trade road had reorganized the function of the town, except during a brief period until , when Zenica was the residence of Brod's Kadi (Ottoman judge, handles both religious and secular affairs of his subjects), Zenica was a small town with its own individual look and several mosques: Sultan Ahmet's, Osman Cheleby's, Seymen and Jali mosques, with a Madrassa (Islamic religious school), founded in and several lower primary schools, with interesting Ottoman tombstones, gardens, inns and several stopping inns for caravans. In one description from the year , Zenica is mentioned as a delta of , where melons grow and where the entire landscape is very pleasant. It is assumed that Zenica had 2.000 inhabitants at that time and all were mostly Bosniacs, while Serbs and Croats are mentioned in the documents at the end of XVIII century and in the XIX century Jews are also mentioned. The raids of have been marked as dark times which left a lot destruction and caused an exodus and after the year 1697, Zenica had started to stabilise and to distinguish itself in the administrative, urban, economical and topographical characteristics all of which have opened the paths to the prosperity that followed in the XX century. At the end of XIX century, during occupation, there were investments in capital projects that had wider social and economic importance, and were soon to become life and fate of Zenica. Those projects include a railroad from to Zenica built in 1879, Coal Mine b. in 1880, Paper Works b. in 1885, Steel Factory b. in 1892 and a Detention Facility b. in 1886, all of these investments caused a chain of changes in both the quality and quantity of city's development.

In the begging of the XX century, there was an urban boom and the official State Register for the year 1910 shows that for only a few years the number of population had increased to 7.215 inhabitants. It is evident that there is a huge urban acceleration. The Orthodox Church was built in 1882, two Catholic Churches in 1910, a Synagogue in 1903, several motels, hotel, school, plumbing system, modern road and etc. The Twentieth Century is marked by several interesting, typical and unusual manifestations, including increased industrialization especially after 1938 and the construction of the rough rail, pauperization of parts of the population, the rise of power of the working class and the mixture of Greater European understandings with the domestic Bosnian mentality and local customs. The city that has developed has different functions and purposes, especially after having to cope with the fact that it has a Detention Facility on one side of the town and a Steel Factory on the other. But is has also a valuable gift, the lives of its inhabitants are closely connected, the Stone Bridge binds the house of Kosta Jefic and Osmanaga Mehmedic along with the Jewish Synagogue for full ninety years.

and the preparation for the uprising, there was a struggle of the local population to survive and maintain its existence and respect, that can be seen in the famous Resolution of the Muslims of Zenica, which was sighed in May 1942 and the formation of its authentic symbol, a Muslim militia in the villages of Šerići, Doglodima, Babino and throughout rise of the partisan movements. All of these struggles had their own hard demands and burdens. That was the dimension of the resistance of Zenica, the town did not have greater damages, terror nor human causalities, which is the fact of first class importance and significance. It is regretful that the goals of the antifascist struggle collided with the ideological determination, which had some dire and unexpected consequences in the aftermath of the war.

The most prominent growth of Zenica started after the partisans liberated the small town in 1945 and began to develop the steel industry. During those years new buildings were constructed there and the town grew rapidly, spreading to encompass Bilino Polje, Klopce, and Radakovo, all villages during the Ottoman period. Many apartment blocks were built to house the new miners.

In 1991, just one year before the , Zenica was the headquarters of one of the first private and independent radio stations in all of Eastern Europe, Radio CD-CEMP. In the spring of 1993, Zoran Misetic, a journalist and the owner of the Radio CD-CEMP, was awarded with the Belgian Award for Independent Journalism; “Pen Of Peace”.

During the Bosnian War, the demographics of the city were altered to a certain extent, whereby the city received a large number of ethnic Bosniak from other parts of Bosnia while the Serb population left Zenica to parts of Serb controlled Bosnia. During the Bosnian war, Bosniak forces received financial and military aid only from Islamic countries because West had enforced an arms embargo on the newly formed state. Today, Zenica is trying to regain economic influence it used to have before the war. One of the biggest steel mills in South Central Europe has been privatized and now bears name of the Corp.

In 2005, population of Zenica municipality included 88% Bosniaks and 7% Croats.

Zenica, for many of its characteristics and features, is a specific urban and economic area. Its peculiarities originate from both its geographic location, since it is situated in the very center of , and the economic and social character of its development.

Zenica is situated in one of the largest and most beautiful valleys in the middle part of the River Bosna by which the state has got its name. The River Bosna well is in near and its mouth into the River near , which make it a natural north south corridor. The Zenica valley itself is stretching from Lasva canyon in the south, to Vranduk canyon to the north.

The main rail and road communications pass through the River Bosna valley. and airports are not far away from the region. With comparatively good roads (for the present Bosnian-Herzegovian circumstances), and standard gauge railway roads (with two tracks from Doboj to Zenica), Zenica is well connected to the north, west and east of the country. What is particularly important for its economic development is the access to sea via rail and roads. European corridor of the future north-south highway also passes through Zenica.

Zenica is a seat of Zenica-Doboj Canton. It is the center of the Canton in terms of administration, politics, economy, culture, education, science and sports.

Zenica-Doboj Canton is situated in the middle part of River Bosna valley, as well as on the banks of the River Krivaja, Usora and its confluents. Geographically, the area is equally distributed into the river valleys gradually elevating into the range of low hills, and then into the high mountains. Judging by this fact, one could make a conclusion that the area of Canton offers various opportunities: from agriculture in the valleys, cattle breeding and fruit growing in the hilly landscapes, to the exploitation of one-hundred-year old deciduous and periwinkle forests in the mountains.

Zenica – Doboj canton covers the area of convert|3904|km2|sqmi|0|spell=us, with its 427,000 inhabitants. This Canton is composed of the following municipalities: Zenica, , , , , , , , , , and South.Transport communications and industrial infrastructure have been relatively well developed. Geographic location of the Canton offers good communications with the central European countries. Those countries are connected with the via railroad going the way down through the River Bosna valley, crossing the whole territory of the Canton. The same route will be utilized for Sarajevo-Zenica highway being registered as a corridor of the European highway network. It is going to connect to the Adriatic Sea and Ploce port. The construction of the highway has already started.

Industry of Zenica – Doboj Canton is mainly characterized by two of its features: mono structure of its production facilities and large business systems. Zenica has been identified with its huge Steel Factory for decades, Zavidovici with its furniture factory Krivaja, Visoko with its leather-textile combine, Kakanj with its brown coal mines and Power Plant, etc. This paradox of socialism aspiring towards economic gigantism has a good chance of turning into one of the most realistic development opportunities for the Canton. Renewed production in these large systems offers practically unlimited opportunities for starting the whole range of small and medium-sized companies. With the skillful workforce and highly liberal and active management, one can establish all kinds of very successful businesses.

Privatization is a strategic goal of the economic development of the Canton. Presently, the state is the owner of the industrial facilities, large portion of land and all natural resources. Macroeconomists see the exceptional opportunity in the privatization process bringing forward positive results.