The film tells the story of two men — one, an evil crime lord; the other, a risk-taking police officer — who are cryogenically frozen in the year 1996 and reawakened in 2032. Following a massive earthquake in 2010 that destroyed much of Los Angeles, it merged with San Diego to form a planned city called San Angeles in which all crime has seemingly been eliminated from mainstream society. Some aspects of the film allude to Aldous Huxley's dystopian novel, Brave New World.[4] 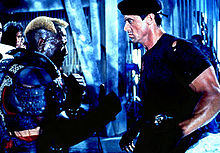 In 1996, Los Angeles Police Department Sergeant John Spartan leads a raid to save captured victims from the violent criminal Simon Phoenix. After Spartan scans the building for heat signatures and finds only eight — those of Phoenix's lackeys — he determines that the hostages are not in the building and attempts to capture Phoenix. Spartan corners Phoenix, who detonates explosives. As Phoenix is arrested, he accuses Spartan of having set off the explosives and killing the hostages. The police discover the bodies of the hostages in the rubble; Spartan is subsequently arrested and convicted of involuntary manslaughter. Phoenix and Spartan are both sent to "CryoPrison" (Spartan for 70 years, Phoenix for eternity), in which inmates are placed in cryogenic storage and rehabilitated through subconscious suggestion.

Over the next 36 years, Los Angeles, San Diego, and Santa Barbara become a pacifist utopia called "San Angeles" under Dr. Raymond Cocteau. Crime is virtually non-existent, and the paternalistic society forbids anything deemed unhealthy, including fatty foods and sexual intercourse. Even cursing is illegal: in one of the film's running gags, characters (typically Spartan) incur a fine each time he or she swears. During a 2032 parole hearing, Phoenix escapes using knowledge imprinted on his memory during his time in CryoPrison. The tamed officers of the San Angeles police are unable to subdue Phoenix, so they awaken John Spartan and place him under the care of Lieutenant Lenina Huxley, who has been fascinated with the late 20th century and can help Spartan cope with the changes. Spartan takes time to become accustomed to the future, while the others in the police force, particularly Huxley's superior, Chief Earle, find his ways barbaric.

Spartan and Huxley face Phoenix at a museum, as both officer and criminal realized that would be the only place in the pacifistic society where lethal weapons still exist. As Phoenix escapes, he encounters Dr. Cocteau and threatens to kill him, but finds that he is physically unable to do so. Dr. Cocteau suggests that Phoenix kill Edgar Friendly, the leader of a resistance force that refuses to accept Cocteau's society, and agrees to release other prisoners from CryoPrison to help him. Spartan and Huxley check Phoenix's rehabilitation program and find that he had been "rehabilitated" with training in a number of violent skills and access codes (while Spartan was rehabilitated as a sempster). Huxley procures a video from a museum security camera which captured Phoenix's encounter with Dr. Cocteau, and though the audio is undecipherable, Spartan is suspicious when he sees that Phoenix had plenty of time to kill Cocteau. Upon confronting Cocteau, an arrest warrant is placed on Spartan. Despite this, Spartan is able to convince Huxley to help him hunt for Phoenix in the subterranean passages where Edgar Friendly's resistance force lives.

When Spartan encounters the resistance force, he learns they are refugees who have refused to give up their way of life as required by Dr. Cocteau's utopia and have been forced to live in the wastelands of old Los Angeles. Spartan deduces that during his CryoPrison stay Phoenix was given a mental block that prevents him from killing Dr. Cocteau and fed the suggestion to kill Friendly. This would eliminate the last resistance to the Cocteau regime, something that the pacifist San Angeles Police Department is incapable of doing. Phoenix and his gang attempt to kill both Spartan and Friendly, but Friendly has retained his combat skills, and the two of them and Huxley drive them off.

With Friendly and Huxley's help, Spartan breaks into the facility and fights Phoenix, who uses his futuristic skills to his advantage. Phoenix admits that all the victims in 1996 were dead before Spartan arrived, which angers Spartan more. Spartan smashes a container of the potent cryogenic liquid against the floor and leaps to grab a malfunctioning crane arm overhead, as the floor and everything in contact with it freezes solid, including Phoenix. The damaged equipment in the room then explodes, with Spartan escaping just before the CryoPrison is destroyed.

As the other police forces arrive, Chief Earle is dismayed that without the leadership of Dr. Cocteau, their society will fall into chaos. Spartan suggests that Earle and Friendly work together to create a less restrictive, but law-abiding society, and turns to leave with Huxley, kissing her.

Jack Black played one of the "Wasteland Scraps" in the underground scene, who flinches when Spartan shoves the gun out of his face and says "And Cocteau's an asshole!"[5] Rob Schneider played Erwin, one of the operators in the Los Angeles Police control room; he would also play opposite Stallone in the 1995 movie Judge Dredd.[6]

Sandra Bullock replaced original actress Lori Petty in the role of Lenina Huxley after a few days filming.[7] Her character's name is a reference to Aldous Huxley, the author of Brave New World, and Lenina Crowne, a character in Brave New World.[4]

Originally Jean-Claude Van Damme and Steven Seagal were offered lead roles in the movie.[8] The role of Simon Phoenix was also offered to Jackie Chan.[9]

According to the scripts (before the final draft) the film starts out in 1998 and goes over to 2042 as John Spartan and Simon Phoenix were frozen for 44 years. In that draft, a cryocon was named Ignatious and was changed to Howie, while Howie was written out and replaced with a thug already released. Adam (played by Jesse Ventura) was Charlie and dies in the underground battle.

The film portrays the future in a quirky, satirical manner. The slightest breach of the law results in an automatically dispensed citation. All restaurants are Taco Bells, which "won the franchise wars" and evolved into fine-dining establishments. Twentieth-century advertising jingles are heard as popular music. Sexual intercourse and french kisses are illegal. In addition, it is stated there are no "non-natural caused deaths" since 2016; when Phoenix murders the CryoPrison warden and officers in order to escape, the police are notified with a "1-8-7" (Murder-Death-Kill), a code none of them can remember.

By 2032, toilet paper has fallen out of use; a set of three seashells is provided in every toilet stall. Though their method of use is left unexplained in the movie, Stallone later suggested a possible method in an interview as told to him by one of the film's writers involving extraction with two and scraping with one.[10]

For some non-American releases, references to Taco Bell were changed to Pizza Hut. This includes dubbing, plus changing the logos during post-production. Taco Bell remains in the closing credits. In the Swedish release the subtitles still use Taco Bell while the sound and picture has been altered as above. The original version released in Australia (on VHS) contained Taco Bell, yet the newer version on DVD was changed both in logo and dubbing to Pizza Hut. (In the scene where the restaurant patrons are looking through the glass windows to the fight scene outside, "Taco Bell" can be seen etched into the glass, even in the modified version.)

In one scene, Phoenix makes a comment about serial killer Jeffrey Dahmer being one of the cryo-inmates. Since this movie was made before his death in prison in 1994, in this alternate time period, he had been frozen with all the other criminals that were deemed too dangerous. Later versions of the film have this comment deleted.

The novelization of the movie suggests that several significant cuts were made from the finished film. For one thing, John Spartan mentions his daughter on several occasions, but the question of what happened to her is never answered; the novel has her turn up among the Scraps. Indeed, there is a scene in the film where Spartan is protecting an unnamed middle-aged woman, moments after his daughter revealed herself to him in the novelization. Also, in the novel, Spartan's daughter kisses him on the cheek, which provides a context for Spartan french-kissing Huxley. In the film, he simply grabs her and kisses her without preamble. Finally, in the novel, Zachary Lamb (an African-American police officer who serves with Spartan in both 1996 and 2032) is murdered by Phoenix when the latter steals Huxley's police car. In the movie, Lamb (almost inaudibly) says that he will wait by Huxley's police car. He is not killed, but he disappears from the movie, and Phoenix does indeed steal the car. This suggests that his death in the novel was supposed to happen in the movie as well.

A passing reference is made to the political era, including the U.S. Presidency of Arnold Schwarzenegger. Huxley explains to Spartan that the Constitution had been amended to allow Schwarzenegger to be elected despite his foreign birth. In the 1990s, Schwarzenegger had been mentioned as a potential candidate for political office, although at the time the movie he had an honorary posting as chairman of the President's Council on Physical Fitness and Sports, and he did run successfully for Governor of California ten years later. Schwarzenegger and Stallone often make tongue-in-cheek references to one another in their films, notably in Last Action Hero which was released the same year as Demolition Man.

On Siskel & Ebert, Gene Siskel gave the movie thumbs down for its routine violence, but did praise its "Funny offbeat script." Roger Ebert praised the movie: "Unlike so many other movies of its genre, it really does have a satiric angle to it."

The theme song to the film is titled "Demolition Man" and is played over the end credits. It is a remix (heavier version) of the song originally recorded by Grace Jones and written by Sting during his time as frontman for The Police. The song was first released in March 1981, as an advance single from Jones's fifth album, Nightclubbing. Sting released an EP featuring this song and other live tracks, entitled Demolition Man.

Acclaimed composer Elliot Goldenthal composed the score for the film. It was his second big Hollywood project after the Alien³ score.

Virgin Interactive released Demolition Man on various home video game systems. The 16-bit versions were distributed by Acclaim Entertainment. The 3DO version is a multi-genre game that incorporates Full Motion Video scenes, with both Sylvester Stallone and Wesley Snipes reprising their roles as their characters in scenes that were filmed exclusively for the game.

In April 1994, Williams released a widebody pinball game, Demolition Man (based on the movie). It is designed by Dennis Nordman. This game features sound clips from the movie, as well as original speech by Stallone and Snipes. This game was part of WMS' SuperPin series (Twilight Zone, Indiana Jones, etc.).

Hungarian science fiction writer István Nemere claims that most of Demolition Man is based on his novel Holtak harca (Fight of the Dead), published in 1986. In the novel, a terrorist and his enemy, a counter-terrorism soldier are cryogenically frozen and awakened in the 22nd century, when violence was purged from society. A copyright investigation proved that 75% of the film is identical to the book. However, Nemere chose not to initiate a lawsuit, as it would have been too expensive for him to hire a lawyer and fight against major Hollywood forces in the United States. The author claims that Hollywood had ripped-off works of many Eastern European writers after the fall of the Iron Curtain, and that he knows the person he claims to be responsible for illegally selling his idea to the filmmakers.[18]