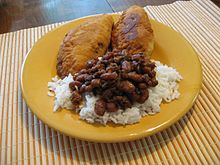 The Natchitoches meat pie is a regional dish from northern Louisiana, United States. It is one of the official state foods of Louisiana.[1]

Ingredients include ground beef, ground pork, onions, peppers, garlic, oil, and a pie shell. Natchitoches meat pies are often fried in peanut oil because of that oil's high smoking temperature. A number of restaurants in the historic district in Natchitoches serve meat pies, and frozen pies are available from grocers in northern Louisiana.

It has a savory meat filling in a crescent-shaped, flaky wheat pastry turnover. It is similar to a Spanish picadillo beef empanada. Varieties are throughout the colonies of the Spanish Empire. The Natchitoches meat pie is nearly identical to the traditional ground beef empanada of Argentina.

In 1717, Spain began a colony at Los Adaes,15 miles west of Natchitoches. It was abandoned after French attack in The Chicken War of June 1719. 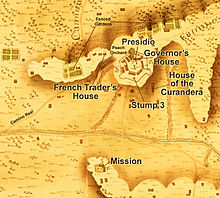 In 1721, Marqués de San Miguel de Aguayo lead a military expedition to retake eastern Texas for Spain. He built a new presidio, Nuestra Señora del Pilar de Los Adaes, a Catholic mission and a pueblo to protect the frontier of New Spain from French intrusion. Among the colonists were two Franciscan padres, 100 cavalry soldiers, 31 families and almost certainly, the skill to make meat pies. Los Adaes was the first capital of Texas, from 1729 until 1770. Los Adaes was largely evacuated in 1773; however, direct descendants of Spanish colonists continue to live in the area today.

This meat pie is not generally available from other ethnic regions of Louisiana (Anglo to the east & Franco et al. to the south). The Picayune's Creole Cook Book, published in 1901 by The Times Picayune of New Orleans, contains nothing comparable to Natchitoches meat pies in its list of over a thousand recipes. Recently, Natchitoches meat pies sold at food booths have become popular at the New Orleans Jazz & Heritage Festival.

The use of wheat flour as an ingredient is significant. Corn is grown locally. It is a staple of both Spanish and Native American food. Wheat is difficult to grow in this wet, warm climate. It would have been imported initially by annual supply convoy over El Camino Real de los Tejas (a portion later became The Old San Antonio Road) or from the French port on the Red River at Natchitoches. Historically, wheat flour would have been very expensive and reserved for high status and celebratory foods. Catholic Church Festivals continue to provide opportunity for older women to pass down the meat pie legacy.

The recipe has evolved over the last 300 years. Ground pork or pork sausage is now blended into the ground beef for additional flavor. Onions, bell pepper and when used garlic and parsley provide aromatics. Ground black pepper and cayenne pepper are added to get attention without being uncomfortable. Flour is added to browned meat and vegetable mixture to dry, thicken and loosely bind the filling. The meat filling can be used in other foods (e.g. tacos, tamales, enchiladas, stuffed bell pepper et al.) but the wheat turnover crust is a defining element. Traditional size is approximately 4 ounce (by weight) on 5"- 6" diameter pastry dough. The filling should be made the day before to allow flavors of the ingredients to meld. Filling, dough and tools should be chilled before assembly. Warm filling will cause the dough to disintegrate.

In the first part of the 20th century, meat pies were sold from home kitchens or from carts by street vendors. By 1967, Natchitoches meat pies were produced in commercial kitchens. Now, they may be ordered online. This progression has allowed more people to experience the memorable meat pies and their fame continues to grow.

Louisiana Public Broadcasting aired a program January 20, 2007 describing how to make Natchitoches meat pies. It is available on DVD entitled "A Taste of Louisiana with Chef John Folse & Company: Our Food Heritage - The Spanish Shows". An annual Meat Pie Festival, held in September, celebrates the Natchitoches meat pie. It includes pie making demonstrations, a meat pie cookoff, live music and more. The festival draws visitors from around the globe to sample the tasty pies.