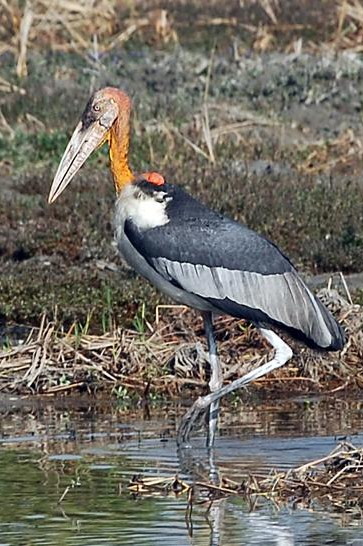 The Lesser Adjutant, "Leptoptilos javanicus", is a large wading bird in the family . It is a widespread species which is resident breeder in southern from east to southern and Java.

Most storks fly with neck outstretched, but the three "" species retract their neck in flight like a .

The Lesser Adjutant breeds in wetlands in tropical lowland. It builds a stick nest in trees. It often forms small colonies.

The Lesser Adjutant, like most of its relatives, feeds mainly on s and large s, but also young birds, s and s. It will also eat , for which its bare head and neck is an adaptation.

* Database entry includes a range map, a brief justification of why this species is vulnerable, and the criteria used
* Grimmett, Inskipp and Inskipp; "Birds of India". ISBN 0-691-04910-6