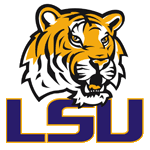 Since the SEC began divisional play in 1992, LSU has won or shared the SEC West title 7 times, and is 3-1 in the SEC Championship game.

*2008 - "BCS national championship" -- #2 LSU defeats #1 Ohio State University in the BCS national championship 38&ndash;24, becoming the first and only school to win 2 BCS national championship titles and improving their BCS record to 4&ndash;0, the best of any team.
*2007 - "Sugar Bowl" -- #4 LSU defeats #11 Notre Dame 41-14 in the first Sugar Bowl since the reopening of the .
*2004 - "Sugar Bowl" -- LSU wins the BCS national championship by defeating #1 BCS ranked Oklahoma 21&ndash;14.
*2002 - ""The Bluegrass Miracle"" -- #16 LSU survived an upset bid from unranked Kentucky by winning the game 33&ndash;30 on a miraculous 75-yard Hail Mary pass as time expired. Kentucky fans, believing they had won, had already rushed the field and torn down one goal post.
*2001 - "" -- #21 LSU staged an upset victory over #2 Tennessee, winning 31&ndash;20. The victory earned LSU a spot in its first since 1986, and knocked the Volunteers out of national title contention.
*1997 - "#1 Ranked Florida Taken Down by LSU" -- After nine straight losses to -led Florida, #14 LSU shocked the #1-ranked Gators 28&ndash;21 in Tiger Stadium, making the cover of "". It was the first time LSU beat a #1 ranked team.
*1995 - "Bring Back The Magic Game" -- Wearing its white jerseys at home in Tiger Stadium for the first time since 1982, LSU upset #5 Auburn, winning the game 12-6 as LSU DB Troy Twillie intercepted Auburn QB Patrick Nix's 11-yard pass into the end zone with no time remaining.
*1988 - ""The Earthquake Game"" -- Unranked LSU staged a near literal earth-shattering upset victory over #4 Auburn in Tiger Stadium, winning the game 7-6 with 1:41 remaining on a TD pass from QB to TB Eddie Fuller. The reaction of the crowd was so immense that it registered as an earthquake on a seismograph in LSU’s Howe-Russell Geoscience Complex.
*1972 - "Jones to Davis;". "The Night The Clock Stopped"" -- #6 LSU survived an upset bid from unranked Ole Miss in Tiger Stadium by winning the game on a TD pass from QB to RB Brad Davis. Ole Miss fans say the 1972 contest featured a few seconds of free football. The Tigers trailed the Rebels 16&ndash;10 with four seconds to play. After a lengthy incompletion by Jones, the game clock still showed one second remaining. The Tigers used the precious second to win the game on the "last play," 17&ndash;16. The home-clock advantage inspired a sign at the Louisiana state line reading, "You are now entering Louisiana. Set your clocks back four seconds."
*1966 - "Cotton Bowl" -- Unranked LSU upset #2 Arkansas, winning the game 14&ndash;7 and snapping Arkansas' 22-game winning streak.
*1959 - "Billy Cannon's Halloween Night Run" -- Late in the game between #1 LSU and #3 Ole Miss, LSU was trailing 3&ndash;0. Then returned a punt 89 yards for a TD, breaking seven tackles. The Rebels then drove down the field but were stopped on the LSU 1 yard line as the game ended resulting in a 7&ndash;3 victory for LSU in Tiger Stadium.
*1959 - "" -- #1 LSU wins the 1958 national championship, beating #12 Clemson 7&ndash;0. The only score was a pass from to Mickey Mangham.

LSU's oldest rival is Tulane; the first LSU-Tulane football game was played in 1893 and for the first fifty or so years of Tiger football, no team was more hated by LSU fans than the Green Wave. The series, in which they battle for the Tiger Rag, was played continuously from 1919 to 1994. The interstate rivalry featured two teams which were geographically close (Baton Rouge and New Orleans are roughly 80 miles apart) and drew on socio-political tensions between the state's capital and seat of government and its biggest and most culturally important city. As opponents in the SIAA, and SEC, the Tulane rivalry flourished for many years but slowly declined after Tulane left the SEC and de-emphasized athletics. Until 1949, the series was very competitive, with LSU leading 23&ndash;18&ndash;5; since 1949, LSU has dominated, going 44&ndash;4&ndash;2. The two teams renewed the annual series in 2006.

LSU's traditional SEC rival is Ole Miss. Throughout the fifties and sixties, games between the two schools featured highly ranked squads on both sides and seemingly every contest had conference, and at times national, title implications. While the rivalry died down from the seventies to the ninties, the rivalry has again been gaining steam and publicity, due to mostly the 2003 Season when Ole Miss could have been a top ten team and go to the SEC Championship while LSU would have gone to the national championship depending on who won the game. A trophy has now been named for the LSU-Ole Miss rivalry known as the "Magnolia Bowl". Recently, the second to last regular season game have been between these two colleges. There is still a strong rivalry between the schools, particularly for Ole Miss.

While Auburn's rivalries against Alabama and Georgia may overshadow its rivalry with LSU, in recent years, LSU's biggest rival has been the Auburn Tigers. The two share more than just a nickname, as they have both enjoyed success in the SEC's Western Division and plenty of memorable match ups. Either Auburn or LSU has won at least a share of the SEC Western Division championship for five of the last six years. The home team won every game from 2000 through 2007, until visiting LSU defeated Auburn in 2008. Both the 2007 and 2008 games saw LSU win dramatic, come-from-behind victories with last minute touchdown passes.

LSU and Alabama have played every year since the 1960s, with LSU currently holding a 5-game winning streak against the Tide. Alabama holds a historic edge in the series, 43&ndash;23&ndash;5. Many trace the origins of the rivalry back to a 15-game undefeated streak Alabama had in Tiger Stadium, which is generally considered to be one of the most hostile atmospheres in college football. From 1971 to 1998, the Crimson Tide went 14&ndash;0&ndash;1 in Baton Rouge. While their rivalries against Auburn and Tennessee may overshadow their rivalry with LSU, the significance of this rivalry increased after Alabama hired former LSU coach in 2007. Prior to the initial Saban season, "Sports Illustrated" ranked the game #13 in its "Top 20 Games To Watch In 2007" list. [cite web | title = Top 20 Games To Watch In 2007 | work = SI.com | url = http://sportsillustrated.cnn.com/multimedia/photo_gallery/0708/top.cfb.games.watch/content.8.html | accessdate = 30 September | accessyear = 2007 ] The media has given the Alabama-LSU game the moniker "Saban Bowl." The 2007 game saw the LSU Tigers win a dramatic come-from-behind victory, with a final score of 41&ndash;34.

After the Razorbacks left the in 1990, Arkansas joined the SEC in 1991 and began a yearly rivalry with LSU. Spurred by both the SEC and the schools, LSU and Arkansas have developed a more intense football rivalry. The winner takes home the Golden Boot, a trophy in the shape of the states of Arkansas and Louisiana that resembles a boot. The game, played the day after Thanksgiving, is usually the last regular season game for each team and is broadcast on . In 2002, the rivalry gained momentum as the game winner would represent the Western Division of the SEC in the . Arkansas won the exciting game on a last second touchdown pass by Matt Jones. In 2006, the Razorbacks, who had already clinched the SEC Western Division and were on a 10-game winning streak, were beaten by LSU in Little Rock. In 2007, Arkansas stunned top-ranked LSU in triple overtime, giving them their first win in Baton Rouge since 1993.

Tailgating — Throngs of Tiger fans from across the region descend on LSU's campus for every home game, setting up motor homes and tents for Louisiana's biggest party other than Mardi Gras.

The 's Pregame Show — The LSU pregame show was created in 1964, and revised over the next nine years into its current format. The marching band lines up along the end zone shortly before kick off. Then the band strikes up a drum cadence and begins to spread out evenly across the field. When the front of the band reaches the center of the field, the band stops and begins to play an arrangement of "Pregame" (Hold that Tiger). While it does this, the band turns to salute the fans in all four corners of the stadium. Then the band, resuming its march across the field, begins playing "Touchdown for LSU." At this point, the LSU crowd chants "L-S-U, L-S-U, L-S-U..." The band also plays "Pregame" before it enters the stadium, while literally running down the hill into Tiger Stadium.

White Jerseys — LSU is notable as one of the few college football teams that wears white jerseys for home games as opposed to their darker jerseys (in their case, purple). Most other NCAA football teams wear their darker jerseys in home games, even though football is one of the few college sports that do not require a specific jersey type for each respective team (for instance, requires home teams to wear white or light-colored jerseys while the away team wears their darker jerseys), and is similar to the NFL in letting the home team decide what to wear. The tradition started in 1958, when Coach decided that LSU would wear white jerseys for the home games. LSU went on to win the national championship that year. Since then, LSU continued to wear white jerseys at home games. Then in 1982, new NCAA rules prohibited teams from wearing white jerseys at home. Because of this, LSU wore purple jerseys during home games from 1983 to 1994. In 1995, LSU's new coach, , was determined to restore LSU's tradition of white home jerseys. DiNardo personally met with each member of the NCAA Football Rules Committee, lobbying LSU's case. DiNardo was successful, and LSU again began wearing white jerseys at home when the 1995 season began. In LSU's first home game with the white jerseys, unranked LSU prevailed in a 12-6 upset victory over #6 Auburn. In 2000, LSU's new coach, , altered the tradition of the white home jerseys: now LSU only wears white jerseys for the home opener and for home games against SEC opponents. For non-SEC home games other than the home opener, LSU wears purple jerseys at home.

The rule allowing LSU to wear white at home has one stipulation: the visiting team must agree. On two occasions, LSU was forced to wear colored jerseys at home. The first time was in 1996 against Vanderbilt, who was still angry at LSU for hiring Gerry DiNardo, who left Vanderbilt to become LSU's head coach after the 1994 season. LSU wore gold jerseys for that game (a 35-0 LSU victory). The second time was in 2004, when Oregon State did not want to wear their black jerseys in Louisiana in late summer.Chinese Bandits – Whenever LSU forces a turnover or gets the ball back via a defensive stop, the LSU band plays the "Chinese Bandit" tune. The entire stadium bows to the defense while the tune is played. The term "Chinese Bandits" originated as the nickname that LSU Coach gave to the defensive unit he organized in 1958, which helped LSU to win its first national championship. The next season, the 1959 Chinese Bandit defense held their opponents to an average of only 143.2 yards per game. No LSU defense since has done better.

H style goal posts — LSU's Tiger Stadium uniquely sports "H" style goal posts, as opposed to the more modern "Y" style used by most other schools today. This "H" style allows the team to run through the goal post in the north endzone when entering the field.

Yard lines — Tiger Stadium also is notable for putting all yard line numbers on the field, not just those that are multiples of 10. However, the 10-yard-line numbers are the only numbers that get directional arrows, as the rules make no provision for 5-yard-line numbers.

The following LSU players and coaches are members of the .