Constantine VIII (Greek: Κωνσταντίνος Η΄, Kōnstantinos VIII) (960 – 11 November 1028) was reigning Byzantine emperor from December 15, 1025 until his death. He was the son of the Emperor Romanos II and Theophano, and the younger brother of the eminent Basil II, who died childless and thus left the rule of the Byzantine Empire in his hands.

As a youth, Constantine VIII had been engaged to a daughter of Emperor Boris II of Bulgaria, but in the end he married a Byzantine aristocrat named Helena. By her he had three daughters: Eudokia, who became a nun, Zoe, future empress, and Theodora. 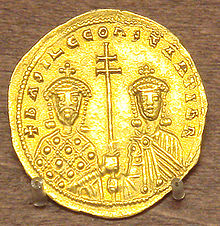 Constantine VIII had been crowned with his brother by their father from 962; he was then only an infant. However, for some 63 out of the 68 years of his life he was eclipsed by other emperors, including Nikephoros II Phokas, John I Tzimiskes, and Basil II. Even when his elder brother became senior emperor, Constantine was perfectly content to enjoy all the privileges of imperial status without concerning himself with state affairs. On occasion Constantine participated in his brother's campaigns against rebel nobles. In 989, he acted as mediator between Basil II and Bardas Skleros. Otherwise he spent his life in the search of pleasure and entertainment, including spectator sports at the Hippodrome of Constantinople, or amusing himself with riding and hunting.

When Basil II died on December 15, 1025, Constantine finally became sole emperor, although he ruled for less than three years before his own death on November 11, 1028.

Physically Constantine was tall and graceful, where Basil had been short and stocky. He was a superb horseman. By the time he became emperor, he had chronic gout and could hardly walk. His reign was a disaster because he lacked courage and political savvy. He reacted to every challenge with impulsive cruelty, persecuting uppity nobles and allegedly ordering the execution or mutilation of hundreds of innocent men. Constantine carried on as he always had: hunting, feasting, and enjoying life – and avoided state business as much as possible. He was poor at appointing officials. Within months, the land laws of Basil II were dropped under pressure from the Anatolian aristocracy, although Constantine struck at the nobility when threatened by conspiracy.

Like his brother, Constantine died without a male heir. The empire thus passed to his daughter Zoe, whom he had married to Romanos Argyros.