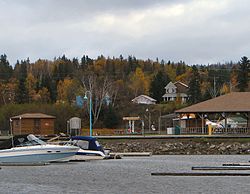 Wawa is a township in the Canadian province of Ontario, located within the Algoma District. Formerly known as the township of Michipicoten, the township was officially renamed for its largest and best-known community in 2009.

The township also includes the smaller communities of Michipicoten and Michipicoten River, which are small port settlements on the shore of Lake Superior.

Wawa's history is rich in mining, forestry and the fur trade. Although mining attempts began as early as the late 1660s, it wasn't until 1896 that gold was discovered on nearby Wawa Lake which led to a rush to the area. The population grew from a handful of people to approximately a thousand people.

In 1898 the town site at the Mission was registered as "Michipicoten City". In 1899 Wawa was surveyed and plotted into a town and registered as Wawa City. In the latter half of the 1950s, the town's name was changed to Jamestown, in honour of Sir James Hamet Dunn, but it was later changed back to Wawa by the request of the community's residents.

Gold production had slowed by 1906, but as mining technology improved, additional amounts began to be extracted from the area. Gold mining in the Wawa area prospered and receded several times in the 20th century, and it continues today.

Iron ore extraction has also been an important industry in the area. The community was served by the Algoma Central Railway.

The search for the elusive precious yellow metal during the Michipicoten gold boom led to the unexpected discovery of iron ore in 1897. Rock samples made their way into the hands of Francis Hector Clergue, an American entrepreneur who at once recognized the ore for its potential in the form of a steel company in the industrial future of Sault Ste. Marie.

The first supply of ore extracted form the Helen Mine was shipped to Midland, Ontario in July 1900 and thus became the "first boat shipment of Canadian iron ore to a Canadian port." The mine produced high grade iron ore until 1903 when operations shut down due to financial difficulties which were confronting Clergue and his company. By 1904 the mine returned to full production capabilities and was mining 1000 tons of hematite ore a day. From 1900 to 1918 the Helen Mine had the largest production of any iron mine in Canada during that period.

In 1909 a second hematite ore deposit was uncovered near the Magpie River 12 miles north of the Helen Mine. The Algoma Steel Corporation, organized between 1904 and 1909 in Sault Ste. Marie, bought up the claims and operated both the Magpie and the Helen Mine for the next decade.

The Helen Mine continued ore production until the year 1918 when they felt the reserve of hematite ore was finally depleted. The same fate was followed by the Magpie Mine in 1921. The Census of Canada records that the population of the Michipicoten region in 1921 experienced a drop from 1001 in 1911 to 101 ten years later.

It was not until 1937 with the threat of war in Europe and the emergence of a profitable market for Canadian iron ore, that the Helen Mine was re-opened. A sintering plant was constructed on the northern bank of the Magpie River two miles west of the mine to treat the siderite ore before shipping it to the blast furnaces at Algoma Steel in the Sault. The plant became the centre for a small community of workers and their families called Sinterville.

The Helen Mine remained an open pit operation until 1950 when all production was from underground mining. In 1960 the new George W. MacLeod Mine went into production adjacent to the Helen Mine. The ore was transported on an aerial tramline which consisted of over 280 steel, 3 ton buckets travelling underground and surfacing three quarter miles west of the 2066 foot vertical MacLeod Shaft, then continuing the remaining two miles to the sinter plant on overhead cables. In 1979 this system was replaced by the latest in underground mining technology, the highest lift single-drive conveyor in the world.

During the summer of 1971, Wawa hosted an archaeological field camp, known as the Wawa Drop-In project or the Big Dig, for young hitchhikers travelling along Highway 17. The project was directed by the late Professor KCA Dawson.[3] and supported by the Federal Government as part of its youth employment program. The results of fieldwork at several important sites were never published, though all the records are currently held by the National Museums of Civilisation in Ottawa.[4]

Throughout the nineties, Algoma Ore and Wawa continued to be challenged by international markets that plagued both the gold and iron mining industries. In December 1997, Algoma Steel announced that they could no longer support the high cost of extracting low grade iron from Algoma Ore. Even though Wawa's mountain of iron ore still had more to give, operations were shut down in June 1998, 100 years after iron was first discovered in this remote corner of Northern Algoma.

Wawa suffered a population decline after the Helen Mine and Algoma Ore Division sinter plant shut down, leaving its main industries as forestry and tourism. In recent years, diamond prospecting and proposals to create a trap rock mine on the shore of Lake Superior have been taking place, however no mining activities of any kind have yet been established.

In another blow to the town's economy, in October 2007, Weyerhauser, which operates an oriented strandboard mill 30 km east of the town, announced an indefinite shutdown of their mill. The final production shift is slated to run at the end of December 2007, and with current demands for wood products being very low, it is unlikely to reopen any time in the near future. Wawa's economy will likely suffer a near-collapse in the coming year, as over 135 more jobs are lost, causing more residents to move away; this is expected to have a spin-off effect on other businesses.

With the current collapse of the forestry industry not only in Wawa, but in the neighbouring communities of Dubreuilville and White River, the municipality of Wawa is facing grave difficulties attracting new industry to the community and region. 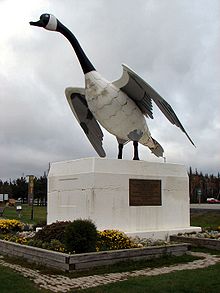 The community is known for its 28-foot-tall metal statue of a Canada goose, which was built in 1960, and dedicated to the community in 1961. Wawa takes its name from the Ojibwe word for "wild goose", wewe. Wawa was defined as wild goose in the Songs of Hiawatha. On July 5, 2010, Canada Post made a commemorative stamp of the Wawa Goose as part of its Roadside Attractions collection.[8]

The town is also known for snowmobiling and sport fishing. The Voyageur Hiking Trail passes through the town. One notable shopping location[says who?] is Young's General Store, home of the locally famous Pickle Barrel.

The municipal council is composed of one mayor and four councillors. The current mayor is Howard Whent and the councillors are Linda Nowicki, Ron Rody, Mike Abbott, and Ken Martin.

Highway 17, the main route of the Trans-Canada Highway, passes through the township, although the primary townsite is located on Highway 101, two kilometres east of the junction with Highway 17. Sault Ste. Marie is located 227 kilometres to the south. Lake Superior Provincial Park is located just south of the town.

Wawa is located 24 kilometres west of Canadian National Railway's Hawk Junction station on the rail line from Sault Ste. Marie to Hearst. The line, formerly known as the Algoma Central Railway, provides tourist operations, as well as passenger and freight service to communities in northern Ontario.

A dial-in/demand response transit system has been available since February 2006. The service is provided by a single bus that can accommodate 12 passengers plus up to two wheelchairs.[9]

Wawa is notorious for its difficulty to hitchhike from. Travellers often become stranded for a week or more.