Tidworth is a town in south-east Wiltshire, England with a growing civilian population. Situated at the eastern edge of Salisbury Plain, it is approximately 10 miles west of Andover, 12 miles south of Marlborough, 24 miles south of Swindon, 15 miles north by north-east of Salisbury and 6 miles east of Amesbury. Its population is approximately 9,500.

Tidworth was listed in the Domesday Book as Todeorde, in the Andover Hundred, in "Hantscire". It was once the family home of the Studd family. On John Speed's maps (1611), the town is referred to as Tudworth, North Tudworth belonging to Amesbury hundred in "Wilshire", and South Tudworth to Andover hundred in "Hamshire". When the boundary between Wiltshire and Hampshire was redrawn in 1992, the old distinction between North Tidworth and South Tidworth vanished, and the entire town became part of Wiltshire. The separate parts remained as two separate civil parishes until April 1, 2004.

In recent years the population of Tidworth has increased in both the civilian and military quarters (Tidworth is home to the 1st Mechanised Brigade). The military mainly because many units are being relocated to Tidworth as the army centralises its forces around the major training areas of the country, due to both economic and practical purposes. Its situation near the A303, and hence the M3, make it attractive to commuters.

The barracks at Tidworth are named after British Army battles in India and Afghanistan (e.g. Aliwal, Assaye, Bhurtpore, Candahar, Delhi and Lucknow).

Tidworth has a small commercial area, containing: 2 supermarkets (a Lidl and a large Tesco opened in December 2007), 2 hairdresser's, 2 veterinary surgeries and various takeaway outlets. This area is based upon Station Road (so named because there was once a railway station there). At the base of this hill is a dental surgery (completed in 2005) which serves Tidworth and the surrounding area (approx. 5,000 people). In 2003 a new medical centre was completed, the cost being split between the Ministry of Defence and the NHS and it serves both the armed forces and their dependants within the surrounding area.

Tidworth has one of the lowest crime rates per thousand in Wiltshire and between the years of 1990 and 2004 only one major crime took place.[citation needed]

Zouch, Avon and Mathews are exclusively married quarters for NCOs in the armed services living in Tidworth or one of the many other military bases nearby. Officers' married quarters are mainly housed in South Tidworth.

The new Wellington Academy opened in September 2009, serving Tidworth, Ludgershall and surrounding villages. Located on the eastern edge of Tidworth at Castledown, the academy moved into its £32million purpose built campus in 2011, which includes boarding for 100 students and dedicated CCF facilities. The boarding unit has been funded by central government as part of a drive to improve stability for military families. The local garrison commander is a governor of the academy, which is named after Wellington College in Berkshire, the independent school founded as a national memorial to the Duke of Wellington. The academy is a non-selective, 11-19 state funded secondary school. 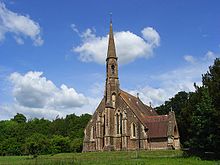 St Mary's Church in South Tidworth was built in 1878. It is a Grade I listed building[1] now in the care of the Churches Conservation Trust.[2] The church was built, of rock faced brown stone, in a Gothic Revival style, by John Johnson, with work supervised by G.H. Gordon,[3] for Sir John Kelk of the Kelk Baronets,[2] near the site of an older medieval parish church.[4] The chancel is 28 feet (8.5 m) by 17 feet (5.2 m) and the nave 43 feet (13 m) by 17 feet (5.2 m). There are also north and south aisles and a north vestry and a south porch.[5] The interior includes carvings and polished marble shafts in the columns of the arcade piers. The chancel floor is laid with Italian mosaic. There is also a silver chalices and patens of 1837 and 1877 and a silver-gilt flagon of 1869.[5] The altar and stone carvings were built by Farmer & Brindley.[6] The church was declared redundant in 1972 and passed to the Redundant Churches Fund, which became the Churches Conservation Trust, in 1973.[3]