Canal of the cervix

Canal of the cervix

The wall of the canal presents an anterior and a posterior longitudinal ridge, from each of which proceed a number of small oblique columns, the palmate folds, giving the appearance of branches from the stem of a tree; to this arrangement the name arbor vitæ uteri is applied.

The folds on the two walls are not exactly opposed, but fit between one another so as to close the cervical canal. 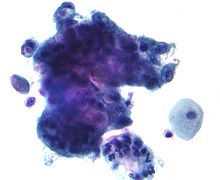 Micrograph of an adenocarcinoma that arose from the endocervical mucosa. Pap stain.

The endocervical mucosa is a site from which adenocarcinoma can arise. Endocervical adenocarcinoma, like cervical cancer (squamous cell carcinoma), often arises in the milieu of human papilloma virus infection.[1]