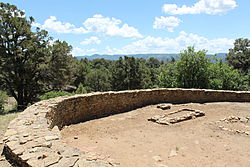 The Great Kiva was believed to have been built circa 1084 as part of the Chimney Rock settlement. Originally, it would have had an adobe plaster exterior. It was rebuilt in 1972.

Chimney Rock Archaeological Area is an archeological site within the San Juan National Forest in Colorado. This area is located in Archuleta County, Colorado between Durango and Pagosa Springs and is managed for archaeological protection, public interpretation, and education.

Listed on the National Register of Historic Places in 1970, the site was home to the ancestors of the modern Pueblo Indians 1,000 years ago and is of great spiritual significance to these tribes. Their ancestors built over 200 homes and ceremonial buildings high above the valley floor, probably to be near the sacred twin rock pinnacles. Of the hundreds of individual sites dotting the landscape, researchers have thus far found 91 structures that may have been permanent structures, plus 27 work camps near farming areas, adding up to more than 200 individual rooms.[2] Housing approximately 2,000 ancient Pueblo Indians between A.D. 925 and 1125, the settlement included a Great House with round ceremonial rooms, known as kivas, and 36 ground-floor rooms.

Since the 1960s, Dr. Frank Eddy of the University of Colorado and others have studied the site, and research continues.[2]