Craig Andrew Breslow (born August 8, 1980, in New Haven, Connecticut) is a Major League Baseball relief pitcher for the Oakland Athletics. He throws left-handed, and is considered a lefty specialist.

Breslow is Jewish.[8][9] He has pitched on Yom Kippur while fasting, and noted: “Being Jewish is more difficult in baseball … but I try to do what I can in terms of paying attention to holidays."[10] His parents, Abe and Anne Breslow, are teachers.[11]

When he was 12 years old, his sister Lesley—two years older—was diagnosed with pediatric thyroid cancer.[12][13] "Something as traumatic as that has a lasting impact," Breslow said. "It confirmed my interest [in medicine]. Being a doctor went from being a prestigious profession to something that changes people's lives."[13] The experience led Breslow to take an interest in molecular biophysics and biochemistry. Later in life, Breslow formed a non-profit foundation to help children with cancer. His sister in 2008 was a 15-year cancer survivor, and expecting her first child.[13][14]

Breslow attended Trumbull High School in Trumbull, Connecticut, graduating in 1998, and was a standout in soccer and baseball.

In baseball, he was the winning pitcher in the LL State Baseball championship game, playing with teammate and future Arizona Diamondbacks 2nd round draft pick, Jamie D'Antona. As a senior in high school, Breslow played in the Connecticut/Massachusetts All-Star game at Fenway Park.

In soccer, he helped lead Trumbull High to their first-ever state tournament victory. He was known for having an uncanny ability to score from very difficult and wide angles and ranks among the school's all-time scorers. Scholastically he excelled as well, scoring 1410 on his SAT exam.[15][16]

Breslow was captain of the Yale University baseball team, the Yale Bulldogs in the Ivy League.[17] As a junior, he led Yale in victories (three) and ERA (2.61, 3rd in the Ivy League), striking out 66 batters in 51⅔ innings (ranking 13th in the nation in strikeouts per nine innings). He earned All-Ivy honors that season, which included a 16-strikeout performance vs. Cornell and a one-hit shutout at Harvard. As a senior, he led the Ivy League with a 2.56 ERA.[18] In 2002, he was named a Jewish Sports Review College Baseball First Team All-American, along with future major leaguers Sam Fuld and Adam Greenberg.[19] He graduated in 2002 with a B.A. in molecular biophysics and biochemistry.[13][20]

He was drafted in the 26th round by the Milwaukee Brewers in 2002.[21] He deferred acceptance to the New York University School of Medicine because of his "love of the game".[22]

Breslow became the first former Bulldog since pitcher Ron Darling (1983–95) to reach the Major Leagues when he made his debut with San Diego in 2005, and was not followed by another Yale player until catcher Ryan Lavarnway in 2011.[23][17] Breslow was also one of six Ivy Leaguers on major league rosters at the beginning of the 2009 season.[24]

In 2003, he averaged 11⅓ strikeouts per nine innings for the Single-A Beloit Snappers, fanning 80 batters in 65 innings.

In 2004, Breslow played 79 games in the Brewers system, reaching the Class A California League High Desert Mavericks. The Brewers released Breslow during the 2004 season. He then applied for medical school at NYU, but they would accept him only if he agreed to stop playing baseball.[13] "I wasn't ready to give it up," he said. "I thought I could still get guys out."[13]

Breslow completed the 2004 season pitching for the New Jersey Jackals of the Northeast League, an independent baseball league. He held batters to a .204 average and recorded 37 strikeouts in 26⅓ innings, an average of 12.6 strikeouts per nine innings.[25]

Signed by the San Diego Padres in 2005 for $1 out of a tryout camp, he excelled, getting $1,500 after making the Class AA Southern League Mobile BayBears, allowing a .212 average in 52 innings over 40 outings while striking out 47 and walking 17 with a 2.75 ERA.[26] He earned his first big league callup on July 23, 2005. He was mistaken for the team batboy during his first day with the Padres.[27] He became the 24th Yalie to play in Major League Baseball and the first to reach the major leagues since Ron Darling.[28] "It wasn't until I was playing baseball in the big leagues that I thought I could play baseball in the big leagues," he said.[13]

Breslow then split the rest of the season between San Diego, for whom he had a 2.20 ERA in 14 games, and the Triple-A Pacific Coast League Portland Beavers. The Padres non-tendered Breslow in December 2005. 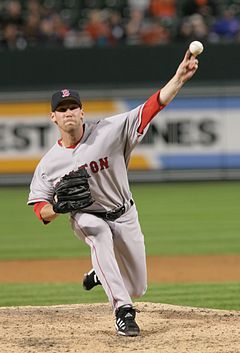 Breslow pitching for the Red Sox in 2006.

In 2006, Breslow was named an International League (AAA) All-Star while with the Pawtucket Red Sox. In 67 innings of work for the season, he was 7–1 with a 2.69 ERA and struck out an average of 10.3 batters per nine innings. He was selected by his teammates as the PawSox Most Valuable Pitcher. He was promoted to Boston in the second half of the season, making him the fourth Jewish player (in addition to Kevin Youkilis, Gabe Kapler, and Adam Stern) to play for the Red Sox that year.

Off the field, he helped Red Sox pitcher Josh Beckett win a bet against catcher Doug Mirabelli. Breslow calculated how many times a baseball spins when it's thrown 90 miles an hour from the pitcher's mound to home plate.[29] "Josh wanted to know if I could figure out how many times a baseball spins on the way to the plate," Breslow said. "There's a lot of variables, but I put in some figures and came up with answers for a fastball, curve, or slider. It's rather simple once you do it."[13][30]

Breslow earned a trip to the Triple-A All-Star game in July for the second straight season for the Pawtucket Red Sox. At the end of June, Breslow’s ERA was 1.55. But his final numbers for 2007 were 2–3, 4.06 ERA, 25 walks, 73 strikeouts in 68 innings. He was promoted to Boston on September 1, 2007, but did not make an appearance and was sent back to Pawtucket on September 2 to make room on the team roster for Jon Lester.[31] Breslow was added to the postseason roster, and has a ring from winning the 2007 World Series – without pitching a game in the majors that year.[32]

On March 23, 2008, Breslow was claimed off outright waivers [33][34] by the Cleveland Indians and was added to the 40-man roster.[1][21] Breslow was out of minor league options, so the Indians had to keep him on their big league club out of camp, or expose him to waivers again.[35] Breslow won the final spot on the Indians' Opening Day roster.[36] "He's strong," Cleveland manager Eric Wedge said. "I want to be able to use him two innings. He's done that—if you look at his innings pitched the last couple of years versus appearances."[17]

On May 23, after pitching in nine games, Breslow was designated for assignment.[37]

"He's not a guy who blows you away on the radar gun. He's not a big, imposing guy. But he gets people out. He knows how to pitch and when to throw what. He figures out ways to get guys out." [38]

The Twins figured they had a 50–50 chance of losing Breslow when they placed him on waivers in May 2009 to clear space on their 25-man roster for fellow left-hander Sean Henn. Oakland needed bullpen help and claimed Breslow before his 72-hour waiver period expired. Had he cleared, the Twins could have sent him to Class AAA Rochester. "We were hoping to keep him," said assistant general manager Rob Antony.[42] "We lost a bullpen guy without trying to lose a bullpen guy," manager Ron Gardenhire said. "I kind of got shocked when they told me."[13][43][44]

Searching for an experienced left-hander for their bullpen, the Oakland Athletics claimed Breslow off waivers on May 20, 2009.[45] According to assistant general manager David Forst, the A's had tried to acquire him on other occasions.[46] "I'm excited about taking a look at him," A's Manager Bob Geren said. "He's a left-handed guy that's experienced. He's had some success at this level."[47] He was the A's key lefty out of the bullpen for the remainder of the season.[48]

He also continued to impress teammates with his intellect. "Breslow knows everything," A's left-hander Dallas Braden said. "I seriously want to be Craig Breslow when I grow up."[51]

Asked in 2010 whether there was a story behind his jersey number, Breslow said: "When you spend time with many organizations over 5.5 years, you don't really care what number you get."[52]

His 71 strikeouts were the most by a lefty reliever in Oakland history.[54] He finished with a career-high 74⅔ innings.[54] He was named the 2010 Most Valuable Jewish Pitcher by Jewish Major Leaguers, as Ryan Braun won hitter honors.[55][56]

In 2008, Breslow started the Strike 3 Foundation, a non-profit charity that raises awareness, support, and funding for pediatric cancer research, and has teamed up with CureSearch, which unites the National Childhood Cancer Foundation and the Children's Oncology Group, the world's largest childhood cancer research organization.[28][62] Breslow hopes to hold annual events in Connecticut and Minnesota, as well as in Florida during spring training.[63] His first benefit raised $100,000, and his second benefit more than $85,000.[13][64]

Breslow's collegiate career and his first year with the Brewers organization are partially discussed in the book Odd Man Out: A Year on the Mound with a Minor League Misfit by Matt McCarthy. McCarthy and Breslow were friends and teammates at Yale, and were on rival Pioneer League teams during the 2002 season.[65] He also starred in a parody of Rex Ryan's foot fetish video called "ihaveprettylefthand".[66]