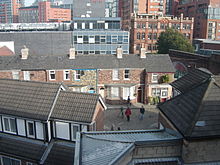 The sets of the British ITV soap opera Coronation Street have changed since first broadcast in December 1960. The current set is based at Granada Studios backlot in Manchester city centre.

As of 2011, It consists of early 20th century terraced houses, with a public house, The Rovers Return, at one end, and a corner shop at the other. The other side of the street consists of a factory, two shop units, a garage and three semi-detached houses all appearing to have been constructed in the late 1980s.

From 1960 until 1968, the complete set of Coronation Street (house interiors and exteriors) was erected inside one of Granada Television's studios in central Manchester, with the houses reduced in scale to 3/4.[1] This small set was awkward for the actors, who had to walk more slowly than normal to appear in scale with the houses. There are a number of reasons for the use of an indoor studio; the main one being that the infancy of production techniques at the time did not allow easy recording and editing of sequences filmed in different locations.[2] It wasn't until 1967 that editing techniques had improved enough to allow Coronation Street to be filmed on separate interior and exterior sets.

The studios were not big enough for the entire street to be erected at once, so it was split into two halves.[3] The pavements and cobbled street were painted onto the studio floor.[2] Despite the limitations of the cramped studio set, some complex and dramatic scenes were filmed there. These include the collapse of Number 7 in 1965, and two years later, a special-effects-laden storyline involving a train crash; the viewers did not know if stalwart Ena Sharples was dead under the rubble.

In 1967, Granada Television made the decision to build an outside set. This new set was built on some old railway sidings near Granada Studios, and coincided with a storyline of the demolition of Elliston's Raincoat Factory and the Mission Hall, and the subsequent building of maisonettes opposite the terrace.[4]

Coronation Street's 1968 set was not all that different from the interior version previously used, with the wooden facades that had been used in the studio simply being erected on the new site. The only real change seen on screen was natural light illuminating the street for the first time. In late 1968 the Street was constructed in brick, with roofs and back yards added later. The set was still reduced in scale and quite cramped and even though the pavements and cobbled street were now real, the cobbles were not parallel to the houses, and ran diagonally down the street.[1] The first exterior set was referred to as "the coldest place on earth".[3] by actors and crew since they disliked working on it due to a near-constant wind which blew directly down the street. Filming on the new exterior set was kept to a minimum, not only because the actors disliked the set, but because of the high cost of using film for exterior sequences.[5]

In 1982 a full-size exterior street was built in the Granada backlot, with the cobbles running in the correct direction. The new set was opened by Queen Elizabeth II in 1982.

Since it was intended to be permanent, the houses were constructed from reclaimed Salford brick and roof slates to give an authentic look. The buildings are not complete, most lacking interior walls. The chimneys are made of fibreglass since there is insufficient support for brick ones. The building interiors are used as offices for writers and as store rooms for props used in outdoor shooting, aside from the take away, butcher shop and betting shop, which are built so that filming can be done inside them. However, in preparation for the switch to High Definition, the chimneys are now made of real brick.[when?][citation needed] 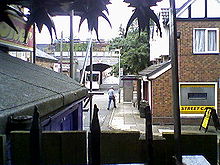 Part of the Coronation Street set.

In the following years staircases were added inside the doors of the houses. A number of Granada tower blocks dominate the skyline around the set. These are usually obscured through careful camera angles.

The door next to Audrey's salon leads to a flat above the salon itself, which is actually the supporting artists green room, and consists of two simple rooms, one with chairs and a sink/wash area for extras, and the other used as a costume change area.

Towards the end of the 1980s scenes filmed on the exterior set became more numerous after the show's location work switched from film to videotape in 1988,[6] although some outdoor video shooting, using large, tethered cameras, had been trialled as early as 1977. More trials were conducted with a PSC (portable single camera) unit for the Rovers Return fire episode in 1986.

1989 saw large development of the Coronation Street set. The factory and Community Centre which had occupied the site since 1971 were demolished. Three new houses, two shop units, a garage and a factory were built on the site. These developments were the idea of new executive producer, David Liddiment.[7]

When the Granada Studios Tour was closed in 1999 the exterior set was extended and updated. The derelict Graffiti Club on Rosamund Street was revamped and reopened as a medical centre/surgery. A new street, Victoria Street, was built to house three shops and two houses. A builders' yard backing onto the betting shop was built. To obscure one of the Granada Television buildings a new viaduct was built on Rosamund Street. This sits behind the Rovers and parallel to Coronation Street; this introduced an error, as it does not appear in the opening titles aerial shots of Coronation Street. The "viaduct" is actually a façade with an optical illusion to make it look complete. A backdrop of some Salford streets was erected in 2005 allowing shots to be filmed looking up Rosamund Street and creating the illusion of other dwellings further along that street.

At the end of Coronation Street there is a fictitious tramline which has seen CGI trams used over it in the past (notably the opening titles and when Kelly Crabtree left the long running drama.) However in the past when filming in the backyards the end of the "bridge" has been quite clearly seen which may explain the erection in a facade of houses to hide this fact. The storyline for December 2010 (Coronation Street's fiftieth anniversary) showed the viaduct collapse, sending the tram onto the cobbles, demolishing the Kabin and the Corner Shop in the process.

There has been speculation within the broadcasting industry over the future location of the permanent set, as ITV have been mulling plans for the whole of the Quay Street site. One of many options under active consideration includes moving Granada to a new headquarters in Trafford Park, across the water from the forthcoming MediaCityUK in Salford, which would result in the outdoor set moving permanently out of Manchester for the first time in its history. However, it is understood that there is some opposition within Granada to this proposal,[citation needed] with the alternative being a re-development of the main building, leaving the set, sound stages and The Bonded Warehouse (Granada's new headquarters) as they are. In March 2009, it was confirmed that Coronation Street would stay on the current Quay Street site "for the foreseeable future".[8] Following a change of hands at ITV management, talks between ITV and The Peel Group for the move to the Trafford Park site reopened in January 2010.[9] In December 2010 it was announced that the proposed move was now to take place. [10]

The majority of interior scenes are shot in the adjoining purpose-built studio, Stage One. The Stage One soundstage was constructed in 1990 next to the exterior set and it was the first time that the actors were given their own dressing rooms.[11] The interior sets were also moved into Stage One, with the Rovers, café and shops being erected permanently. The interior sets for the houses are constructed as required. The Stage One complex includes make-up and costume areas, and a Green Room.

The development of Stage One was as a result of the policy of then-producers David Liddiment and Mervyn Watson to update the show's production techniques.[7] The changes they introduced are still used as of 2010, although the schedules are much tighter due to the higher number of episodes now produced. This leaves almost no time for rehearsal or blocking and most scenes are shot very quickly. The resultant need for additional studio capacity meant the opening of Stage Two, located next to The Bonded Warehouse on the ITV site in what used to be the Baker Street building.

In an episode of Coronation Street in 2010 an editing error meant viewers could see "outside" via No.5's (Fiz and John Stapes' house) kitchen window showing what would be a "supporting" wall (quite possibly the painted brick wall backdrop) leaning against the studio walls. In another episode where Graham Proctor announced his relationship to Tina McIntyre's ex, David Platt, a brief shot of the Platts' kitchen showed no ceiling above it. It's not the first time such errors have occurred, in one episode where Alan Bradley attacked Rita Fairclough, viewers could see a studio light in what should be No.7's backyard.

Furthermore, the layouts of the interior sets would be unfeasible in the exterior sets. For example, the two windows by the fireplace in the Rover's interior set don't exist on the outdoor set; the stairs to the living quarters of the Rovers have changed from right to left to left to right and the toilets would be in Ken Barlow's house.

The architecture of Coronation Street was based on Archie Street, Ordsall, an area of Salford which has long been demolished. Archie Street appeared in the programme's original opening credits.

There is an Archie Street in Salford today, but not on the site of the original - which stood near St Clement's Church, Ordsall.

The original Archie Street is pictured on the Real 1970s website. The picture shows the street shortly before it was demolished in 1971. The site includes a picture of an adjacent church which still stands as of 2010.

According to the show's backstory the fictional Coronation Street was built in 1902, and named after the coronation of King Edward VII. The row of terrace houses is the only part of the street to remain relatively unaltered since 1902. The only real structural change to the terrace was in 1965 when number 7 collapsed due to old mine-workings under it. After the collapse the site remained vacant with a park bench placed in the gap between numbers 5 and 9. A new house was constructed on the site in 1982.

The other side of the street has been the site of several different building developments. The original Hardcastle's Mill building constructed in 1882 was the location of Elliston's Raincoat Factory in the series. The building was demolished in 1968 along with the Glad Tidings Mission Hall, to make way for new maisonette houses. The maisonettes were demolished in 1971 and replaced by the Mark Brittain Warehouse and a new community centre. 1989 saw a radical redevelopment of Coronation Street when the factory and community centre were demolished and replaced by three new houses, two shop units, a garage and a factory. They all stood until 2010, when a derailed tram crashed through both D&S Alahan's and The Kabin.

Parking for the Prop vehicles are located where you'd expect the West end of Crimea Street to be. This is where most cars, buses and other vehicles are seen to be heading towards when leaving the street via Viaduct Street, however those that leave via Victoria Street are in reality heading to a dead end where the Granada Bonded Warehouse is.