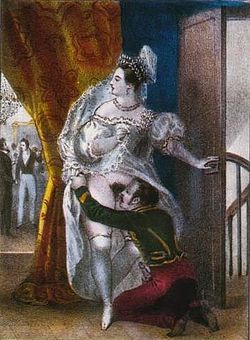 The term is derived from the Latin words for the vulva (cunnus) and tongue (lingua).

The clitoris is the most sexually sensitive erogenous zone for most women, but may be too sensitive to pleasantly stimulate directly at times, especially in early stages of arousal. Author Shere Hite notes in The Hite Report that most women achieve orgasm easily from clitoral stimulation as part of cunnilingus.[2] Some sex manuals recommend beginning with a gentler, less focused stimulation of the labia and the whole genital area. The tip, blade, or underside of the tongue may be used, as can the nose, chin, teeth and lips. Movements can be slow or fast, regular or erratic, firm or soft, according to the participants' preferences. The tongue can be inserted into the vagina, either stiffened or moving. The performing partner may also hum to produce vibration. 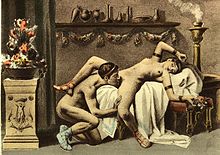 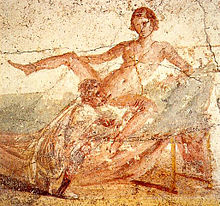 The Great Medicine of the Three Mountain Peaks is to be found in the body of the woman and is composed of three juices, or essences: one from the woman's mouth, another from her breasts, and the third, the most powerful, from the Grotto of the White Tiger, which is at the Peak of the Purple Mushroom (the mons veneris). 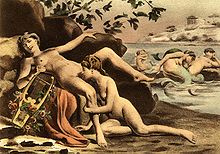 According to Philip Rawson (in Paz, p. 97), these half-poetic, half-medicinal metaphors explain the popularity of cunnilingus among people: "The practice was an excellent method of imbibing the precious feminine fluid" (Paz, p. 97). But the Taoist ideal is not just about the male being enriched by female secretions; the female also benefits from her communion with the male, a feature that has led the sinologist, Kristofer Schipper, to denounce the ancient handbooks on the "Art of the Bedroom" as embracing a "kind of glorified male vampirism" that is not truly Taoist at all.[5] Ideally, by mingling the male and female liquids the Taoist aims to reconcile opposites and to recapture the mythical time that existed before the division of the sexes, the primordial time of the original ch'i.

The religious historian Mircea Eliade speaks of a similar desire to transcend old age and death, and achieve a state of nirvana, in the Hindu practice of Tantric yoga. In Tantric yoga, the same emphasis is placed on the retention and absorption of vital liquids and Sanskrit texts describe how the male semen must not be emitted if the yogi is to avoid falling under law of time and death.[6]

STD, oral cancer, and other risks

In 2005, a research study at the College of Malmö in Sweden suggested that performing unprotected oral sex on a person infected with HPV might increase the risk of oral cancer. The study found that 36% of the cancer patients had HPV compared to only 1 percent of the healthy control group.[12]

Another recent study in the New England Journal of Medicine suggests a correlation between oral sex and throat cancer. It is believed that this is due to the transmission of human papillomavirus or (HPV) because this virus has been implicated in the majority of cervical cancers. The study concludes that people who had one to five oral sex partners in their lifetime had approximately a doubled risk of throat cancer compared with those who never engaged in this activity, and those with more than five oral-sex partners had a 250% increased risk.[13]

In addition, in rare cases, air being blown into the vagina can be harmful to the receiver, even fatal. Air that is very forcefully blown in and not adequately released could enter the bloodstream through capillaries in the uterine wall, causing an air embolism. It should also be noted that probability of an air embolism developing is elevated, though still relatively low, during pregnancy (in the case of the receiver).

Cunnilingus as ceremonial public spectacle : A man "threw the woman to the ground and her skirt was removed. ... She was then ordered to stand up with legs apart. The man was forced to squat between them and told to put his mouth to her vulva. After he had done this, a sweet potato would be placed into the woman's vagina and the man was forced to nibble at this until he had completely eaten it. Finally, the man was ordered to lie down on his back, while the woman was made to squat over him, placing her vulva to his mouth. He was told to suck out the fluids, swallowing them."[29]