David of Scotland, Earl of Huntingdon

David of Scotland, Earl of Huntingdon 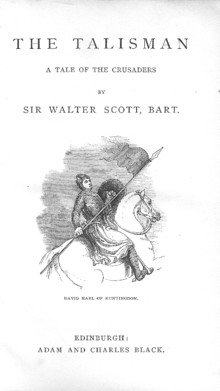 David of Scotland pictured in Sir Walter Scott's 1832 crusader novel The Talisman. Although emphasising his own story is fiction, Scott's Introduction states that David did go on crusade with Richard the Lionheart "and was the hero of some very romantic adventures on his way home".

He was the youngest surviving son of Henry of Scotland, 3rd Earl of Huntingdon and Ada de Warenne, a daughter of William de Warenne, 2nd Earl of Surrey, and Elizabeth of Vermandois. His paternal grandfather was David I of Scotland. Huntingdon was granted to him after his elder brother William I of Scotland ascended the throne. David's son John succeeded him to the earldom.

In the litigation for succession to the crown of Scotland in 1290–1292, the great-great-grandson Floris V, Count of Holland of David's sister, Ada, claimed that David had renounced his hereditary rights to the throne of Scotland. He therefore declared that his claim to the throne had priority over David's descendants. However, no explanation or firm evidence for the supposed renounciation could be provided.

On 26 August 1190 David married Matilda of Chester, daughter of Hugh de Kevelioc, 3rd Earl of Chester. He was almost thirty years Matilda's senior. The marriage was recorded by Benedict of Peterborough.[1]

David and Matilda had seven children:

After the extinction of the senior line of the Scottish royal house in 1290, when the legitimate line of William the Lion of Scotland ended, David's descendants were the prime candidates for the throne. The two most notable claimants to the throne, Robert Bruce, 5th Lord of Annandale (grandfather of King Robert I of Scotland) and John of Scotland were his descendants through David's daughters Isobel and Margaret, respectively.

David is a possible inspiration figure for the Robin Hood legend because the legend plays at the same time as David lived in the 1190s. Another similarity is the Earl of Huntingdon question, because a historian names Robin Hood as a possible Earl of that area. Also both had taken part in the Third Crusade and by 1194 David had taken part at the siege of Nottingham Castle where the High Sheriff of Nottinghamshire and Derby County was taken captive. His son Robert who died young was also a possible inspiration for Robin Hood.