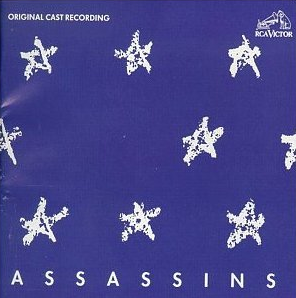 "Assassins" is a musical with music and lyrics by and book by , based on an idea by Charles Gilbert, Jr. It uses the premise of a murderous carnival game to produce a -style portrayal of men and women who attempted to assassinate Presidents of the United States. The music varies to reflect the popular music of the eras depicted.

"Assassins" opened at on , with seventy-three performances under ' direction. The cast included , , Patrick Cassidy, , , and . The run sold out.

On October 29, 1992, "Assassins" opened in London at the with a cast that included as Charles Guiteau and as Sara Jane Moore. The show ran for 76 performances, closing on January 9, 1993. [cite web | author=Michael H. Hutchins | title=Assassins | url=http://www.sondheimguide.com/assassins.html#London | work=The Steven Sondheim Reference Guide | date=2008 | accessdate=2008-08-09]

Other professional productions have included a 2008 production at the Landor Theatre, London, UK.Fact|date=April 2008

The three versions (original, London and Broadway) were not identical, as roles were combined, and the song "Something Just Broke" was new to the London production. [cite web | author= | title=Assassins | url=http://www.sondheim.com/shows/assassins | work=Sondheim.com | date=2008 | accessdate=2008-08-09] In 1991, Theatre Communications Group published the libretto, which did not feature "Something Just Broke".

In the 2004 Broadway production, Scene 3 (at the bar), was slightly changed: In the old version, Hinckley knocked over the bottle when he slammed a copy of Guiteau's book on the bar, in the revival, he knocked it over when Fromme was looking over his shoulder; when Czolgosz can't break the glass bottle, in the old version, he puts it back down, but in the revival, Booth ends up breaking it himself; and in the old version, Fromme and Moore were not present in the scene, as opposed to the Roundabout production of 2004. Fromme did not quote Reagan, mocking Hinckley, as he missed his target in the 2004 show; rather, the Proprietor performing a voice impression of Reagan appears and speaks the lines into a microphone.

The 2004 production did not use slides of historical photographs projected on a screen, as in past productions. The set resembled the enormous wooden frame of a rollercoaster. Under the frame was a shooting gallery. Instead of shooting at projected photographs of the presidents, the characters shot at silhouettes of each president presented as black and white target practice figures. Each presidential image was recognizable, and labeled with a number representing their consecutive order in American presidencies (Lincoln was 16, Kennedy was 35). If they hit their target successfully (in other words, if the president was killed), the figure lit up by surrounding chaser lights, and bells rang, as in a shooting gallery. If they missed their target (as in Hinckley's case), a loud, sustained buzzer was heard.

After Oswald successfully fired at Kennedy in the 2004 Broadway production, the Zapruder film of the assassination was projected onto his white T-shirt, in color.

;Fictional:
*The Proprietor - gun salesman who provides the characters with their weapons at the beginning of the show
*The Balladeer - narrator who provides the stories of the assassins
*Ensemble - crowd members, chorus, etc.

"Assassins" opens in a fairground shooting gallery where, amid flashing lights, human figures trundle past on a conveyor belt. One by one, a collection of misfits enter the stage, where the "Proprietor" of the game entices them to play, promising that their problems will be solved by killing a President. ("Everybody’s Got the Right"). , John Hinckley, Charles Guiteau, , , Lynette "Squeaky" Fromme, and are given their guns one by one. enters last. The Proprietor introduces him to the others as their pioneer and begins distributing ammunition. The assassins take aim as "" heralds 's offstage arrival. Booth excuses himself, a shot rings out and Booth shouts, "!"

In Scene 2, the Balladeer tells John Wilkes Booth's story ("The Ballad of Booth"). Booth is writing his rationale for murder in his diary but the Balladeer interjects that Booth's motives really had more to do with his personal problems. When Booth is wounded by a pursuing Union soldier he throws the Balladeer his diary so that he can tell his story to the world. The Balladeer reads out Booth’s self-justifications as Booth commits suicide. The Balladeer concludes that Booth was a madman whose legacy was butchery and treason and that in trying to destroy Lincoln, Booth elevated him to legend.

In Scene 3, Booth, Czolgosz, Hinckley, Zangara and Guiteau gather in a bar. Byck enters, asks if Richard Nixon has been seen around the bar, and leaves when he receives a negative answer. Guiteau toasts to the American Dream, telling of his ambition to become Ambassador to France. Zangara complains about his stomach pains, and Booth suggests fixing them by shooting the President. Hinckley accidentally breaks a beer bottle and Czolgosz flies into a rage, describing the horrors he sees in the bottle factory he works in, and how many men die or are injured just to make a bottle like the one Hinckley has just broken. Booth urges him to take control of his fate, and to break a bottle himself. But Czolgosz cannot.

Scene 4 opens with a radio report that Zangara has tried to assassinate . Five "Bystanders" are interviewed in turn, telling the audience their personal versions of the event; each is convinced that he or she personally saved the President ("How I Saved Roosevelt"). From an electric chair Zangara sings his refusal to be afraid and that he hadn't cared who he killed as long as it was one of the men who control the money. Peeved that as an "American Nothing" he has no photographers at his execution, Zangara is electrocuted.

In Scene 5, American leader gives a lecture from offstage as Leon Czolgosz listens, enraptured. He introduces himself to her and declares his love. She tells him to redirect his passion to the fight for social justice. She protests at his offer to carry her bag saying, "They make us servants, Leon. We do not make servants of each other," but he insists.

In Scene 6, Fromme and Moore meet on a park bench. Fromme smokes a joint and speaks of , remembering how they met and declaring herself his lover and slave. Juggling her purse, a can of Tab and a bucket of , Moore claims she is an informant for the (or used to be), has been a , had five husbands and three children, and suffers from . Fromme declares that Manson will emerge as king of a new order and make her his queen. Moore says she thinks she knew Manson when he was younger. The scene ends as they both give the evil eye then shoot the bucket of chicken to pieces.

Czolgosz appears in Scene 7, reflecting on how many men die in the mines, the iron mills and the steel forge just to make a gun. Booth, Guiteau and Moore enter one by one and join him in a in which they point out one gun's power to change the world ("Gun Song"). Czolgosz decides his gun will claim one more victim: the President.

In Scene 8, we see Czolgosz at the 1901 watching shake visitors' hands in the Temple of Music Pavilion. The Balladeer sings "The Ballad of Czolgosz" as Czolgosz joins the receiving line. When Czolgosz reaches McKinley he shoots him.

In Scene 9 Samuel Byck sits on a park bench in a dirty Santa suit with a picket sign and a shopping bag. He talks into a tape recorder, preparing a message to telling Bernstein he can save the world by writing more love songs. Then he accuses Bernstein of ignoring him, just like the other celebrities.

In Scene 10, Squeaky Fromme and John Hinckley sit together in Hinckley's rumpus room exchanging reflections about their love objects, Charles Manson and . Fromme mocks Hinckley for being in love with a woman he's never met and he orders her out. After she goes, he sings ("Unworthy of Your Love"). Fromme returns to join him, singing of her love for Manson. Hinckley shoots at a photograph of projected on the wall but the picture keeps reappearing. Fromme mocks Hinckley, quoting Reagan's famous quips about the assassination, as Hinckley fires and fires, missing each time.

In Scene 11 Charles Guiteau flirts with Sarah Jane Moore, giving her marksmanship tips before trying to kiss her. When she rebuffs him he goes to meet at the train station. Guiteau asks to be made Ambassador to France, and when he is rebuffed, shoots the President.

Immediately following, Scene 12 shows Guiteau at the foot of the gallows singing a poem, written that morning, that he calls "I Am Going To The Lordy". The Balladeer describes his trial and execution ("The Ballad of Guiteau") as Guiteau cheerfully s up the stairs to the gallows, optimistically singing of heaven. Guiteau is hanged.

In Scene 13 Squeaky Fromme and Sara Jane Moore prepare to assassinate . Moore has brought along her nine-year-old son and her dog. The President enters and attempts to help Moore collect her dropped bullets; she fails to assassinate him. Next Fromme tries, but her gun fails to go off. Moore resorts to throwing her bullets at him.

In Scene 14, Samuel Byck is on his way to the airport to hijack a plane, which he plans to crash dive into the . He records a message addressed to , complaining about contemporary American life and announces that killing a President is the only solution.

In Scene 15 crowd noises supply a wordless lamentation for the victims of the assassins as the assassins reiterate their motives, and demand their prizes. The Balladeer tells them that their actions didn't solve their problems or the country's and that if they want their prizes they must follow the American Dream. The assassins realize that they will never get their prizes and unite with "Another National Anthem", which grows louder and louder as they force the Balladeer offstage, a song to be sung by all Americans dispossessed by the dream.

In Scene 16, appears, preparing to kill himself in a storeroom on the sixth floor of the . Booth interrupts him and convinces him to murder instead. Summoning the other assassins from the shadows, Booth tells Oswald that by joining them he will become part of the American experience, but Oswald refuses. Booth tells him that in the future, when Hinckley’s room is searched, Oswald's biographies will be found. Summoning the voices of , and , Booth tells Oswald that the key to the future is in his hands. Oswald tries to leave, but Zangara addresses him passionately in Italian, a speech translated by the other assassins, imploring him to act so their own acts can come alive again. He has power. He can close the New York Stock Exchange, cause worldwide grief, inspire, finally, passion about a man the world has never cared about. As the assassins sing, imploring Oswald to act, he crouches at the window and shoots ("November 22, 1963").

Scene 17 was not included in the original, but added to the London production by Sondheim and Weidman. In this scene, six Americans recount how they remember where they were and what they were doing when they heard Presidents Kennedy, Garfield, McKinley, and Lincoln had been shot ("Something Just Broke").

In Scene 18, the assassins reappear, now with Oswald in their ranks. They restate their motto ("Everybody's Got the Right" (reprise)) and fire their guns at the audience.

By developing the characters of historic assassins out of the slim biographical information found in the daily news, "Assassins" prompts us to consider their motivation. "(Sondheim) confronts pain in order to cauterize the decay and heal the sicknesses which lurk at the core of our society". Departing from the humanism of his previous musical "", Sondheim suggests that political murderers are a product of the American political culture (). [cite book | last=Gordon | first=Joanne | coauthors= | title=Art Isn't Easy: The Theater of Stephen Sondheim | pages=318, 337 | edition=First edition | location=New York | publisher=DaCapo Press, Inc | year=1990 | isbn=0306804689]

Historian and commentator introduced her 2005 analysis of the Lincoln, McKinley and Garfield murders, "", with a journey from New York City into New England to attend a performance of "Assassins", the musical prompting her writing of the book (Vowell 2005).