He is also the inspiration of The Inspector, the main character in a series of short animated cartoons inspired by the titles of the feature films. Though the Inspector in the animated late 1960s series was never given a name, he is clearly based on Clouseau. However, more recent animated depictions of Chief Inspector Clouseau since the 1970s on were redesigned to resemble Sellers, and later Martin, more closely.

Clouseau is the bumbling and incompetent police inspector of the French Sûreté, whose investigations are marked with chaos and destruction that he himself largely causes. His clumsy attempts at solving the case frequently lead to misfortune for himself and others; in the 1976 film The Pink Panther Strikes Again, he cannot even interview witnesses to a crime without falling down stairs, getting his hand caught in first a medieval knight's gauntlet and then a vase, knocking a witness senseless (and voiceless), destroying a priceless piano or accidentally shooting another officer in the backside. Clouseau is also not particularly intelligent, and will frequently follow a completely idiotic theory of the crime, solving the case only by accident. His incompetence, clumsiness and stupidity, the fact that he is usually right, and his ability to always survive perilous situations are enough to eventually transform his direct superior (former Chief Inspector Dreyfus) into a homicidal psychopath – to such a degree that Dreyfus even goes so far as to construct a doomsday device and threatens to destroy the world in a desperate attempt to kill Clouseau.

Regardless of his rather limited ability, he successfully solves his cases and finds the correct culprits, even if this success is achieved entirely by accident. As such, he is even promoted to Chief Inspector over the course of the series, and is regarded by many other characters who presumably have not met him as France’s greatest detective; those characters he actually encounters, nevertheless, are quick to realise his incompetence and limitations. He is immensely egocentric and pompous; despite his many failings, he is seemingly convinced that he is a brilliant police officer destined to succeed and rise through the ranks of the Sûreté. Despite this, Clouseau does appear to show some awareness that he is not the most competent or intelligent person, as he is notably embarrassed by and quick to brush aside his more extreme acts of clumsiness with phrases such as "I know that", and attempts to appear elegant and refined regardless of what calamity he has just caused.

In the Steve Martin incarnation, however, although he can be very eccentric, arrogant and accident-prone, he is a lot more competent and clever detective than in the original movies, being able to deduce in the end who is the main villain behind the crimes depicted.

Chief Inspector Clouseau is a patriotic Frenchman; his country is professedly his highest priority. The later films reveal he had fought in the French Resistance during the Second World War. He has been prone to infatuation (which is often reciprocated) ever since being cuckolded by Sir Charles Lytton. He is repeatedly perplexed by transvestites, to the extent that he addresses them as "Sir or Madam".

Sellers said in several interviews that the secret of Clouseau’s character was his tremendous ego. His favourite example of Clouseau’s ego was that, whenever someone said, "Phone call for Inspector Clouseau", Clouseau would reply, "Ah yes, that would be for ME." Sellers maintained that Clouseau’s ego is what made the character's klutziness funnier because of his quest to remain elegant and refined while causing chaos everywhere he turned.[citation needed]

As portrayed by Sellers, Clouseau’s French accent became steadily more exaggerated in successive films (for example, pronouncing "room" as "reum"; "Pope" as "Peup"; "bomb" as "beumb"; and "bumps" as "beumps"), and a frequent running gag in the movies was that even French characters would have difficulty understanding what he was saying. The accent may originally have been inspired by a comment by a French film director, in which he pronounced "house" as "'arse," to Sellers's fellow Goon, Michael Bentine, at a dinner party.[citation needed] Much of that humour was of course lost in the French dubbing: in order to keep some of Seller's characterization, the French post-synchronization gave Clouseau an odd-sounding, nasal voice. Also, Clouseau goes by more names than "Inspector Clouseau", or "Clouseau". Clouseau often goes by his alias, Professor "Guy Gadbois" as in Clouseau's accent it is more like "Gie Gadwaa".

In his earliest appearances, Clouseau is actually (only slightly) less inept and exaggerated; some of the above character elements were not added until the 1970s.[citation needed]

Jacques Clouseau makes his first appearance as the Inspector in the 1963 film The Pink Panther, which was released in the United States in 1964. In this movie, the main focus was on David Niven's role as Sir Charles Lytton, the infamous jewel thief nicknamed "the Phantom", and his plan to steal the Pink Panther diamond. The Inspector Clouseau character plays only a supporting role as Lytton's incompetent antagonist, and provides slapstick comic relief.

Unlike all other Sellers' movies, Clouseau is married. His wife, Simone (Capucine), unknown to Clouseau, is Sir Charles' lover and helps him in his crimes.

A Shot in the Dark (1964) was based upon a stage play into which the Clouseau character was inserted. In this film, Sellers started to present the idiosyncratically exaggerated French accent that became a hallmark of the character. The film also introduces his boss, Commissioner Dreyfus (Herbert Lom), who is frequently driven mad by Clouseau's bungling, and his long-suffering Chinese servant, Cato (Burt Kwouk), who is instructed by Clouseau to attack him when least expected to sharpen his martial arts skills.

Sellers stepped away from playing the character following this movie, and would only return in The Return of the Pink Panther (1975) and the subsequent sequels.

When the character returned for the 1968 film Inspector Clouseau, he was portrayed by American actor Alan Arkin; Edwards was not involved in this production. The film's title credits, animated by DePatie-Freleng Enterprises, feature their Inspector character from the series of short cartoons under that name.

The 1968 film does appear to have had an impact on the Clouseau character when Sellers returned to the role in 1975's The Return of the Pink Panther, particularly in the character's mode of dress. The opening credits were animated by Richard Williams, featuring Clouseau once again seeking to retrieve the Pink Panther diamond after it is stolen by the Phantom.

The Pink Panther Strikes Again continues the story from the end of The Return of the Pink Panther, featuring the now-insane Dreyfus creating a crime syndicate and constructing a doomsday machine with the intention of using it to blackmail the world to kill Clouseau. Footage shot for this film was used to include Sellers in Trail of the Pink Panther. The opening credits were again animated by Richard Williams.

According to DVD liner notes for Return of the Pink Panther, Sellers and Edwards originally planned to produce a British television series centered on Clouseau, but a film was made instead, Revenge of the Pink Panther, which ignores Dreyfus's death in the previous film and has Clouseau investigating a plot to kill him after a transvestite criminal is killed in his place. The movie was a box office success and led to several more films after Sellers died in 1980; biographies of Sellers such as Peter Sellers—A Celebration reveal that he was involved in the pre-production of another Clouseau film, The Romance Of The Pink Panther at the time of his death.

Blake Edwards attempted to continue telling Clouseau's story despite losing his lead actor. The 1982 film Trail of the Pink Panther utilized outtakes and alternate footage of Sellers as Clouseau in a new storyline in which a reporter (played by Joanna Lumley) investigates Clouseau's disappearance. In the process, she interviews characters from past Clouseau films, and also meets Clouseau's equally inept father (played by Richard Mulligan).

The immediate sequel to Trail, Curse of the Pink Panther reveals that Clouseau underwent plastic surgery to change his appearance; the character appears on screen briefly in the form of a joke cameo appearance by Roger Moore, billed as "Turk Thrust II". Neither film was a box office success, and the series (and the character) were retired.

Despite the failure of Curse, Edwards attempted to revive the series a decade later with Son of the Pink Panther, in which it is revealed that Clouseau had illegitimate children by Maria Gambrelli (a character who first appeared in A Shot in the Dark). Clouseau's son, Jacques Jr., was portrayed by Roberto Benigni, and has a twin sister, Jacqueline, played by Nicoletta Braschi. Jacques Jr. attempts to follow in his father's police footsteps, but is revealed to have inherited the same ineptness as his father. 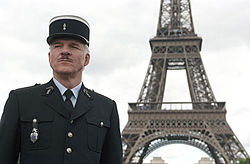 Steve Martin's rendition of Clouseau in the 2006 film is considered to be a rebooting of the character. The film gives an origin to his role as an inspector: originally an inept police officer, he is hired by Chief Inspector Dreyfus to serve as the public investigator into a high-publicity murder so that Dreyfus can carry out his own investigation behind the scenes without risking looking bad if he can't solve anything. However, the new film is set in a different continuity: Martin's Clouseau is considerably older than Sellers', and although the 2006 film was promoted as taking place prior to the events of the first Pink Panther film, the time frame has been advanced to the present day.

Also, in this film, although clueless, Martin's Clouseau does not seem entirely incompetent, being able to locate the Pink Panther diamond and solve the case on his own through his knowledge of such obscure facts as a Russian army rule that all members must know the location of a specific part of the brain or a clear knowledge of Chinese. He has limited detecting skills, but is good deal more street smart than Sellers's Clouseau.

When a series of rare and historical artifacts are stolen by the mysterious Il Tornado, Clouseau is assigned to a "dream team" of international investigators to recover the artifacts and the Pink Panther; the film culminates in his marriage to Nicole, Dreyfus's secretary.[1]